Toward the end of last year, I found myself preaching a series of three sermons on the “Life and Times of Elijah the prophet” (see here). Having been brought up in the Plymouth Brethren and had learned to appreciate and see the relevance of many of the lesser known passages of the Old Testament, I saw this as a welcomed challenge to delve into this section of the Bible and found myself once again enthralled as I studied again and later preached on the pertinent scriptures, notably 1Kings 17 – 2Kings 2.

I was then approached to do a series of Bible studies at our mid week meeting (it turned out over a period of 5 weeks) and I suggested it be a sequel to what I had preached on, this time “the Life and Times of Elisha the prophet” (Elijah’s successor), the pertinent scriptures in this case being 1Kings 19 and 2Kings 2-13.

The subjects I took were: 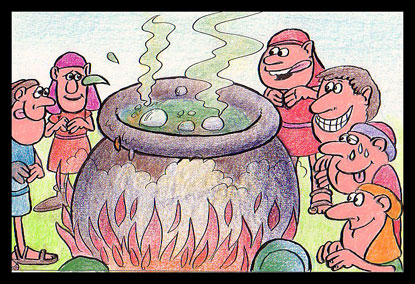 Because of time shortage, I did not get to cover the “Death in the Pot” story (2Kings 4: 38-41). And since it was relevant and had been preached on in the past, I decided I would preach on the story at the next opportunity (last Sunday) (for my death in the Pot presentation (see here)). I came to discover many sermons have been preached on “Death in the Pot” (see YouTube), including by well known preachers, with a variety of thoughts expressed. It seemed to me the main lesson I should draw out was that the Pot and what was in it (various food items) was important and its contents would have been nourishing except for a rogue item that was unwittingly introduced that brought about “death”. Until such contamination is dealt with, however good and wholesome our Christian testimony might be (as what happened in this case when Elisha, quietly, assuredly added the flour to neutralize the poison), we will not make much progress in our testimony for the Lord until we can eliminate or neutralize all the bad stuff, and by God’s grace, that is possible.