On the day the UK was meant (yet again) to leave the EU (31st October 2019) the Bill to call a General Election (on 12th December, i.e. in 3 days time) received its Royal Assent. It was generally recognized that a General Election was going to happen given the many parliamentary impasses that had taken place in the past several months and it was only a matter of time and political expediency when the election would be called – all because Parliament could not agree a way forward on Brexit. Although Brexit hasn’t been spoken about as much as one might expect (likely people are Brexit weary) this election was presented as a vote on Brexit, although the details and implications of the withdrawal agreement has hardly been discussed, letting all leaders including Boris off the hook,  but there are many other issues aired, notably the NHS.

While I was pretty sure that I wanted to Brexit to happen and knew it wouldn’t under Labour or Lib Dems, I wasn’t even sure of the Conservatives, given the Boris deal still tied us in with the EU, and it wasn’t clear what part the Brexit Party would take in the election. I was open and decided I would do my bit as a responsible, intelligent voter and weigh up all the pros and cons (a nigh impossible task) before making up my mind. While I have followed only a fraction of the debates etc. and have once again and unsurprisingly seen the propensity of candidates to promise much and resort to sound bites and spin, I have now done my bit, and barring some unforeseen major development can now explain my hopes and expectations for this election, both nationally and for my own home town. Checking out the latest polls, the Conservatives are expected to win the election with a comfortable overall majority, but then again polls can be wrong and this time round there will be a lot of tactical voting.

What I write from now on is my own personal opinion and I recognize better people than me will disagree, but at least I will show my reasoning process and encourage others to do the same. I am also mindful the country is divided not just over whether to remain in or leave the EU but over a host of issues, especially noting my community activist mantra – on social justice. I am not a big fan of Boris and his Conservatives but I still prefer them to Labour or worse still an unholy alliance drawing in from the SNP and the LibDems. Besides not being altogether convinced on Boris deal, I have qualms over the social injustices I see in today’s Britain. While I am not convinced things overall would have been better under Labour or will improve if Labour were elected, I have qualms. While I recognize Boris needs a majority to “get Brexit done” and carry out what was announced in the Queen’s speech, I think someone should hold him in check so we don’t end up with a half baked deal that ties us into the EU. I had hoped it would be the Brexit Party, although if pollsters are to be believed that is unlikely. None of the leaders have wowed me and all have been caught short one way or another, although it is Nigel Farage who has impressed me most.

So I now return to the local scene and how I would vote. If I could vote in Southend West, it would be for David Amess, not that he needs my vote given his seat is as safe Conservative as it can be. Two factors especially stand out regarding David who I have found very supportive and have come to esteem over the years: he shares many of my values e.g. concerning abortion, sex and marriage and religious freedom and he is imho a very good constituency MP, which regretably I can’t say with any confidence regarding the Southend East incumbent. I should add though that I was impressed by his Labour rival, Aston Line, and I have little doubt his time will come. I also note my old friend, Tom Darwood, is standing, whose principles I respect but whose chances are miniscule.

Rochford and Southend East is more problematical though. I have already said I would NOT vote for James Duddridge because of his non attendance at hustings and meaningful community meetings. If I thought he was a good constituency MP, like his West counterpart and his East predecessor (Teddy Taylor), I might change my mind, although in fairness he has done some good, including doing an unheralded volunteer stint at the night shelter I manage, when he was superb. I feel I can’t vote by way of protest. Not only don’t I like LibDems, but I found their candidate to be underwhelming. Jason (youcantbeserious) Pilley of the Psychedelic Party is pushing too many wacky ideas to entertain, and while I like what Dr Kumar, the independent guy, wrote about the NHS, that is ALL he has pronounced on. Which brings me to Ashley Dalton (Labour), James only serious rival and why, despite the get Brexit done factor, I am reverting to an old principle, which is to put person before party. 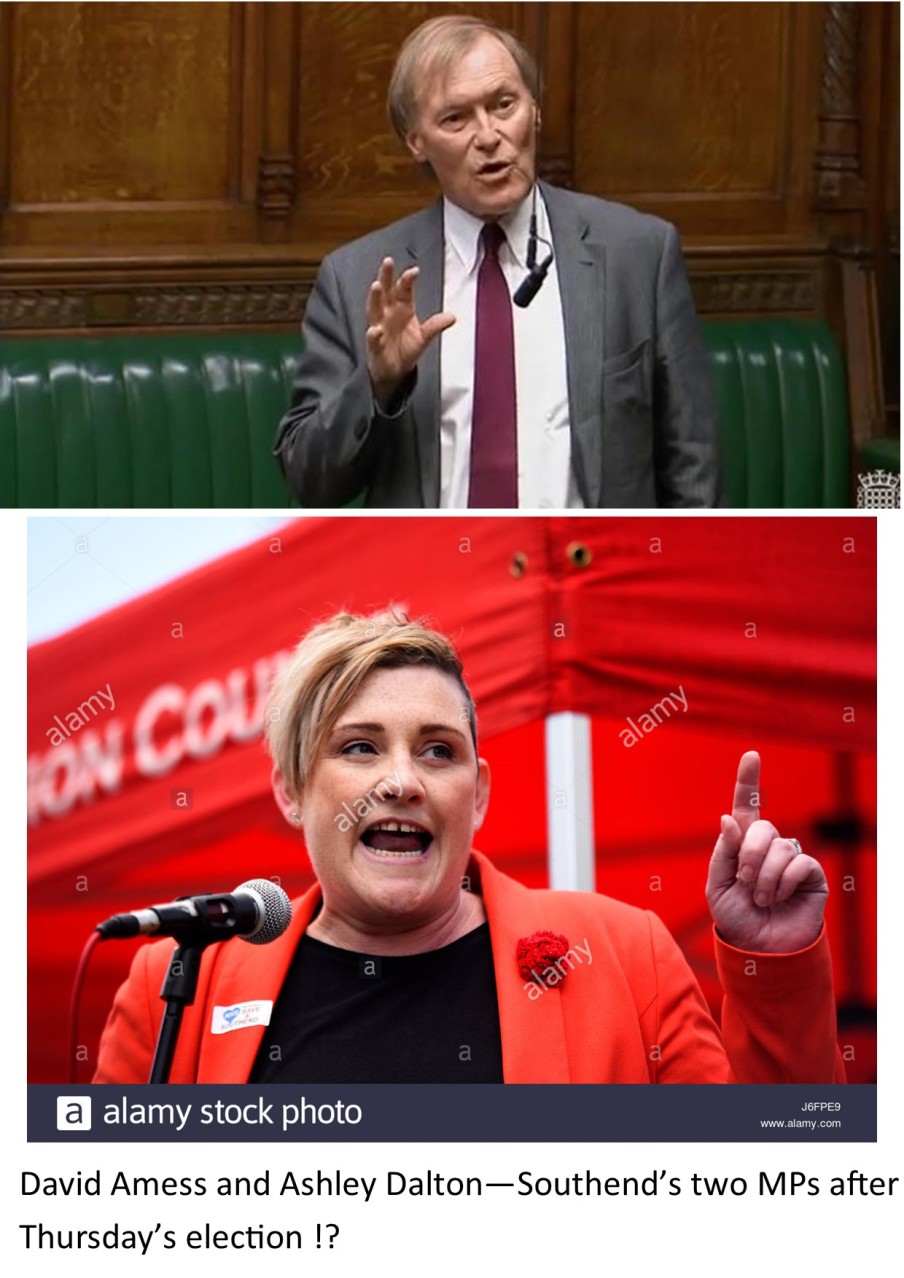 I have known Ashley for 20 years and our paths have often crossed (and occasionally swords) in our community activities. But I have the greatest respect for someone I have come to regard as a friend, even though politically I may be closer to James than I am Ashley. I think she would make a fantastic MP. She combines passion, energy, empathy, intelligence and winsomeness. I like the way she has her finger on the pulse as to what is going on in Southend and I have little doubt she will try to do her best for the town, whether standing up for Southend Hospital, calling for social housing to be built on Fossets Farm or trying to save the ambulance station in Shoebury. Given my history of endorsing candidates usually ends in the kiss of death, all I can add is vote but not for the other four candidates. At this time when many good, thoughtful people feel disenfranchised, my final point is to put your trust in God; not politicians or parties.