Yesterday, I published my latest blog rant (see here) and one of the groups I had a go at were well known Christian leaders who I uncomplimentary described as “woke”. A friend enquired what I meant by “woke”. Where better to turn than omniscient Wikipedia, which states: “Woke as a political term of African American origin, refers to a perceived awareness of issues concerning social justice and racial justice. It derives from the African-American Vernacular English expression “stay woke”, whose grammatical aspect refers to a continuing awareness of these issues. By the late 2010s, woke had been adopted as a more generic slang term broadly associated with left-wing politics, socially liberal causes, feminism, LGBT activism, and cultural issues (with the terms woke culture and woke politics also being used). It has been the subject of memes, ironic usage and criticism. Its widespread use since 2014 is a result of the Black Lives Matter movement”. 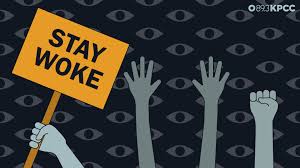 I have lived long enough to have seen different popular phrases being commonly used, only to be usurped by a new one. Right now, we live in the day of “woke”, which in fairness is more often than not used pejoratively by non-liberals regarding liberals. The reason I got into righteous indignation mode was that those same Christian leaders, keen to be seen as inclusive, fair minded, and on the side of the oppressed and marginalized etc. by espousing causes included in the above definition have neglected things that Christians have traditionally been and supposedly meant to be concerned about. I am thinking of things like preaching the gospel, calling sinners to repent, standing on behalf of persecuted Christian, standing on behalf of the unborn and calling out societal wickedness. When it comes to the hot potato issues of our day, e.g. Brexit, Trump, Islam, race, LBGT, climate change, immigration, globalism, popularism, socialism my guess is that more often than not divided opinions will often be along the lines of whether one is woke or non-woke.

Sadly, in recent years, I have seen a greater polarization among Christians on woke and anti woke related matters, although it may be too simplistic to place them in one or other camp. Indeed, there are issues Christian could and should come to an agreement and work together on. One of these is immigration, a subject that in my early community activist days I was a lot into. But that will have to wait until my next blog. For the time being, I would urge Christians to seek out and run with the right causes, even if at the cost of being labelled woke or non woke, but more importantly to be awake to what is really going on. The only camp we should feel compelled to join is that of seeker after truth, righteousness and justice.