Three pieces of wisdom that has particularly influenced me in my community activism, my evolving view of the world and keeping my feet on the ground to make me more humble, are “things are often not as they seem”, “the more we know, the more we come to realize we don’t know” and “in general, there are at least two sides to any argument”. A further nugget of wisdom is what my father tried to install in me growing up: “two wrongs do not make a right”. As I hope will become evident, these all relate to what follows. 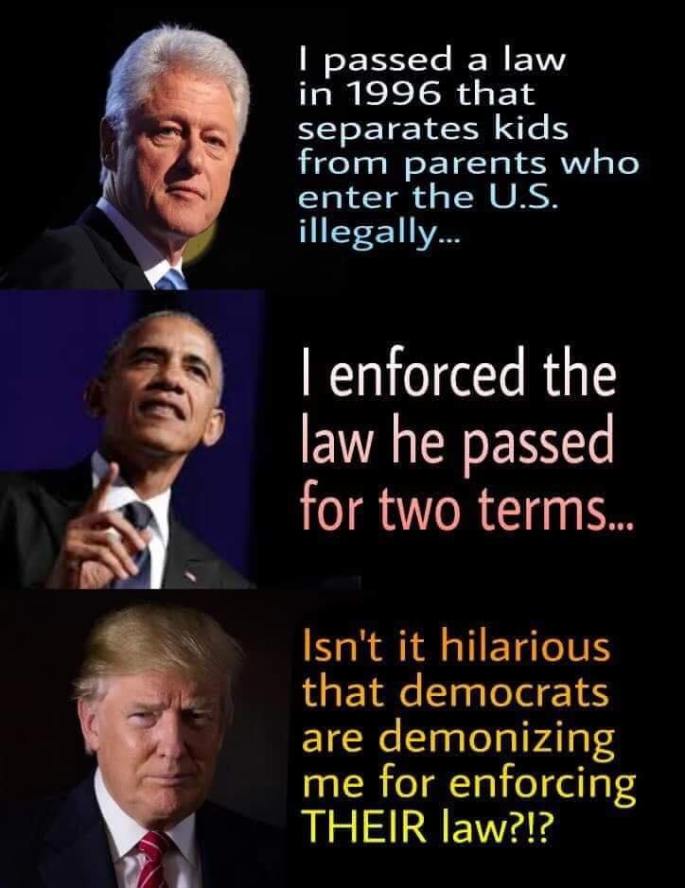 Before I discuss the meme above, which when I shared it a few days ago attracted comments, some unsupportive, I would like to set out my store on the subject that won’t go away: immigration, and offer my personal perspectives. I am less interested in point scoring so people reading this can I hope breathe a sigh of relief that they are not going to be got at, but rather invite questions, realizing the answers are often not as clear as we would like and if they are (to some) these will still accommodate a wide spectrum of views.

Immigration is an emotive subject both sides of the Pond and Trump has attracted a considerable amount of criticism for his plan to build a wall to keep out illegal immigrants from entering the USA via its Southern border with Mexico and implementing immigration bans from certain countries (mainly Muslim) where he deemed that it would be difficult to vet wannabe immigrants because due process for doing this was not entirely possible. Trump had argued that stopping immigrants coming into the country illegally or where it was not possible to adequately check their status was in essence a policy that was in force under his predecessors, except now his administration is operating a zero tolerance policy. His argument, which many agree with is, was that among the illegals crossing the border were criminal elements and his, what has sometimes been referred to as Muslim ban, is meant to restrict subversive elements. To what extent he should allow immigration (for who, from where) and how to deal with illegal entry is a debatable question.

Immigration, especially when pertaining to asylum seekers, has been something that has long interested me, and the consequences of which was something I have sought to practically address in my limited way in the UK, especially concerning those living under duress because they have no right to remain and have to deal with a broken system. It has often struck me that peoples’ views range between there being toward having no immigration whatsoever to allowing unrestricted immigration. My big gripe was the unjust way asylum seekers from countries like Zimbabwe were treated and yet entry to the country had been opened up more than was healthy for the common good to those from Eastern Europe and is now starting to happen from the Middle East, who had become refugees due to conflict in the region, whose net contribution to this country may be deemed as negative and as detrimentally likely to bring about change to the national character and standard of living.

Politicians have the somewhat daunting challenge of trying to satisfy people from both ends of the immigrants in or out debate and if you read my writings I have taken to task politicians from all sides on this matter and have noted when they try to make political capital in the immigration debate. Often there is a discrepancy between stated intention and actual delivery. While not my main reason for voting to leave the EU, the need to control immigration especially those who are less likely to make a positive contribution to what I see as the national good and create compliant citizens ripe for exploitation, was an important factor, and the more I see the more I hold that position. While I do not give Trump a free pass, he does understand these things in a way many European politicians do not.

This brings me to the delicate subject of children. One of the tragedies of any people displacement is how children are (mis)treated, who often suffer the most. Here in the UK we are still dealing with stranded migrants, including minors separated from their families, and that matter remains unresolved along with the wider one of millions made homeless because of conflict. But the matter of children is now become a huge one and on which to attack the Trump administration, especially by his many detractors, when it comes to illegal attempts the enter the USA over the Mexico border and when it comes to detaining those who have broken the law and separating children from their parents. While not wanting to justify the decision to separate families, it seems to me this is inevitable when the law is broken and when one seeks to rigorously uphold the law. Where there is room for debate is how are the children to be treated when “illegals” are apprehended.

Regarding the meme, which I posted in response to what I saw as unfair criticism of Trump even while not 100% in agreement with its accuracy, rebuttals of which included:

As that point, I was beginning to flounder because it seemed to point to the conclusion that Trump was a horrible man abusing his power by the despicable act of separating children from their parents. My wariness was many media outlets and Democrat politicians have a vested interest opposing Trump and less likely to be fair. But as I begun to search further afield, including alternative media, some of which the likes of Google and Facebook are seeking to shut down (ref. recent Congress hearings), I saw another side to interpreting what is going on, making me feel less bad about sharing my meme.

I will not spend time unraveling the arguments made in the above references, to which more can be added. I do not uncritically defend the Trump policy which is undoubtedly flawed and recognise more investigation is needed. I do, however, sympathize with Trump’s argument that given there are unresolved issues regarding immigration, it should be fixed through making appropriate laws, and the legislature have not dealt with this as they should for political reasons. I also feel it perfectly reasonable to restrict immigration and ensure people entering the country do so legally.

However, and going back to the John Oliver (a comedian normally I don’t much like because I find his sneering crass) argument, while Romans 13:1 does tell us to obey the law and disobeying the law does have consequences (like being separated from your family), Romans 13:9,10 reminds us we need to love our neighbour and arguably aspects of the rigid enforcement of Trump’s immigration policy have been and are unloving. Whatever ones views, immigration remains a delicate and contentious subject as does, having decided who to let in the country, ensuring those who do enter, do so legally.

One thought on “Separating children when coming to the USA illegally”