Given my age, it is unlikely I would be called up to fight in an army or take up arms to defend my family. I say this as words are cheap and those younger than me may have to make a difficult choice. 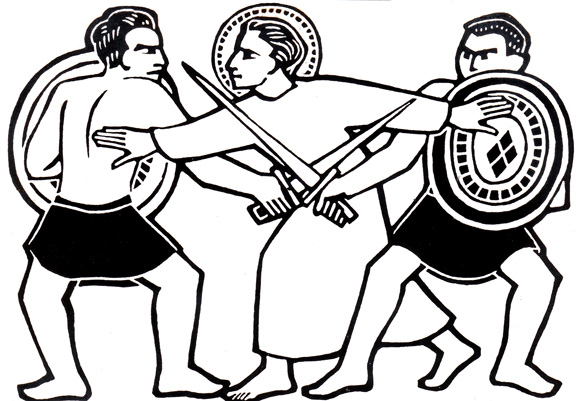 I have spent a lot of my church life in the Plymouth Brethren and when I came to research their history in my town I was surprised to learn how many had served in the Forces, particularly in the two World Wars and often carrying out front line duties. At the same time there were those who chose not to serve and suffer the consequences because they were conscientious objectors. From what I could make out, this did not cause falling outs and the church did not proscribe what people should or shouldn’t do. When in later years I joined a Strict Baptist church, I came to discover memorial boards of those who died fighting in those wars.

When I look back to my childhood and youth, while I got into fights, I came to realize fighting was not my forte and a better approach in cases of conflict was talk myself out of trouble, except I wasn’t much good at that either and as a result I was bullied and this left scars that took many years to heal. I have often pondered on when to fight and when not to fight, mindful Jesus words to turn the other cheek had caveats, especially when it came down to my life (or more pertinently the life of someone I had a duty of care toward) or the life of one seeking to cause injury or death. I then got to think of the Just War theory that some folk from my theological stable use to justify going to war. After all, what would have happened if we (I mean here the British) had NOT stood against Hitler and his Fascist ideology? Many point to greater suffering if we had not gone to war.

A friend shared an article he wrote titled “Thou shalt not kill” that contained a challenge to consider pacifism as a life-style choice. It made me think yet again what my choice would be. A lot of the article was taken up considering the case of one person that damaged jets destined for Saudi Arabia based in the UK. The rationale behind this was that these jets would be used to cause harm to innocent Yemeni civilians and the act was therefore justified because it saved life. There was also an implied criticism of UK government hypocrisy that earning money came before following principles. While I would need to think through my position on this particular aspect, the article reinforced my discomfort on selling arms to countries that rather than use these for legitimate defence did so in order to oppress the innocent.

As a Christian, I need to base my decision on whether or not to be a pacifist on what the Bible teaches. One text sometimes quoted is: “Then said Jesus unto him, Put up again thy sword into his place: for all they that take the sword shall perish with the sword” Matthew 26:52. But not long before that Jesus taught “Think not that I am come to send peace on earth: I came not to send peace, but a sword” Matthew 10:34. Paul taught “For he (rulers) is the minister of God to thee for good. But if thou do that which is evil, be afraid; for he beareth not the sword in vain: for he is the minister of God, a revenger to execute wrath upon him that doeth evil” Romans 13:4 and we are told “Let every soul be subject unto the higher powers. For there is no power but of God: the powers that be are ordained of God” Romans 13:1. My point is not to point score when it comes to theological debate but rather to say I am not yet decided and, moreover, any doctrine around pacifism falls more often than not in the less rather than more essential category.

Besides recognizing the question whether or not to take up arms to fight in a war may be a contentious subject, especially when that war is decidedly not fully justified, there is also the matter of whether and when we as individuals should take up arms, such as enshrined in the Second Amendment of the USA Constitution. While I am glad the issue mostly doesn’t arise in the UK and most people accept the law that prohibits gun ownership, I believe there is case for allowing people to bear arms, in order to protect one’s family or community, for if not me then who? One thing is sure though, armed conflict is to be avoided as far as is possible, and there is no glory to be gained when it comes to taking life, especially when it can be avoided.

As for “Thou shalt not kill”, this sixth commandment was to do with not murdering and sometimes there is a case for killing (there are many examples, especially in the Old Testament, when this was so). I quite get that for some, pacifism comes as a principled decision, especially when pacifists are prepared to face the consequences, and in times of war be ready to face danger e.g. by helping the wounded. But my conscience (and for this Christian, acting according to conscience is of paramount importance) is clear when I declare there is a compelling argument for non pacifism, in those cases when the reason  to be non pacifist is one that I can justify.

One thought on “Christian Pacifism”