According to Wikipedia: “Nando’s is an international casual dining restaurant chain originating in South Africa, with a Mozambican/Portuguese theme. Founded in 1987, Nando’s operates about 1,000 outlets in 30 countries. Nando’s specialises in grilled chicken dishes with various peri-peri marinades”. 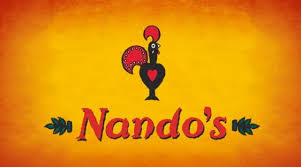 I have to confess that I hadn’t given Nando’s much thought until a week ago, despite becoming aware that it is one of the new eating places recently to have sprung up in my town, Southend. The reason for becoming more aware is that our son, recently returned from University, has in his first year away from home discovered its delights and advises me it is popular with his peers. In order to celebrate his coming home we agreed to check Nando’s out.

So me, Mrs B and Master B decided to eat out at Nando’s earlier today and go there for our Sunday lunch. We were not disappointed. Part of its offering was its special sauce ranging from extra hot to extra mild. I enjoyed my medium spicy half a chicken with mashed potatoes and unique peas sides, and the same went with my family and their choices. Food was delicious. Portions were adequate although to be picky I could have done with more mash. Refillable soft drinks and tea was good and so was its limited range of desserts if wanted. It should be said while chicken came in all sorts of dish variation and degrees of spicyness, all of which worked well, that, more or less, was all that was on offer. It was busy and buzzing and we had to wait a couple of minutes for a table to become available. The service was pleasant and efficient despite being busy – you order and pay at the till and the rest follows in good time. The value was ok, made good because of our NHS discount. The atmosphere was charming. Things like toilets were well up to scratch.

In my many years, I have seen how new eating experiences arise and then later get overtaken by something newer. But right now Nando’s is one of the new kids on the block that have grown quickly in popularity and coverage in recent years. I get why it is popular with my son’s student friends and I intend to come again.