Just like with Belfairs I have walked in Hockley wood many times previously although being that little bit further out not quite so often, although I go back just as long. I recall as a ten year old camping with the cubs there. It is tempting to do a comparison and it is true there is much in common. Both are woods with similar content and both are well managed and popular, with a fair number of visitors despite being early in the day (ok it was 8am). While there were less dog walkers in Hockley, there were cyclists and a fair number of joggers including a number of all ages doing an organized fun run. While both woods have their charms and the mystery of uncharted territory and links to adjoining common areas to explore, with Hockley the bluebells were outstanding, and there were snow drops too! I note these days you have to pay to park in Hockley wood (50p for two hours though isn’t bad and it is free weekends). Not planned for was the light drizzle that was to continue throughout my walk, yet without spoiling the eagerly anticipated experience of going back to my feeling free Robin Hood outlaw childhood roots. 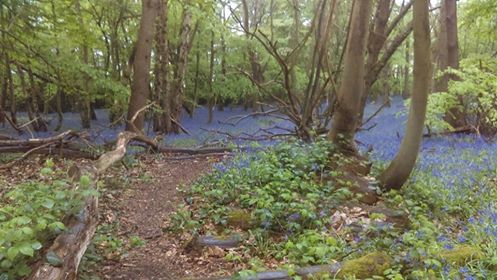 Feeling energetic and ambitious, although I have slowed down somewhat, I decided to do the longest of the three marked trails, the one which went round the outer boundaries of the wood. I vowed this time to keep to the trail throughout and nearly succeeded, except for the last bit I got confused and found myself landed prematurely on the main road and had to walk the last mile along busy traffic rather than tranquil nature. But all in all the two hours meandering and meditating amidst joyful nature (at least that is the message of the birds) was an invigorating experience, and if ever I needed a sit down there was generally either a basic bench available or some part of the remains of a tree that had been cut down. I have in mind my next child minding session, where by special request there are places I could lose my charges. All I need now is a dog to give me further incentive to visit Belfairs and Hockley woods.