A few days back a friend posted on his Facebook page: 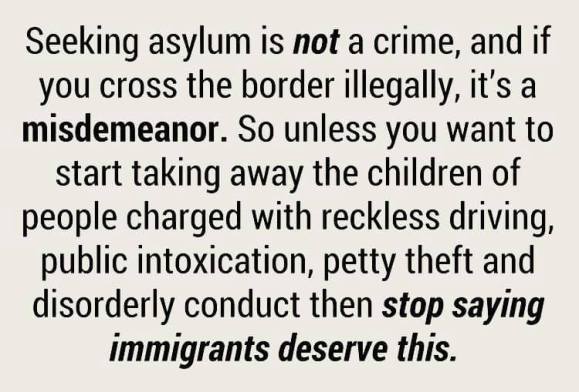 Foolishly, I waded in with the following comment: “I am going to be shot down for this but this reads to me as sanctimonious hogwash and of the politicising of Dems wanting to appeal to you luvvies by doing little that is meaningful in solving the crisis at the border. And no, no, no children should NOT be used as pawns in a ginormous political game”. A lively discussion took place including me being taken to task on expressing those opinions. I agreed rather than defend the indefensible I would seek out the truth as to what is actually going on, requiring that I do a lot more fact finding.

This is by way of a stake in the ground response before doing further investigation, but before I state my position on what I would argue is a crisis given the huge numbers seeking to enter the USA by its Southern border, where the resources to handle this crisis are stretched beyond breaking point, and why I stand by my belief that contrary to popular opinion the Trump administration are doing much that can be reasonably expected despite obstacles placed in their way by their Democrat opponents and a global conspiracy to undermine the notion of secure national borders, I felt I ought to say a bit about my own credentials to speak on this subject, which given the fact children are suffering raises all sorts of emotions irrespective of which side of the argument one happens to be.

I know a more about the situation in my own country (England) but then what we are seeing is a global immigration crisis brought about in part by the breakdown of civil society in those countries where people try to flee from and a globalist ideology that treats border security lightly and is rather dismissive of notions of national sovereignty and its way of life. What we are seeing in America is what is being seen the world over, with many different solutions attempted. When my community activist focus shifted away from mental health some 12 years ago it was toward homelessness and asylum seeking. Asylum seeking is a subset of immigration, which tends to be mostly economic, although the distinction can become blurred. These days, while maintaining my interest in immigration, especially asylum seeking, my focus is mainly on homelessness.

In my own town (Southend) there were many asylum seekers from countries like Zimbabwe and the way they were treated by government (and still are) was appalling. My work involved practically supporting such people and it continues. For example in the SHAN meeting I chair, the main item on the agenda at our next meeting is the problematic one of supporting those with “no recourse to public funds”, who are not allowed to work. In recent years we have seen a big influx of economic migrants and this has caused problems, and divided opinions, which I have discussed in my other writings, and is no doubt one reason many support Brexit.

Back to the matter in hand … we don’t know half the facts and because of the “enemy of the people” (large sections of mainstream media) what facts that do come our way tend to be distorted. Some MSM sources like Fox News may be more sympathetic e.g. “Hannity: System-wide meltdown at our southern border”, which provides a graphic description at what takes place and challenges the Democrat idea there is no crisis, and there is alternative media. That same friend posted a New York Times “hit piece” titled: “You Can’t Be Pro-Life and Against Immigrant Children” which had a go at conservative Christian groups who opposed abortion yet ignored what was happening to immigrant children. There is no doubt where this NYT opinion writer stands: “The crisis is the Trump administration’s practice of separating children from undocumented parents, even when the families”.

In his recent “Trump speaks to Faith & Freedom Coalition” speech, Trump outlined some of the issues that face his administration. While I support the idea of questioning what we are told, I think those wanting to criticise Trump should at least first listen to what he has to say. It seems to me that a fundamental point often missed in this whole debate is that the USA should control who it lets into the country and that means keeping out illegals who come with a whole set of problems: gang violence, communicable diseases, drug trafficking and child and sex trafficking. While one might sympathise with those wanting to enter the USA for a better life, most aren’t asylum seekers and many are being manipulated.

The law is such that once in the USA they can disappear and it becomes nigh impossible to track them, which makes the situation worse and dispersing illegal immigrants impractical. While separating children from parents is unsatisfactory, it is what has long happened when adults have been detained (although I agree regarding the above meme solutions need to be found). The imposing or threatening of sanctions on South American countries and specifically Mexico is having an effect. But the law needs to be changed and that requires bipartisan action. As for building the wall, while many find the idea objectionable, it will at least have the effect of keeping illegals out and reducing the number of heartbreaking stories of what happens when children are separated from parents, although from what I can make out children have been made into sacrificial pawns in a nasty game involving callous players.

So that is my two penneth stake in the ground. Of course illegal immigrants don’t deserve to be treated badly and certainly their children shouldn’t. I have no doubt the story will continue to run and I have more work to do. But I can also sympathize with one friend who argued “a country without borders that can be defended is not a country. The globalists weaponize the suffering of the poor, in order to break down national identity. They dont care about the poor, the use them to increase their grip on power. Moving people around in this way is NOT the answer. The NYT has been shilling for the globalists for quite a while now. It’s doing everything in its power to destroy this Presidency. The left could care less about the suffering of these people. They simply want to weaponize them for their own agenda. ie a borderless USA, where drug running and people trafficking can continue unrestricted”.

Even so, the gauntlet has been laid down and the challenge remains to get to the bottom of this whole mess and better understand what is happening, because from where I stand we the public are being fed misinformation, quite likely from all sides. While I do believe the Trump administration ARE being treated unfairly, the humanitarian crisis as their border CANNOT be ignored and neither can the concerns of the meme writer that kicked off this article.