One of the interesting distractions watching UK events unravel from the other side of the world is to observe how the election of the next leader of the Conservative Party is going. This morning, I wake up to the unsurprising news that it is down to a straight fight between Boris Johnson (the clear favourite given how voting has gone so far) and Jeremy Hunt (the c*** given the awful way he once handled the UK doctors dispute but then he stuck to the task and don’t forget what happened to Margaret Thatcher, milk snatcher). 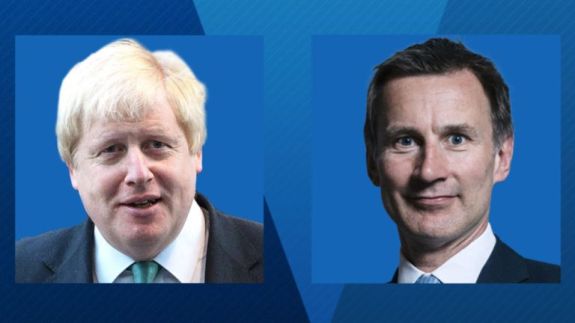 I am no fan if Mr Hunt, to be sure, although I have to admit he has shown some qualities as foreign secretary and has been surprisingly insightful dealing with the vexed issue of religious persecution. But I am not a particular fan of BoJo either, who reminds me when it comes to how I felt at the time, for more reasons than one, of his American look alike, Donald J Trump. But then again, just as the Donald has grown on me irrespective of multitudinous flaws, the same could happen with Boris. The fact that liberal luvvies across the UK really dislike Boris, and have been out in force reminding us what a bad dude he really is, is evident from the long distance away here. It is one reason maybe for supporting him but let’s face it the guy has history. I recall a year ago him raising a stink (which is nothing new of course) over Muslim women wearing burkas and a local artist friend painting a mural along our town sea front.

I was fore warned that the anti Boris brigade would be out in force before the leadership contest begun when two pillar of the church, Christian friends separately posted on their Facebook page an article titled “It’s time for Christians to speak out against Boris Johnson”. The article began “the amoral man most likely to be Britain’s future prime minister has no sense of humility or public duty. Churches should say so … The charge sheet against Boris Johnson is well rehearsed. He is a serial liar, philanderer and shirker”. It gets worse but you will get my drift. Some Christian friends intensely dislike Boris, but as the vicar author was at pains to point out, the Church of England is no longer the Conservative Party at prayer. Moreover, as I have discovered at my cost, even “sound” Christians don’t always sing from the same hymn sheet.

I have to confess that while mildly surprised how strong pro Boris sentiment is among Conservative MPs, and we will soon see if that is also the case among the party faithful, I am disappointed, wondering where were the good guys, that as the contest began eliminating the least popular candidates, we were left with a bunch, none of which I find myself as being particularly impressed with. But the same would be true with any of the other main parties, and even with the Brexit Party all ready to pounce should the new Conservative leader once again screw up Brexit, Nigel Farage is not my choice either. But as one true blue lady friend often reminds me, we are where we are. A decision is to be made, and not only the Conservative Party, but then we will all have to move on.

As a straight contest between Boris and Jeremy, I know where my vote would go, but then I am not a Conservative Party member and the best I can do is offer an opinion in the hope there will one or two who will listen. Boris with all his faults is my man. I suspect once in he may pleasantly surprise us. I suffer, as do we all, from not knowing enough about the candidates or the issues and not being able to rely on the “enemy of the people” to brief me sufficiently to help make up my mind. Even on Brexit, Boris has not exactly covered himself with glory. As I recall, on the third Teresa May deal vote, he had cold feet and voted for what still was a bad deal. But will he deliver Brexit? That I can’t say but I can say he is more likely to do so than Jeremy who as we know is no Leaver. As things stand we will be shot of the EU on 30th October, deal or no deal. But given that is an over my dead body scenario for most MPs we can’t take that as a given but can expect plenty of fireworks before then. One thing we can rely on though is here Boris will be in his element.

So there you go – my two penneth which will no doubt be added to that of many friends who choose to pontificate on these matters. Not a golden future outlook I admit, but as I often point out it is all about winning the end game. We are lucky enough still to be able offer a view without being taken down or taken out and when it comes to views that upset the apple cart. The first is about the matter in hand – the UK leaving the EU. As for the future of the Conservative Party, I am ambivalent but the thought of someone like Jeremy Corbyn and his misguided lieutenants ruling the roost does fill me with foreboding. But as I have preached here recently, God raises up leaders and puts down leaders. It is in Him we must trust.