Three days ago I posted an article titled: “Politics, Brexit and the US Supreme Court”. Brexit and Trump featured largely: Brexit regarding the latest proposals and the resignation of two cabinet ministers who thought Theresa May had sold Britain out and Trump, in proposing Brett Kavanaugh as his Supreme Court pick. Brexit and Trump feature in this article too but this time it is about Trump’s visit to the UK, now in full swing, alongside protests about him coming to the UK. I made my view clear in my “Welcome to England Mr. President” article. True to form, having (rightly) had a go at NATO members for NOT paying their way, he has now turned his attention to where Britain is going on Brexit. 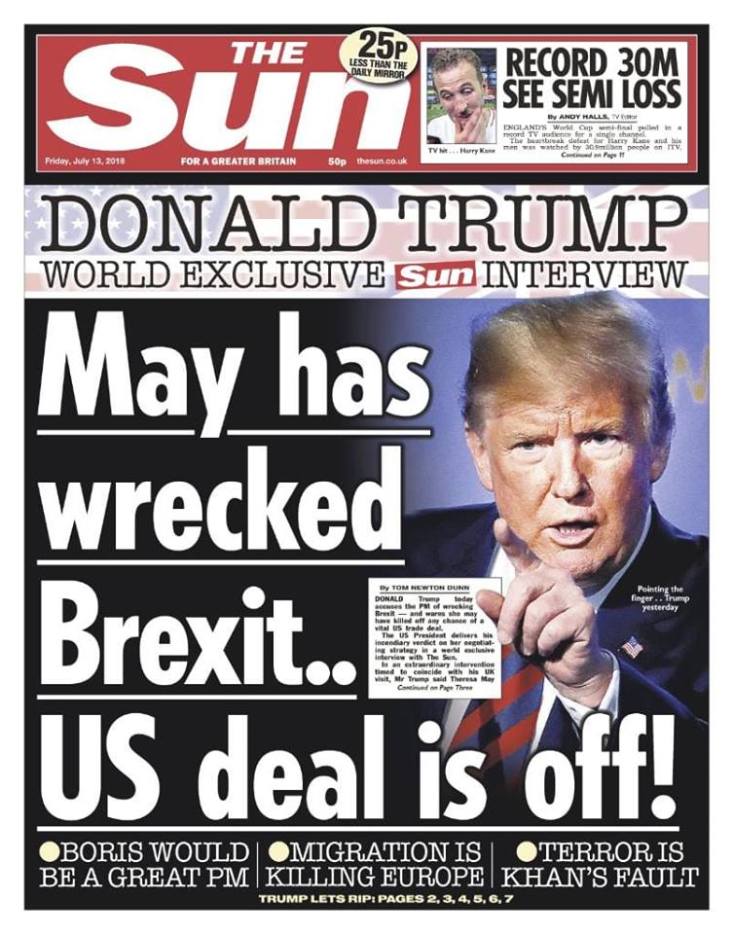 I should say that “the Sun” is NOT my favorite newspaper and is often not accurate. In today’s sensational front page, four statements were made, all of which, it can be argued, over stated the case.

The last three statements can be disputed and is not the main object of this article anyway, although I have some sympathy with the sentiments being expressed and while one wonders if Trump was right to make those points, I am reminded America elected a gladiator and NOT a Sunday School teacher, and his style is to shoot from the hip and respond in kind. Given the demonization of Boris by the liberal elite and the dearth of leadership in the UK to speak out concerning the untoward affects of migration and the disastrous policies of Khan, out of political correctness or fear of being accused of being called racist, I for one am glad Trump is doing so. Rather than make Trump feel unwelcome, as today’s protestors are trying to do, I would like to thank Trump.

But it is the first statement that I am more interested in for now. While “wrecked” may be too strong a word, by tying the UK in with the EU when it comes to Brexit and making it subject to EU rules, it has weakened Britain’s arm when it comes to negotiating deals with countries outside of the UK, in this case the USA. Trump is stating what appears to many “Leavers” to be the obvious and come to think of it anyone carefully following the Brexit negotiation saga, he is no doubt giving vent to his frustration and disappointment that the “great” trade deal that might have been struck cannot happen because Britain no longer can exercise full control of its trade related decisions. Whether I am right supporting Trump giving his opinions and putting pressure on the political process, when it is for the UK to decide, is a fair point. After all I criticized when Obama said Britain would go to the back of the queue when it comes to striking UK – US trade deals, if it were to leave the EU. I suppose my response would be on the lines that Trump sees the difficulties making deals with the US, with the present UK – EU trade deal on the table, whereas Obama (arguably) tried to bully the voters by making an unfair threat. I say to those who see Trump as the bully, while I am all for a “hard” Brexit, I would not be intimidated if I were to have to negotiate with the author of “Art of the Deal”. Deals work best when both sides get what they want!

I am not a great supporter of my local MP, James Duddridge, but I was heartened by his statement, pertinent to the above discussion, made today. “I was deeply disappointed at the Chequers plan and subsequent White Paper.  This is not the Brexit I campaigned for and my constituents supported.  I want an independent United Kingdom not the watered-down version of Brexit that these documents represent. The White Paper breaches the red lines.  It involves us paying vast sums to the EU, being a rule taker, side tracks parliament, fails to support our financial services and subjects us to continued interference of the European Court of Justice. As it stands I cannot support the government’s position”.

As I reflected in my earlier article, Britain is in a political, moral and spiritual mess. I see no way out other than national repentance and God having mercy on the nation. I recognize good people, including some who share many of my religious views, see things differently, which is why I should pontificate and irritate less and watch and pray more. Even so, I can’t help feel sad, angry even, seeing the passion of today’s anti-Trump demonstrators and wondering what it is they or I are missing. Given the present mess we are in regarding Brexit makes me wish he were British and spear heading Brexit negotiations. As I reflect, I for one am even gladder now that Trump has visited the UK and has spoken some much needed home truths, given the way things are, and due decorum aside I admire his stance.

One thought on “Brexit, Trump and Trump’s UK visit”