I have often argued that the subject of Israel is highly important when trying to understand what is going on in the Middle East in particular and the world in general. Even when Israel is out of the news, it is never far from it and this has been a reoccurring theme ever since I began to blog. It is my belief (based on how I view world events and the Bible) Israel will take centre stage as we contemplate end time events. Given we are about to celebrate the centenary of the Balfour Declaration, which was a significant step on the way to the formation of the modern state of Israel, in 1948, I thought it would be a good time to reflect on its highly significant and hugely contentious (for reasons I will explain) statement of intent. 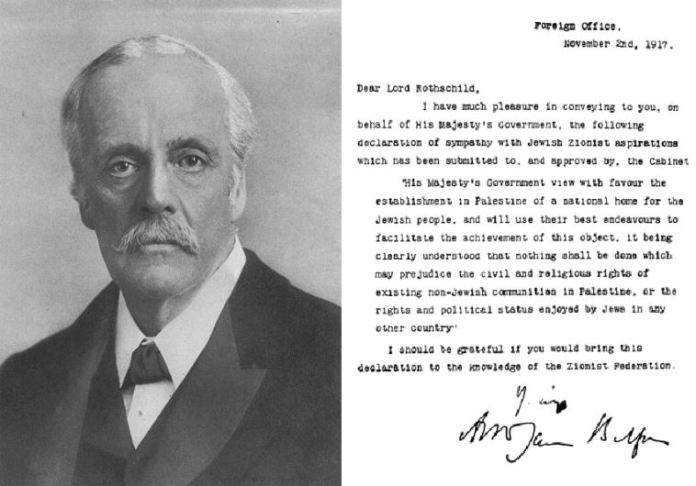 According to Wikipedia: “The Balfour Declaration was a public statement issued by the British government during World War I announcing support for the establishment of a “national home for the Jewish people” in Palestine, then an Ottoman region with a minority Jewish population“. It was in a form of a letter, sent to Lord Walter Rothschild, dated 2 November 1917.  It reads: “His Majesty’s government view with favour the establishment in Palestine of a national home for the Jewish people, and will use their best endeavours to facilitate the achievement of this object, it being clearly understood that nothing shall be done which may prejudice the civil and religious rights of existing non-Jewish communities in Palestine, or the rights and political status enjoyed by Jews in any other country”.

Israel is significant for many reasons. For many Christians, Israel (the land and the people) particularly matter to God because of the covenant He made with Abraham etc. and because it features in Bible prophecy regarding the “last days” in a big way. It is significant also because it is a key player to what is happening in the Middle East, it is a key ally of many Western powers especially the USA, it punches way above its weight when it comes to conflicts in the region. It is contentious because many of the world powers, especially most of its Middle East neighbours, are antagonistic, and some would want to see the State dismantled.

Before I give my view on Israel, something I have begun to address in my “Israel and the Middle East” e-book and before that in the “The Jewish enigma” chapter in my book “Theological Musings“, I need to come clean concerning my ignorance when it comes to giving a balance historical assessment of the Balfour declaration, in particular whether this is something to celebrate or something to castigate. I am grateful to two friends, who broadly represent the two camps, who have given the matter a lot of thought, who have in recent days shared articles (specifically those freely accessible online). While it is perhaps over-simplistic, I will call Friend A the anti-Zionist and Friend B the pro-Zionist. One definition of Zionism is this is “a movement for (originally) the re-establishment and (now) the development and protection of a Jewish nation in what is now Israel”. My understanding was that Balfour and some of his cabinet colleagues were Zionist sympathizers and were so based on religious grounds. While there are many real world complexity and political expediency considerations behind the formation of the State of Israel, many of Israel’s supporters have been / are Zionist sympathizers and those who don’t support tend not to subscribe to such views, although the waters have become muddied. I suspect individual government approaches to Israel are often governed by national self-interest and political expediency. Here I lay my colours to the mast. I am more pro than anti Zionist, this is as much to do with my religion, a belief that the Jewish people are specially chosen and a feeling of shame that in the name of my religion Jews have been persecuted down the centuries, yet recoil at the many Israeli injustices perpetrated over the past 100 years. While it might be claimed “we got there in the end” few would disagree the journey has been a torturous one, laden with errors of judgement.

Filmmaker hopes to spread awareness of Balfour legacy in Britain

The Balfour Declaration Is Another Colonial Distortion of History

Opinion The Balfour Declaration Promised Lebanon and Jordan to the Jews

How Zionism helped create the Kingdom of Saudi Arabia

Gallipoli: Evidence for the hand of God in history

The Balfour Declaration – Jews and Gentiles work Together

The Forgotten Truth about the Balfour

Rabbi Kook and The Balfour Declaration

What about Great Britain?

The Balfour Declaration: How a Letter Set in Motion End-Time Prophecies Concerning Israel

Reading the articles referred to in the above links is informative. Reflecting on the content remains work in progress. My own view is that the Balfour declaration was broadly right in what it set out to do despite many reservations. The main reservation concerns the implementation, and evil exploitation by Jews and Arabs alike, which we are still living with. One concern is Balfour addressed his letter to Lord Walter Rothschild, a leader of the British Jewish community. Perhaps I am prejudiced, but my take is the Rothchild family are key players pushing for the new world order, which I object to, and many Zionists are anti-God. It so happens they are able to ally with influential Christians, mainly from the Evangelical sector, which rejects (as do I) replacement theology. Perhaps the biggest objection is the injustices inflicted by the Israel state on the Palestinians living in its midst. While the Israeli hegemony may contest this, as one moderate commentator put it: “Balfour Declaration says: ”clearly understood that nothing shall be done which may prejudice the civil and religious rights of existing non-Jewish communities in Palestine,” It is here that Israel has not stood by this, but want to have all of the Land, and the Palestinians removed. They will not stop building more Settlements, stealing Palestinian land, and knocking down there homes, schools, and there businesses. Attacking their children, and putting them in prison with out even a trial.It is an Apartheid state. One law for the Jews, and another for the rest“. Equally, there have been wrongs inflicted against Israel (e.g. three wars, each one Israel won) by Arab nations, and bad, agenda fixated men leading the Palestinians who perpetrate terrorism, the Palestinian people made a pawn in a political power struggle, the hatred toward Israel by many of its neighbours, and the disproportionate hostility toward Israel by many of the movers and shakers in the West, who are quick to point out wrongs Israel does but ignore wrongs done to them.

Life is short and I doubt in my lifetime there will be a solution to the Israel enigma, given many great men have tried and failed to find one, other than the Israelis selling out in order to get peace, only to be double crossed. But my reading from the Bible is there will be a golden age for Israel, under their Messiah, Yeshua, who they once rejected. However, I have placed a stake in the ground (several in fact) and am open to honest debate, mindful those who do have an informed view tend to adopt polarized positions. I would like, for example, to bring together Friend A and Friend B to thrash out some of the concerns raised in the afore-mentioned articles. The God of the Bible is the God of Israel, but won’t tolerate, lies, injustice and unrighteousness. While I get it Israel is guilty but so is everyone else. I regret the amount of anti-Israel sentiment and the lukewarm response by the current British government to this centenary. I believe God has a special place in His heart for the Jewish people, many of who now live in relative peace, in Israel, thanks in part to Arthur Balfour. For this reason, I will be celebrating the centenary.

One thought on “The Balfour Declaration”