Given that the six hundredth anniversary of the start of the Protestant Reformation will be soon upon us, I recently decided to post on the man who is often seen as the key figure starting that reformation: “Martin Luther – the monk who shook the world”. While Luther may well be credited as the main man that caused it to happen, it should be borne in mind he was merely taking the torch that had been passed onto him by those who went before, preaching many of the elements of the message those before him presented. Two key figures are John Wycliffe – Medieval “protestant” and John Huss – Pre-Reformation Reformer. I am grateful to Pastor Roger Ninnis from my own church for bringing up these two characters in our church Bible studies, and this led me to dig deeper, including watching two eminently watchable films on each. Rather than write about their achievements, which can be found in the public domain, I refer to the first paragraph on articles on the two men, by “Christianity Today” (see here and here). 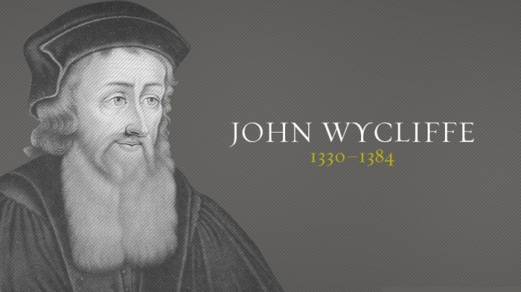 “Trust wholly in Christ; rely altogether on his sufferings; beware of seeking to be justified in any other way than by his righteousness.”

“John Wycliffe left quite an impression on the church: 43 years after his death, officials dug up his body, burned his remains, and threw the ashes into the river Swift. Still, they couldn’t get rid of him. Wycliffe’s teachings, though suppressed, continued to spread. As a later chronicler observed, “Thus the brook hath conveyed his ashes into Avon; Avon into Severn; Severn into the narrow seas; and they into the main ocean. And thus the ashes of Wycliffe are the emblem of his doctrine which now is dispersed the world over.”” 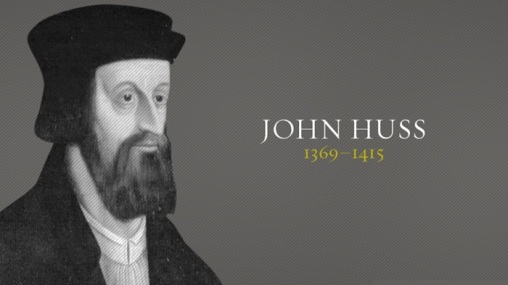 “Lord Jesus, it is for thee that I patiently endure this cruel death. I pray thee to have mercy on my enemies.”

“Early in his monastic career, Martin Luther, rummaging through the stacks of a library, happened upon a volume of sermons by John Huss, the Bohemian who had been condemned as a heretic. “I was overwhelmed with astonishment,” Luther later wrote. “I could not understand for what cause they had burnt so great a man, who explained the Scriptures with so much gravity and skill.””

Both men were ahead of their times, espousing views that were not widely articulated and deemed as heretical by the church, having come to a conviction concerning certain truths that many Protestants (and nowadays some Catholics) now take for granted, but for these men it was tantamount to signing their own death warrants since that is what happened to those the established church at the time decreed for those who did not toe the official line and deemed as threats. Wycliffe managed to escape that fate, although years after his death a vengeful church took up his bones and burned them, scattering the ashes. Huss was not so fortunate. Having decided he would not recant, he was burnt at the stake.

While these men operated in different times and countries, and where the Roman Catholic church dominated, they had a number of things in common. Both believed in the cornerstone doctrine of the Reformation: “Justification by faith”, the importance of having the scriptures available in the language of the common people, a belief that the scriptures be taught to all without requiring official sanction, and a willingness to defy ecclesiastical authority for the sake of conscience and speak out about corruption in the church, knowing full well this will attract powerful enemies intent to destroy them. Besides handing down the torch of the gospel of the Lord Jesus Christ, they played key parts in what might arguably be described as the most important happening since the birth of the Early Church, which still has enormous ramifications – which after further reflection I propose to articulate in a future blog.