Yesterday I visited the Growing Together Gardens in Fairfax Drive, Southend. There was a primary reason for the visit, which I will get to, but there was another reason too. The seeds for the project that gave rise to these gardens were sown around the turn of the millennium. I talk about it in my book “Outside the Camp”. It was also to do with my early forays into full time community activism. 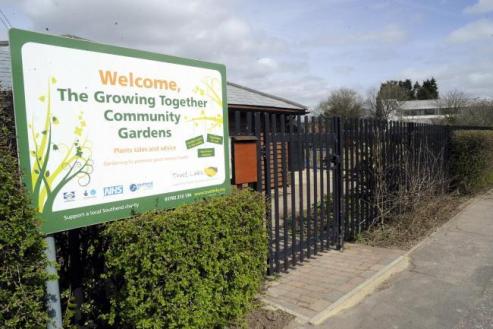 As I see it (although others might see it differently) is that it began by bringing together two different strands. The first was to do with a number of folk, primarily from among the churches, that were concerned at the number and size of gaps when it comes to service provision for those with mental health issues, and with it a desire for there to be a community response. The second was to do with the political agenda at the time, led by the Council, to give money to groups to do things that would benefit the community and those living in areas of social deprivation, under a regeneration remit.

The former group, eventually coming under the umbrella, Trust Links, saw an opportunity to partner with the local Council to set up a project, based around but not exclusively to do with therapeutic gardening, in partnership with that same council, in order to address some of the issues around the gaps in provision of mental health services. I was part of that group and later became the Growing Together project coordinator. One thing the project did was transform a piece of derelict land that was once allotments to become the community garden I visited yesterday, with those who had experienced mental ill health doing much of the work.

I left the project some eight years ago, but as I did the guided tour of what the garden had now become, it was in effect a journey down memory lane. People were still working in and around the garden, including groups of school children. There were many signs of what had taken place since the project begun to when I left, as well as significant, manifold developments in the eight preceding years. It was moving as I recall the blood, sweat and tears that went into it and faces from the past, involved then but now no longer here.

But the main point of my visit was to talk with one of the team that was attempting to interest the wider community, particularly ethnic minority, about the services it offered to carers. An overview of this and many of the other involvements of Trust Links can be found on its website, and it is great to see how the work has developed in leaps and bounds since I left. Supporting those caring for people with mental health issues (and for other reasons too) is a huge issue and something that had been a concern right from the outset.

It was an enjoyable visit and I even got to meet old friends. While some of the ideas we had in those early days, such as becoming a major horticultural player, including training and service provider, had not worked out quite as envisaged, it is clear that all sorts of new opportunities have been seized and that a significant difference is being made in the lives of some of the town’s more needy residents. My highlight was being shown a newt discovered in the garden by one of the pupils. I was happy to share in her delight.