I have to confess German politics is not my forte. Other than being aware that there are a number of parties each with a number of seats in the German Parliament and no overall majority, necessitating coalition government, I had little idea who  the parties were and what each stood for. The figure that stands out is the remarkable Angela Merkel and it turned out she was returned as Chancellor for a fourth time in yesterdays elections. 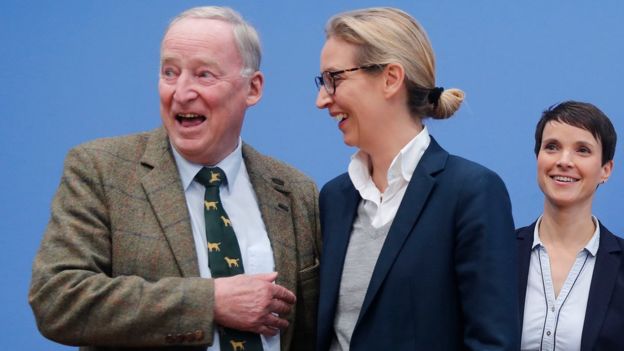 It struck me that what is happening in Germany is of particular significance, and far beyond Germany. Now, especially with the UK soon to leave the EU, Germany is the dominant partner, by virtue of its strong economy. Merkel may be seen as a contender for leader of the free world, especially by those who can’t stand the thought that it could be Trump. She is also seen by some as one of the bigger obstacles if the UK is to get a good Brexit deal. She champions a vision of European integration that is abhorrent to many euro-skeptics and has led the way to opening up Germany to large scale immigration, especially Middle East Muslims, which affects the rest of Europe. she has seen to it that Germany was the main contributor when it came to bailing out failing Southern Europe economies.

Despite being down in the vote share, Merkel’s CDU-CSU party gained more votes that the others, but there was no overall majority. The biggest upset was the big gains by the far right AfD party. One report titled: “German election: AfD vows to fight ‘invasion of foreigners‘” begins: “Germany’s right-wing, nationalist AfD party has vowed to fight “an invasion of foreigners” into the country, after winning its first parliamentary seats. “We want a different policy,” co-leader Alexander Gauland said following the historic surge. But splits have already emerged between AfD leaders on the party’s direction. Chancellor Angela Merkel has been re-elected for a fourth term but her conservative CDU/CSU bloc received its worst result in almost 70 years. Mrs Merkel is beginning negotiations to form a new coalition government. Her bloc’s current coalition partners, the Social Democrats (SPD), say they will go into opposition after historic losses”.

I was interested to follow an interview in Radio 4’s Today Program with a leader of the AfD party, of which I know little other that typifying a European move to the far right that we saw in the French elections recently. I thought the interviewee gave a good account of herself and the interviewer showed typical BBC bias, coupled with ignorance. She was pressed, for example on her views on Muslim immigration and mosques and minarets. Understandably, she felt there has been too much immigration overall and illegal immigrants should not be welcomed. She also made the point that most immigrants were economic rather than asylum seekers. Regarding Muslims she had no problem them worshipping in their own mosques but objected to the building of minarets because that was making a political statement. She emphasized the need for national sovereignty and a return of German cultural identity.

She agreed there would be troubled times ahead and I concur, and not just in Germany. I know too little about the AfD to come to a fully rounded view although the BBC interviewer was quick to make it out as a neo Nazi party and the interviewee was equally quick to deny such assertions [after posting, a friend pointed out some statements by one leader that can be construed Fascist, reminding me of the French NF under LePen – ed]. I couldn’t help thinking if I were German I might be inclined to vote for AfD as I observe with consternation many attacks on the country by Muslim extremists, the way this great country, albeit with a troubled past, has lost its way culturally and has been suppressing freedoms and allowing lawlessness, and my disdain of globalism, which Merkel champions.