“Last night our current President stood in front of 40,000 boys, and among other things: incited them to boo President Obama, who was a Scout, talked about how massive the crowd was, despite mandatory attendance, said the “who the Hell…”, talked about the fake news, cocktail parties and how hopeful he was to take away people’s healthcare, coerced individuals to vote in his favor and threatened those who have stood against the GOP bill, talked about Hillary Clinton, and bringing back “Marry Christmas”.” 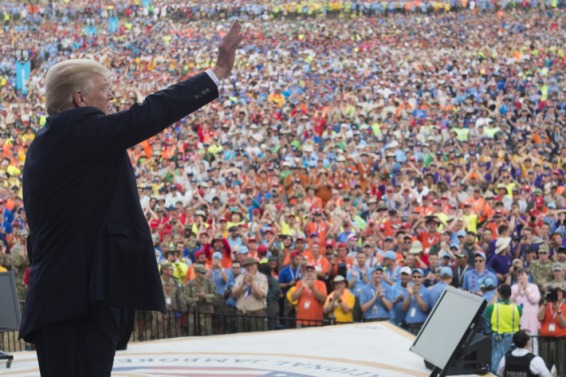 President Trump’s speech to the boy scouts, at their jamboree, has been well reported and the above is one of the critical assessments of that speech. I fact doing a Google search came up with two pages and all the reports were more negative than positive. When I posted about the speech on my Facebook page all those who commented were critical. Comments ranged from likening Trump’s speech to the scouts to that of Hitler brain washing the German youth to it being a form of child abuse given the speech’s political nature.

I decided I would listen to the whole speech (see here) and then try to reach a balanced view. But before I do that here is something about the Scout movement, which has played an important part in the lives of many. I was a scout for a short time when I was 11 (I left because I lost interest due to bad leadership) but before that I was a cub and stayed a cub from the time I could join to when I had to leave to go to scouts. I gained merit badges and promotions and nearly all my memories are positive. I have no doubt my cub pack was part of an excellent movement and it played a positive part in my life. In adult life I got involved helping with Boys Brigade which could be seen as friendly rivals to Boy Scouts, and while uniformed organizations are not for every boy, many who did join benefited immensely. It was good to be reminded of the Scout Law: “A Scout is to be trusted, is loyal, is friendly and considerate, belongs to the world-wide family of Scouts, has courage in all difficulties, makes good use of time and is careful of possessions and property, has self-respect and respect for others”. While there is a religious aspect (or there was in my day), which I see as somewhat watered down in the main, the scouting movement is strictly non political.

So back to Trump’s speech: some of it was very good and (sadly) I have to concur some of it was very bad. It was good Trump made an effort to attend in his busy schedule and that was in part at least was because of his belief of the character building aspects of the scout movement and that the movement can play an important part in raising the next generation of leaders. He made reference to several members of his administration who had been boy scouts. While this was not the time to mention it, “fake news” were unlikely to make mention of the 40,000 crowd that were overwhelmingly supporting Trump and enthusiastic. I also thought a lot of what he said was appropriate and if anything reinforced the entire scout law. I liked the way he drew upon his own experiences to encourage the boys to make the most of their lives. He rightly praised the dedication of those who help run scout groups as well as the boys themselves.

But there was a downside. Sadly, it was not just the odd indiscretion we have come to expect from this President, but there were many. He did have a pop at Obama; he did discuss his intentions regarding “the swamp”; he did use the opportunity to criticize mainstream news media unsympathetic toward him; and he even had a go persuading his audience of the rightness of his legislative program. Many were children who were obliged to attend.  While I have no problem encouraging children to think through the issues of the day and to be community minded, no way can I endorse his personal politicking at an event meant to be not about him and non political.

Trump achieved a lot of good taking part in this jamboree. It is a pity that he was not in the main given credit for this. But he also did harm and displayed a serious character flaw, which is to make what he says about him when “him” should have no part to play. I am no apologist for Trump as I keep saying, and I do not defend the indefensible. Politicking at a scout jamboree is indefensible!