I had an amusing experience yesterday as I trawled down the various posts on my Facebook page. There was one lady, who I will call my luvvie, liberal friend, who posted something, followed, I would presume unconnected, by another lady, who I will call my rabid, righty friend, who posted something similar. Both were quite angry with the state of the world and how people approach things, as many seem to be these days, who both defiantly declared that they would speak as they find and say what needs to be said, and if any of their Facebook friends don’t like it they know what they can do. Besides smiling because I can be “friends” still with these two poles apart “angry” ladies, my mind turned to a favourite scripture.

Since I become active on Facebook as well as regular blogging a little over three years ago, I have become aware of many with strongly held and opposing views of the world and when people express these eruptions frequently occur, and this escalated post Brexit and did so further when Trump won the US election. As someone with strongly held views, which seem to be in a minority although I am finding a significantly sized one, and who is prepared to put my head above the parapet, I find myself attacked for doing so. This makes me wonder: should I maintain my own counsel or should I share it? As I write, I came across a friends Facebook post critical of President Trump attacking London Mayor Khan in his approach to the aftermath of the London Terror attacks and decided to weigh in with my alternative perspective. I have strongly held views on the matter (see here) but is it a time to keep silent or is it a time to speak? Someone close to me has suggested it should be the former. 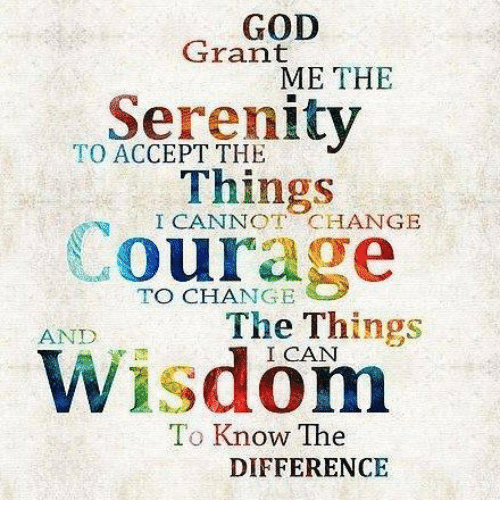 I realize I am prone to frustration when good people fail to get important and what is obvious to me points, but do I or don’t I say something (my wise counselor suggested do it gently once and after to refrain). Sometimes it is back to the “Serenity Prayer” with wisdom being the key ingredient. As I often remind myself, it is about winning the end game and if speaking my mind makes that goal less likely it could be a time to rethink. Yet too often I see people speaking on the very issues I care about and offering similar views to me and getting castigated for doing so. Given they have more to lose than me there seems to me to be a case for joining them in solidarity. And then there is the next generation that need to carry the torch when in a few years I have parted from this world. I owe it to them to speak sense into what matters and thus empower them. Besides, how can we be silent, if it is change we want / need?

There are many other scriptures that come to mind on the matter and I will resist the temptation to make this into a full blown out sermon. For those who think I should shut up, can I remind them of the lessons of history? Is that precisely what good people did in Germany as Hitler came to power, until there came a point when speaking out became a death sentence? Of course we need to be peace makers; our words need to be seasoned with salt and we need wisdom in knowing what to say, when and where and of course we need to operate the “true, necessary and kind” principle first.

Addendum: One of the problems of getting old is one can be prone to repeating oneself and not always realise one is doing it. I wrote on this very subject two years ago (see here) and some of the points I make now, I made then and others beside. I discovered this once I had posted this time around and was told I had already done so. I suppose, if I can take something from this experience, it is a subject that has long exercised me and I am still learning the lesson.