In my earlier blog, I wrote about the two hustings events being planned for the Southend West and East constituencies, to take place yesterday. In the light of the London terror attacks the day before, the organizers of the Southend West hustings decided to cancel. After a good deal of soul searching and consultation, the organizers of the Southend East hustings (renamed to “meet the candidates” as the person defending his seat decided not to attend, claiming prior engagements despite being offered alternative dates) decided that the event would take place, and much to everyone’s relief it went off well and was fairly well attended. 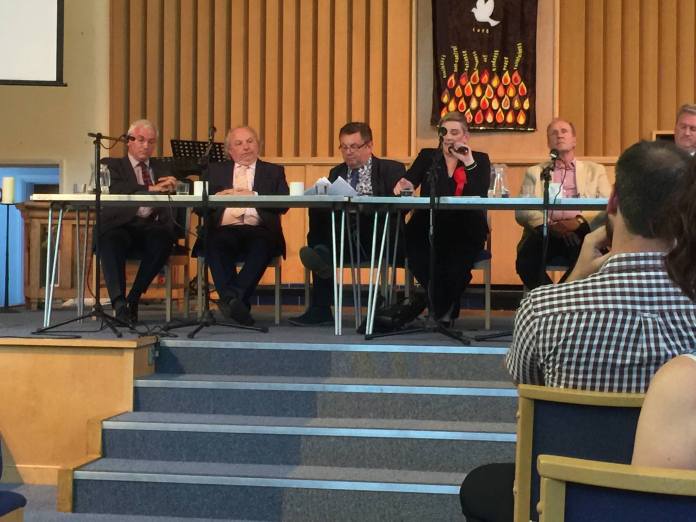 I along with others in attending listened with interest to what the five remaining candidates had to say: Simon Cross (Green) Ashley Dalton (Labour), Peter Gwizdala (LibDem), Neil Hookway (UKIP), Ron Woodley (Independent) (although I came in late because of a prior engagement). In terms of performance, (imho) Ashley Dalton did best (except for the Brexit question) followed by Simon Cross, Ron Woodley and Peter Gwizdala (probably in that order) with Neil Hookway putting in an overall unconvincing performance, although he did best answering the Brexit question (but I am a bit biased). I felt Ashley and Simon were most clued up and this was evident answering questions on homelessness. I felt Ron’s passion for Southend shone through and I keep my good impression of Peter I gained from two years ago. I felt Neil’s reasons for standing were honourable given other parties fail to address his concerns and those who support him. I gave Ashley the champagne moment award for declaring her Private Members Bill would be about having a fair system when making exceptions to pay for those on prescribed medicines. While more grandiose ideas like a fair voting system (something the Greens and UKIP were keen on) have their attractions, I felt Ashley had thought through her ideas and I could well see her being able to implement these if given the chance.

I was disappointed questions tended on the tame side insofar most of the candidates agreed on most of the answers, making it that more difficult to distinguish their relative qualities, and that some of the questions where I expect there to be a difference that I would have liked to have been ask, such as how to combat Islamic terrorism, weren’t. The issue of the day, as far as many Southend voters are concerned, the future of the town’s hospital, was one in which the candidates were pretty much agreed, and it was a pity the local MP was not present to put forward the government case and stimulate a more lively debate. Concerning which, the absence of James Duddridge was picked up on and criticized, more than once, by other candidates. I could not help but sympathize – his apparent contempt for the electorate he seeks to represent is to me the final nail in the coffin when it comes to my NOT voting for him Thursday.

I thought the meeting was well chaired insofar it flowed well and the candidates were made to feel at ease. Given some lively audience members, with Labour and Green contingents being the largest and more vociferous, he did well to maintain control. However, by opening up questions to the floor was in my view a mistake – we had come to hear what the candidates had to say – not the opinions of members of the audience. Also, there was no strict time keeping – I would have much preferred candidates to be given a fixed time to answer the question and when the time is up it is also the time for them to shut up. Some candidates failed to answer the question, making it even more irksome. We could have had more questions, including some of my taxing and more controversial ones, if that had happened – imho. The other disappointment was there was little media coverage other than social media and I wonder how many more would have come if they had known the event was on. But all in all, it was a worthwhile event, two hours well spent.

As to whether it changed my mind regarding my voting intentions, the answer is no and if anything reinforced them, which I will come to in my next (pre-election) blog. My anecdotal feedback and from reading various social media is most of those attending thought it was a worthwhile event. Despite a healthy turn out by modern hustings standards, I wish a lot more would engage in this way, for what better way is there to weigh up each of the candidates? I was glad I got involved in putting on this event and felt heartened that irrespective of views all the candidates want to serve my town.