One of the catch phrases etched on many people’s minds in the recent Donald Trump, US Presidential campaign is “Drain the Swamp”. It resonated with many, including this blogger, because there was a feeling there was a swamp to be drained and Trump’s main rival, Hillary Clinton, was part of and beholden to that very swamp that needed to be drained. To what extent he has been successful is still to be fully worked out as is what extent it is even possible, as many before him who promised similarly have found.

As is generally recognised, President Trump divides opinions as few others do or have done. I have gone on record as being supportive of Trump’s presidency in a way I wasn’t with his predecessors. While it was the prospect of draining the swamp that attracted me to Trump, some of my friends take an opposite view and argue that Trump has merely added to the swamp with his own version of corruption. As for Trump draining the swamp, I have given examples in my earlier blogs. Much of the good does not get reported in anti-Trump agenda led mainstream media reporting, which I have come to distrust and why I have made “The Drudge Report” my “home page” when accessing the Internet, to alert me as to things going on in the world I might otherwise miss. When I read, for example, another report of high level pedophile rings (see here) and read of instances of it being dealing with under the Trump administration (see here), I see this as a small but significant example of Trump delivering on his promise. But lately, I have been concerned and feel Trump may have been “got at” and controlled by elements of the swamp he has sworn to drain, giving examples in recent blogs (see here). 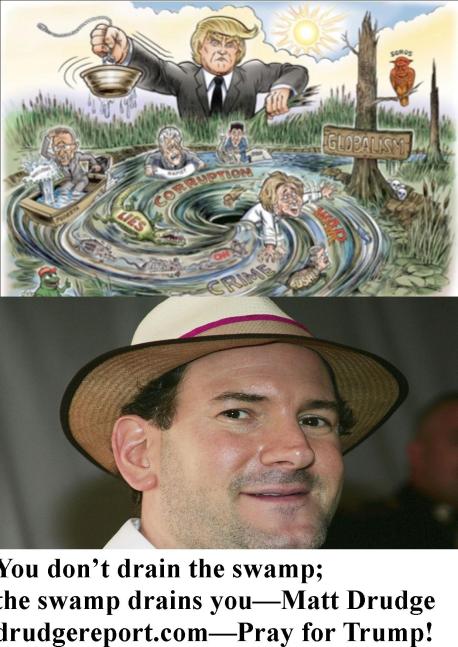 Just as I am skeptical when it comes mainstream media, I am also skeptical when it comes to politicians, despite having met a number over the years and feeling in the main most started off well intentioned, regardless as to whether I agreed with their views, but other factors come into it when they get power. What I suspect is that when politicians come up against the real power bases that control what happens they become corrupted. That is what came into my mind concerning Donald Trump, along with predecessors, when I came across a Matt Drudge quote: “You don’t drain the swamp; the swamp drains you”. Drudge is dismissed by some as yet another conspiracy theorist, and while I seek not to be taken in by fake news, my experience along with that of many is the news he reports (often citing mainstream sources) is anything but fake. The unwelcome power of the military industrial complex Eisenhower warned against, Schumer’s warning: “Intel officials ‘have six ways from Sunday at getting back at you‘” and reports by some labeled as conspiracy theorists of a powerful elite driven, vested interest, malevolent, corrupt, hidden hand, globalist “New World Order”, and a Deep State that really controls things, raises many alarm bells.

My simple Christian upbringing leads me to believe “righteousness exalts a nation, but sin is a reproach to any people”. My own observation, this as a result of increased watching over recent months, is there is a lot of unrighteous taking place, including momentous bad happenings often initiated from behind closed doors, we should be alerted to. Once alerted, and notwithstanding safety considerations, we need to combat. My point is not necessary to exalt or denounce any one person, recognizing the good and bad in all, particularly someone like Trump. But I am concerned when I see someone, like others before him, who having set off on a noble path, like draining the swamp, later finding the swamp draining them. What really is needed is a nation that is prepared to repent in sackcloth and ashes and here I realize my main duty as a prayer and a preacher. In the meantime, I will continue to watch and warn and pray with millions across the world, who daily pray “Thy Kingdom come”. I also intend to do what the Bible exhorts us to do: “that supplications, prayers, intercessions, and giving of thanks be made for all men, for kings and all who are in authority, that we may lead a quiet and peaceable life in all godliness and reverence”. We live in interesting times and when there is a swamp to be drained.