Ask me a year ago if I expected to spend so much time scanning the news and putting myself up as some sort of pundit (albeit a reluctant one) I would have said definitely no. While there is a plethora of nitty gritty, here and now, stuff that I do need to attend to (and some might say I should focus on), such has been the momentous and rapidly moving events in the past year, especially with the reversal of the trend to globalism, I have felt constrained to take on the role of a watchman, for if not me then who? 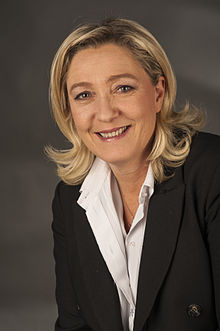 While some have me down as Nigel Farage and Donald Trump apologists, if that is the case, it is a role I take on reluctantly and I do not support all they say and do by a long way, and yet given the hostility vented toward both men, often unfairly, by people who I reckon have been duped by a hostile media and the trickery of an unholy conglomerate that make up the establishment, I often find myself speaking up for them. One of the main things both men have in common is they are anti-globalists and while I try to steer clear of conspiracy theories, I suspect one the main reasons they are reviled is they are seen as a threat by the very people set to benefit from globalism. Add to the mix Marine Le Pen, the France Presidential candidate, who if elected would be another blow to globalist aspirations. I know too little about Le Pen to comment authoritatively but recognise the concerns people have against her purported racism and Islamophobia. Given the polls and what we have seen recently, she is a real Presidential contender. Not surprisingly there is much opposition, some say paid for by the arch globalist himself, George Sorros, including moves to indite her for allegedly stirring up hatred against French Muslims.

I wish to add to the mix another significant figure, some say the power behind Trump’s throne, Steve Bannon. A recent edition of Time magazine edition had him on the front cover, with the caption: “The Great Manipulator”. While the opening sentences of the piece on Bannon seemed to carry an anti bias, what was written was mainly fair and it is fair to say however much Trump would claim to be his own man, Bannon may well be the main power behind the throne. Like many of Trump’s picks, I have still to come to a fully rounded view, and despite being warned off early on that he was a white supremacist and an Islamophobe among other not pleasant things, there is much I have heard him say I agree with.

What prompted this somewhat convoluted post was yesterday’s Press Conference by President Trump. Just before checking this out I read a piece in the Huffington Post that poured scorn over Trump’s performance, later to be borne out by other media reports and opinions offered by friends. Huffington Post is one example of alternative media I often refer to and provides an anecdote to Info Wars when providing a view of what is going on. Actually, when I checked out the Press Conference later, I decided to award Trump low marks for style but high marks for content – it seemed to me that I was watching a gladiator sparring in the ring against lions and I felt he put on a good performance (but that is for another post).

But back to Bannon, another Huffington Post piece to come my way had the title: “I Told Steve Bannon: ‘We Are Not At War With Islam.’ He Disagreed”. Under was a caption relating to the author: “I was the target of Islamist ire for publishing cartoons of the Prophet Muhammad in a Danish newspaper. But a war against all Muslims is not the solution”. He then went on to recount a discussion he had with an impassioned Bannon regarding how to deal with the supposed threat of Islam. As far as Bannon was concerned, what we are now seeing, concerning the islamification, together with the secularization of the culture, replacing the once generally held Christian consensus, might lead to armed conflict.

I have blogged about Islam and Muslims on a number of previous occasions and have proudly made mention that I have many Muslim friends and have been trying to befriend Muslims and understand Islam from an early age. While the existing powers that be have preferred to go along with the Islam is a religion of peace narrative and some of the acts of terrorism we are seeing is by a tiny minority of extremists, I am less convinced, despite having a high regard for most of the Muslims I know. While the holy wars where Islam has expanded its influence by force, with this being countered by things like the Crusades, may appear to be things of the past, I am less convinced we won’t see a conflict and already there are signs of anti-Muslim backlash (sometimes because of prejudice and sometimes as a reaction against bad things seen) and ongoing jihad that makes me think otherwise. I fear we have fudge the whole Islam business. I write to serve notice that if we ignore the threats that the likes of Bannon see so clearly in their opinion, we do so at our peril.

I have deliberately tried not to be controversial in this blog, although I daresay I have raised contentious matters I need to return to, but rather I have sown seeds for folk to consider as we see events unraveling in the days to come, where the likes of Bannon and Le Pen, with Trump and what Farage unleashed – Brexit do play a part.