Often around the end of the year, various pundits reflect on events that have taken place in the year just past and look forward to what might happen in the year to come. In 2016, there have been many noteworthy events, particularly some of the more distressing ones unfolding in the wider world (and a lot more to come in 2017), but I would like for now to reflect on three, all in the area of politics, where I have had some involvement, at least as a blog writer. 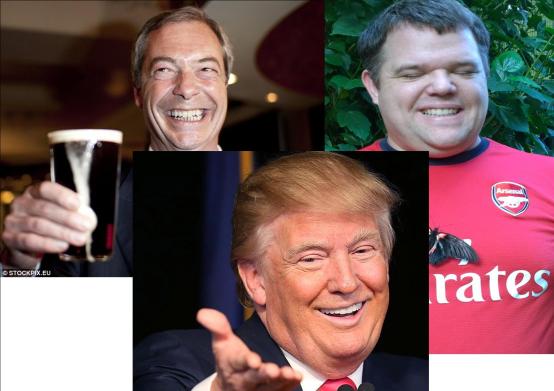 What have Del, Nigel and Donald all got in common?

My political journey last year kicked off just before the May elections. These weren’t the biggies compared for example with the General Elections, but as far as my own locality was concerned, the Borough of Southend on Sea, it was pretty significant. For one thing, the result could affect the balance of power as to who controlled the Council and regarding my own ward, I felt it was my civic duty to pay attention to what was going on, and so I organized a hustings. Interestingly, of those taking part, Independent, Conservative, Labour and UKIP, I had in the past voted for all those “parties”. The only one I hadn’t voted for was Green and so I dealt with that deficiency this time, not just because I wanted to encourage the eager young not expected to win candidate by pushing him over the 100 votes mark (which happened) but I liked his approach to one local issue – opposing further development on greenbelt land and regenerating the town centre instead. As it happened, the sitting Independent guy won and I was happy as he has been a goodish councilor. I was sorry for my Labour and Conservative friends, who worked hard and would have made good councilors had they got in. I even helped Del, the Conservative guy, deliver some of his leaflets and was one of his tellers on the day, later enjoying the show when the count took place. Interesting both scored around the same as the UKIP guy, vote wise, who I felt was a good chap but uninspiring and without a feel for local issues. It seemed what was on the minds of many of those who did vote for him was the forthcoming EU referendum. It turned out the Conservatives by some dubious dealings were able to overthrow the Rainbow administration.

Regarding the EU Referendum, it was an issue I was particularly interested in. What was a bit different was that the campaigning was not on political lines and while it seemed Left = Remain and Right = Leave, it was also a gamble by the Right leadership (David Cameron) in the light of so much party and electorate discontent (who did all they could to get people to vote Remain, unsuccessfully it turned out) to hold a referendum, and the number of working class Leave voters. One of the quirks of the whole affair was the strange mix of bed fellows heading up the In and Out campaigns respectively, and Mr Brexit himself (Nigel Farage) being largely ostracized by both sides. As a lifelong Euroskeptic, I might have been expected to vote OUT. But I felt beholden to check out the issues, sadly clouded in fear and half truths, and ask the question: even if the EU had a lot to be desired, whether or not we would be better off if we remained in rather than left? In the end I came down on Leave and argued my case via my blogs and on Facebook etc., sadly falling out with a number of folk who felt that to be a terrible decision. This issue stimulated passions as few others have and both sides felt they were right. Like most I was surprised that we voted to leave the EU, but pleased we did even if with some trepidation. Like many, it was with consternation I saw the wriggling out tactics of those who didn’t get the verdict they wanted and the slow pace of progress and lack of leadership negotiating Brexit deals when the outcome was known, and on the other side overt racism by some fired up by the result.

Which brings me to Brexit Mark 2: the US Presidential Elections. I have found myself in more recent years taking a particular interest in these and especially this time round with two poles apart, not particularly suitable in my view – at least to start off with, contending for the top job. What makes US Politics interesting, at least for me, is that while there are issues that the US has in common with the UK (the outcome of this and Brexit showing shared concerns) is the differing approaches. Choosing the candidates for one thing, and when it comes to appointing the next member of the US Supreme Court the UK has nothing remotely similar issue wise. Like many, I was earlier of the view that Trump was the least suitable candidate among his fellow Republicans – because he was crass. As for the Democrats I rather warmed to Bernie Sanders, despite his more radical leaning politics, and was disappointed though not surprised that “crooked” Hillary won the nomination. Come Election Day, I was neither surprised (partly because of Brexit) that Trump won and actually was pleased because he was in my view the best of the available choices. While he has yet to take office, he has already done things which are a taste of things to come when he does take office, and while I do not agree with a number of things, there are a number of things I do happen to agree with. I fully expect him to shake things up, I think for the better (that’s if he does get to take over on January 20th, and that is a big IF, given some of the recent Obama led happenings: Israel UN vote, Russian expulsion, executive media gagging order, etc.).

It begs the question what can we expect in 2017? On my more parochial Southend-on-Sea front, while I am ambivalent concerning the current administration, and concerned there seems no end to austerity (recent announcements of a yet again reduced budget confirm this), I love my town and believe we can work together for the greater good. As for Brexit, while disappointed things haven’t moved faster, I see a better future for the UK being out of the UK than in it. As for the USA, I see more hope in Trump than might have been the case if Clinton had won. What is for sure is political outcomes are no longer things we can take for granted any more, as at least 2 out of the 3 afore-mentioned events show. While some will despair at the calibre of the electorate, I despair at the patronising arrogance of those who think they know better and sympathise with the “little people” who might thrive if they are empowered. No-one should deny those who voted, some for the first time thinking they could change things, have genuine concerns over security, jobs, freedom, etc. and must not be dismissed. Neither should we dismiss the concerns of those who want a fair, equal and inclusive society.

The answer to the question posed above, is Del (local elections), Nigel (EU Referendum) and Donald (US Presidential election) all played a big part in my eventful 2016 political year. Happy New Year guys? As for friends (many I suspect) who disagree with my analysis, I hope we can still be friends and work together for the greater good. And might I add, we are living in dangerous times and humanly speaking we are up against it. We do well not to put our confidence in fallible politicians but rather in the one infallible Almighty God!