A word that often crops up in my among other things – observing the political scene is “progressive”. It is often used such that hearers are assumed to know what this means, although like any term, it is wise in my experience to define the term first before using it, to avoid future misunderstanding. Another observation is that depending on one’s outlook (political, religious etc.) progressive may be seen as a good thing or bad. But firstly, here is my understanding of the term’s meaning, as well as one of its antonyms: “traditional”. 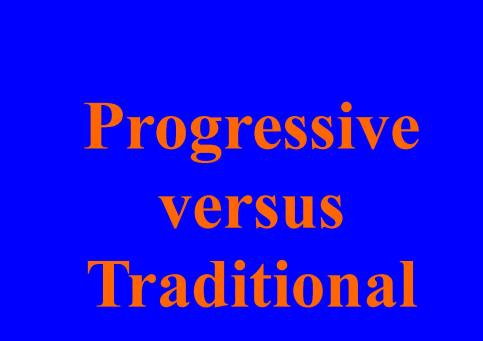 Progressive: favoring or advocating progress, change, improvement, or reform, as opposed to wishing to maintain things as they are, especially in political matters

Traditional: following or belonging to the customs or ways of behaving that have continued in a group of people or society for a long time without changing

Progressive is a term one might associate with those whose political and religious position veers toward liberal, and traditional are the sort of views one might expect conservatives to hold. These terms can have strong emotional overtones. After all, what is wrong with progress and improvement? If we look around us, we have to conclude that change and reform is often needed. Some of my more conservative friends see progressive as a euphemism for secular atheism and ungodliness, leading to the opposite of what is intended. Why change things that work or introduce reforms that give rise to unintended consequences? As for traditional, while that can go down well in some circles who harp back to a golden past or take a more literal view on texts like the Bible and the US Constitution (pertinent because of recent events), and wish those values had carried forward to the present, detractors may well point out those who hold such views are often obstacles to tackling things like racism, sexism and homophobia and when things need improving, changing etc. they aren’t and society is then worse off, and all to often we maintain the status quo because we fear change.

I should nail my colours to the mast though, although regular readers will not be surprised when I say what I am about to say… whenever in the past there have been issues raised where one has to decide between taking a progressive or a traditional view, I have more often than not come down on the side of traditional, except on matters of social justice where I tend to favour progressive. I like to think my views are NOT because I am prejudiced or blinkered but rather I try to decide based on what I believe is true and right. I also have to recognize that good people often see things differently to me, and while I feel I should argue my point and act accordingly, I also need to respect the other side. It can well be one or the other. When we go through the list of issues we need to decide upon, the answer might be one based on either a progressive or a traditional approach – depending … What is needed is wisdom to decide which. For me, I try to apply my beliefs based on my faith when doing so.