In the lead up to next month’s US presidential election, I receive news sources and comment from many sources, offering many angles and perspectives – a good thing as it not only informs me of what is happening but it also helps me to come to a view. One of my Facebook feeds is from Franklin Graham, son of the famous evangelist, Billy Graham. I find reading what he has to say often stirs me and makes me think, even if I do not always entirely agree. 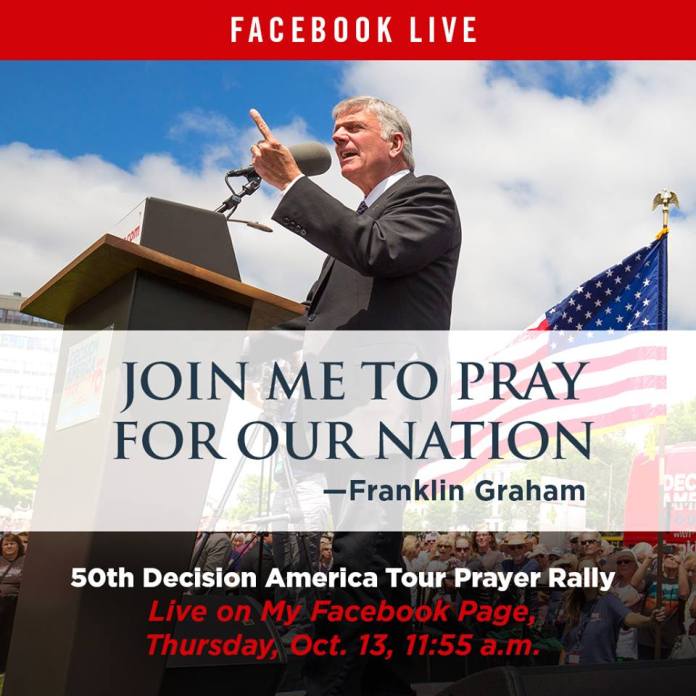 A few weeks ago I wrote a blog, which in part compared Franklin with his father (see here). As I revisited it, I wondered if I was too hard on Franklin when making that comparison, recognizing it is not entirely fair to do so, especially given his father is a living legend. One of my concerns is that he appears too much aligned to the Christian right and does not give enough acknowledgement to the concerns of the Christian left, even though he purports to be neutral regarding belonging to Christian “camps” and supporting political parties, and he has tried to make it abundantly clear he is NOT endorsing any of the presidential candidates.

Yesterday on Facebook there was a live feed from his Decision America rally, being held in Rayleigh, North Carolina, and I was able to follow part of it and later catch up on what went on, on You Tube (see here). As some will know, since January, Franklin has been touring the state capital of EVERY state in the USA (all 50 of them) (check out here for background info) and yesterday he visited the last of the fifty state capitals. From what I can make out, the format of the rallies are similar and so is the message preached.

The emphasis of the rallies was on prayer, especially for America and in the light of the November presidential elections, and while non prayer activities, like Franklin speaking, seemed to dominate proceedings, there were several opportunities to pray. The rallies were all well attended, far more than what was expected at the outset. His message included a simple gospel presentation (similar to what his father in days gone by would have given), statements to the effect that America was in a mess, politically, morally and spiritually. He cited secular humanism, which has permeated American culture following the fall of Communism, as the main threat and that it has now infiltrated every nook and cranny of American society (although this is an opinion that many Christians do not share), but it can be withstood and will be if the people were to respond to the threat. He argued that, above all, what America needed at this time was to return to its Christian roots.

He affirmed, as has a number of Evangelicals, that the composition of the US Supreme Court is the biggest issue in the presidential election. He recognized no party, Democrat or Republican, could save the country, for only God can and will do so if his people will turn to him. He urged his listeners to vote, and even stand for office, not just in the presidential election but for other offices up for grabs, right down to school governors and mayors, based on a prayerful consideration of the facts in the light of Christian values, pointing out the result of Christians not voting (and he gave examples) could and has led to unsuitable candidates being voted in, who have proved to be disasters. He recognized the inevitable opposition of progressives (atheists) but suggested a robust, thick skinned, winsome approach was needed and like minded people of all flavours of Christian views ought to come together. He recognized the role of community organizers (and surprisingly even cited President Obama as an example) and the need for the role to be fulfilled. His plea is that American needs to hear the Christian voice and that his hearers should be that voice.

While there were a few minor issues I could take exception to, like voting when the candidates are all awful (as we have imo with Trump and Clinton) and the slight right wing bias still when it came to sifting through issues, and it begged the question if that is what we are to do there is only one person this time that can fit the role, yet I came away from checking out what Franklin said and has set out to do, surprisingly refreshed. Moreover, he has said exactly what needs saying at this time and we need to respond accordingly.