It was a little over a year ago when I posted my first blog relating to the sanctuary seekers staying in and around Calais in mainly, what will loosely be described as a makeshift camps, where conditions were basic to bad, called the “Jungle” (see “Crisis in Calais”). Two blogs followed later: “Hymnigrants – Calais Shocker” and “Thoughts on my visit to The Jungle, Calais”. Like many items of news, having hit the headlines it then fades into the background until a new development. As far as this news goes, the concerns raised then still remain. After an attempt to move on the camp dwellers by the French authorities, the camp has grown again (estimates are now 10,000 people live there), but recent news is “France’s Hollande: Jungle camp to be demolished by end of year”, and while the authorities have stated the camp dwellers can go to other “official” camps where their claims will be processed, but if it is deemed not allowed to stay, they will then be deported. 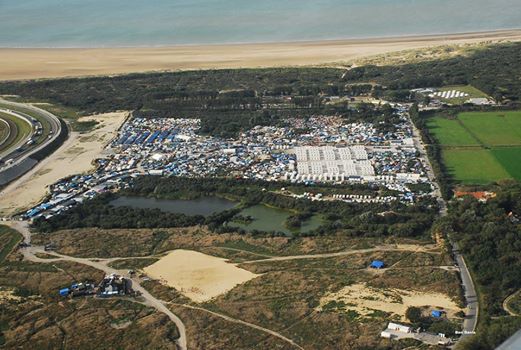 The issue is close to home, not just because it is only 194 km away (a 3 hour car journey via the Channel Tunnel) but also a number of people from my town make visits to the camp,  trying to help. Last night I met one of them, who is involved with a charity called Side by Side, and it was good to meet and find out more of what is going on. As is usually the case, I try to arrive at a balanced view as to what is going on, realising some of the complexities, and what needs to, as opposed to what will, happen, including trying to understand the official perspective (i.e. that of the British and French governments). Many of those in camps would like to be given refuge in the UK and there are regular stories of those taking great efforts trying to enter the UK illegally and some of the security and other concerns around this. As far as the French are concerned, it is a problem they would rather not have, and part explains the latest announcement. There is also the alarming and unresolved matter of unaccompanied minors and government procrastination in resolving these issues and the continuing distress that is being experienced in the meantime.

It seems a rather damming indictment that the money being provided by the British government to deal with the situation appears to be mainly directed at building walls such that camp members do not enter the UK illegally rather than dealing with the real issues, especially child safeguarding. While I understand the focus as far as government is concerned is to help refugees in Syria and surrounding countries through official agencies, rather than those who have entered France illegally, it does appear that they are washing their hands of their humanitarian obligations. Between them, France and Britain are each shifting the blame to the other, and as for the EU they appear inept (one reason I voted Brexit). I don’t have definitive answers and, while long term it would be better if those in camps were to go back to their place of origin, that is not possible now without creating further distress and risk to life.

While I commend the voluntary efforts to provide support, it is too little and too ad hoc. Government (UK and France) should get involved, if only to provide much needed resources and support, and especially to resolve those issues which is beyond the capabilities of the volunteers. They do well to listen to and work with agencies on the ground, such as Citizens UK, who are already doing a good job and ensure until the “crisis” is resolved appropriately, those who are currently living in the Jungle and/or are sanctuary seekers, are dealt with justly, with compassion, and can live securely and decently.