In Part 1 of my “Football World Cup 2022 – the story so far” series, I focussed on non footballing aspects. I turn my attention to the actual football, which has more than aroused interest.

We have seen played 48 of the scheduled 64 games (i.e. we are “games wise” three quarters of the way through) and yet we have only begun to warm up, because from now on (and now is today, and thus me blogging earlier than I might have) teams know they need to win or be eliminated or face the lottery of penalty shoot-out. And the football played, overall, has been good and entertaining.

There have been shocks and surprises (there always is) and while some of the 16 of the 32 to start with teams to begin with may feel hard done by, I think most of the other 16 who have progressed to the round of 16 that is starting later today deserve to be there. While luck will inevitably play some part when it comes to who turns out to be the actual winners, I hope and expect it will be minimal and hopefully anticipate that the best team will win. Who the best team is, I cannot say, because history teaches the team that wins often starts slowly before going on to finish strongly, and such is the format of the competition, all that is needed up to now is to qualify from one’s group, getting in position to face inevitable sterner tests.

I confess, while I have only watched some games, and even then (England included) not the entirety but I have seen snippets from many and taken in the wisdom of some of the pundits. While some bad behaviour when teams did not get their way and/or feel they wrongly missed out (e.g. the Uruguay team playing Ghana), the game has been played in the right spirit and even the lesser teams have had their chance to shine, which they did. I like it that time has been added on for time wasting. Allowing 5, compared with 3 previously, substitutes is significant. The VAR system has been “interesting” and has played a significant part deciding when to allow or disallow goals, when prior to that it would have been entirely down to the referee. And the standard of refereeing has been good, including the World Cup finals first lady referee. I look forward to what is to come. There have been many champagne moments, on and off the field, but the one I pick is when one the only two red cards were given. It was against the Cameroon player who, after scoring his winning goal against Brazil, was rightly sent off for over celebrating, with the referee congratulating him with a smile before doing what he had no choice but to do. 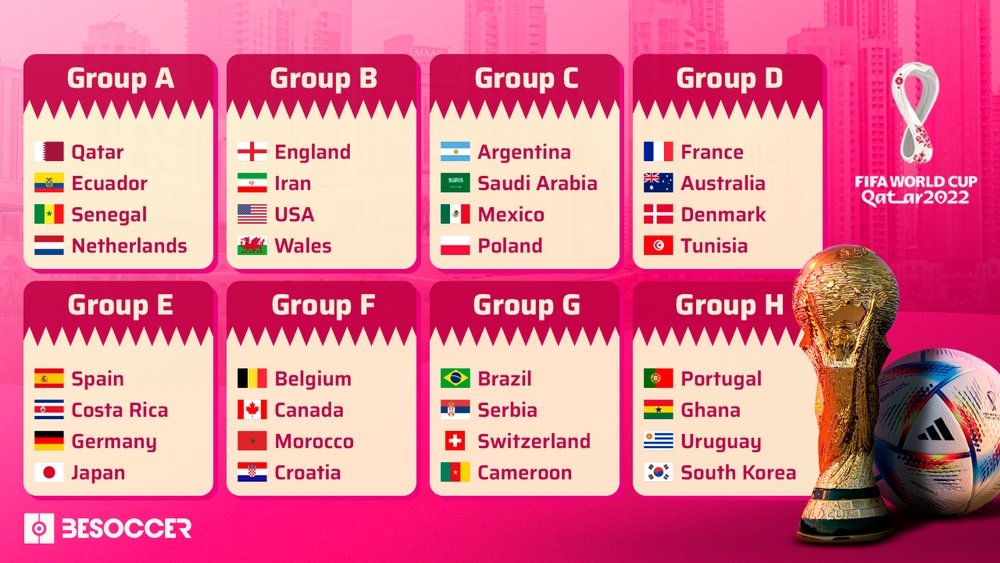 While a little hit and miss, I would like share my thoughts on the football on the field happenings in each of the Groups.

Netherlands and Senegal are rightly through on merit, although Ecuador may feel hard done by and who impressed with their approach, including prayer. It is good to see an African team go through (due to play England). The tournament host, Qatar finished bottom of their group, unsurprisingly losing all their games.

England and USA are rightly through on merit. England flattered to deceive. After winning their first game against Iran in style, were held by a solid USA team, seen prior as one of the lesser sides, and then bounced back with an emphatic win against Wales who, along with Iran, have no cause to complain about going out.

Argentina provided the first shock of the tournament by losing against unfancied Saudi Arabia but then strongly bounced back, headed by Messi, a true legend, with two wins to head the group. Poland qualified in second place, although Mexico will feel hard done by as losing out on goal difference.

France secured top spot by winning their first two games by a good margin, looking good but then relaxed somewhat as afterwards they were beaten by Tunisia. Australia, deservedly turning out to be one of the surprise packages, secured second place, leaving Tunisia and Denmark both feeling disappointment over what could have been.

This group was headed by Japan, perhaps the biggest surprise of the tournament thus far, given they beat fancied Germany and Spain. In the final games, any of the four teams might have qualified, but it was Spain who secured second place. The greatest shock was the exit of Germany, despite beating Costa Rica, who had earlier beat Japan.

Morocco became the second African team to deservedly qualify for the next round by winning their group, with Croatia securing second spot. Canada became the second team to lose (unsurprisingly) all their games and so finished bottom. Belgium will feel disappointed losing out given they began the tournament highly rated by many.

Unsurprisingly, Brazil topped this group and after two wins fielded a team featuring several reserves and losing out to the exuberant Cameroon side. Switzerland secured second spot after managing to beat Serbia in what I understand was a very good game, and while hopeful in the final games, Cameroon and Serbia both lost out.

Portugal, another fancied side, maintained the trend of teams winning their first two games to secure top spot and then losing their third; here against South Korea, relieved to gain second place after earlier losing to Ghana, who then lost against Uruguay in their final game, with both teams disappointed to have been eliminated.