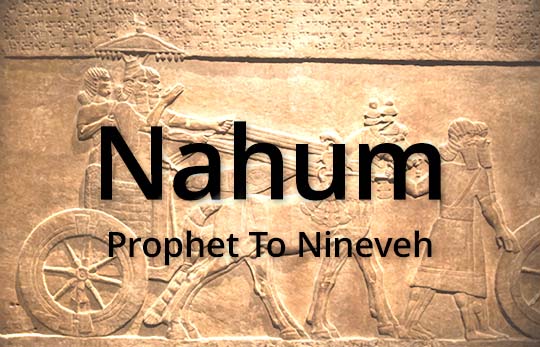 The prophet and his prophecy

The book contains the “vision of Nahum” (1:1), whose name means “comfort”. The fall of Nineveh, which is what represented Assyria, was Nahum’s theme, although the warnings given would apply to all nations that oppress in a similar way, would bring comfort to Judah. Little is known about him except his hometown (Elkosh). Like Jonah, 120 years before him, Nahum preached to Nineveh in their city, a message of judgment. Unlike Jonah, they had reached the point of no return. The Tomb of Nahum remains, to this day, in the town of Alqosh, 50 kilometres north of Mosul, near the site of the city of Nineveh, that fell as Nahum predicted, and was excavated early in the twentieth century.

In 3:8–10 the author speaks of the fall of Thebes, which happened in 663 BC, as already past. While in the first chapter Nahum appears to be speaking generally, in the second and third chapters specifically Nahum prophesied Nineveh’s fall, which was fulfilled in 612 BC. Nahum therefore uttered this oracle between 663 and 612 BC, perhaps near the end of this period since he represents the fall of Nineveh as imminent (2:1; 3:14,19). This would place him during the reign of Josiah and make him a contemporary of Zephaniah, who also did prophesy concerning the destruction of Nineveh, and the young Jeremiah.

Assyria arose as one of the world’s first great empires. Assyria (represented by Nineveh, 1:1) had already destroyed Samaria (722–721 BC), resulting in the captivity of the northern kingdom of Israel, and posed a present threat to Judah. The Assyrians were brutally cruel, their kings often being depicted as gloating over the gruesome punishments inflicted on conquered peoples. They conducted their wars with shocking ferocity, uprooted whole populations as state policy and deported them to other parts of their empire. The leaders of conquered cities were tortured and killed. No wonder the dread of Assyria fell on her neighbors.

About 700 BC, King Sennacherib made Nineveh the capital of the Assyrian empire. Soon after, during the reign of King Hezekiah, he attempted, without success to conquer Judah and besieging Jerusalem. Nineveh remained Assyria’s capital until it was destroyed in 612. Jonah had announced its destruction earlier (Jonah 3:4), but the people repented and the destruction was temporarily averted (see Jonah 3:10). Not long, Nineveh reverted to its extreme wickedness, cruelty and pride. The brutality reached its peak under Ashurbanipal (669–627), the last great ruler of the Assyrian empire. After his death, Assyria’s power waned until 612, when Nineveh was overthrown by Babylon. Nahum could see what was to happen to this proud and “impregnable” city and it happened just as he saw it.

Some words are addressed to Judah (1:12–13,15), but most are addressed to Nineveh (1:11,14; 2:1,13; 3:5–17,19) or its king (3:18). The book, however, seemed to be intended particularly for Israelite readers living in Judah. The book is written largely in poetry form and in the first chapter uses the technique of starting each line with the next letter of the Hebrew alphabet. The contents are primarily made up of judgment oracles, with appropriate descriptions and vocabulary, expressing intense moods, sights and sounds. There is frequent use of metaphors and similes, vivid word pictures, repetition and many short, often staccato, phrases (e.g., 3:1–3). Rhetorical questions punctuate the flow of thought, which has a marked stress on moral indignation toward injustice.

A synopsis of the Book

The message of the Prophet

Chapter 1 presents a complete ‘A – Z’ of God’s indignation and vengeance against a nation that had fallen from the repentant attitude of Jonah’s time to the militaristic cruelty and economic corruption at the time of Nahum. Nahum’s oracle paints a terrifying picture of an awesome God dealing with His enemies. “The Lord is slow to anger, and great in power, and will not at all acquit the wicked” (1:3). He is jealous, avenging, full of wrath, destructive like a whirlwind, like a terrible drought, like an earthquake and like a fire. This chapter can also be seen in more generic terms for it is about how God will deal decisively with wicked nations down the ages, of which Nineveh is but an example. While serving a warning to violent nations, it also provides hope to God’s faithful remnant: “The Lord is good, a strong hold in the day of trouble; and he knoweth them that trust in him” (1:7). “There is good reason for Judah to rejoice: “Behold upon the mountains the feet of him that bringeth good tidings, that publisheth peace! O Judah, keep thy solemn feasts, perform thy vows: for the wicked shall no more pass through thee; he is utterly cut off” (1:15).

Chapter 2 presents a picture of God laying siege to Nineveh, pillaging it and finally overthrowing it. Nahum describes in graphic detail how God as a terrible army, shining red and flashing in the sunlight, advancing on the town, darts from street to street, and coming hard up against the city walls. The people of Nineveh cannot resist because the Lord is set to free His people from this oppressor. Resistance is futile and the city collapses (2:1-6). The detail including the red uniforms and way Nineveh’s defences were breached is precisely what happened. What the Assyrians did to God’s people will happen to them. Terrified, they’ll be plundered, pillaged, stripped of all their assets and carried away into exile! (2:7-10). The war picture ends by likening the Assyrian capital to a pride of lions, once so proud, predatory and well-fed, but now they had disappeared (2:11-13). Notably their conquerors were the Babylonians whom God subsequently used to punish the southern kingdom of Judah.

Chapter 3 completes Nahum’s prophecy by giving God’s reasons for His anger and judgment on the Assyrians. It opens with a curse “Woe to the bloody city! it is all full of lies and robbery; the prey departeth not” (3:1). They were ripe for judgment because of two major sins in particular. The first was the brutality and inhumanity of their conquering armies (3.1-4). They didn’t just conquer, they destroyed and enslaved. God declares He is their enemy because of this, and He will punish and humiliate them as an adulterous prostitute. “And I will cast abominable filth upon thee, and make thee vile, and will set thee as a gazingstock. And it shall come to pass, that all they that look upon thee shall flee from thee, and say, Nineveh is laid waste: who will bemoan her? whence shall I seek comforters for thee?” (3:6,7). Secondly, He charges them with unscrupulous, asset-stripping business practice. Just like corrupt businessmen, when God strikes them, their guards and officials will disappear like a thief in the night (3:12-17). The end has come for the cruel Assyrian Empire, and the whole world will applaud: “Thy shepherds slumber, O king of Assyria: thy nobles shall dwell in the dust: thy people is scattered upon the mountains, and no man gathereth them. There is no healing of thy bruise; thy wound is grievous: all that hear the bruit of thee shall clap the hands over thee: for upon whom hath not thy wickedness passed continually?” (3:18,19). Notably, the ruins of this once great city lay buried and undiscovered until the nineteenth century. We might reflect God is in control of history and he will always have last word. History shows that the woe Nahum pronounced did come to pass.