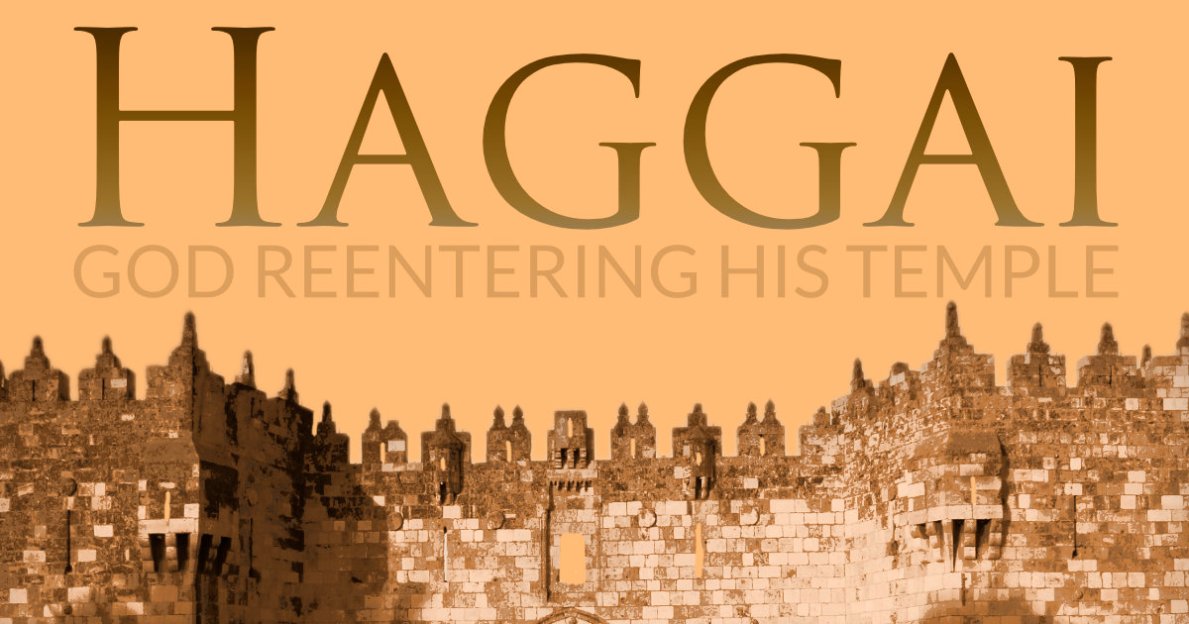 The prophet and his prophecy

Haggai (meaning festal) was a prophet who, along with Zechariah, encouraged the returned exiles to rebuild the temple: “In the second year of Darius the king, in the sixth month, in the first day of the month, came the word of the Lord by Haggai the prophet unto Zerubbabel the son of Shealtiel, governor of Judah, and to Joshua the son of Josedech, the high priest, saying, Thus speaketh the Lord of hosts, saying, This people say, The time is not come, the time that the Lord’s house should be built” (1:1-2). Haggai is referred to in the Book of Ezra, along with Zechariah the prophet who overlapped him at the end of his ministry, and two key figures, also referred to by Ezra: Zerubbabel (the governor – a direct descendant of David and ancestor of Jesus) and Joshua (the High Priest): “Then the prophets, Haggai the prophet, and Zechariah the son of Iddo, prophesied unto the Jews that were in Judah and Jerusalem in the name of the God of Israel, even unto them. Then rose up Zerubbabel the son of Shealtiel, and Jeshua the son of Jozadak, and began to build the house of God which is at Jerusalem: and with them were the prophets of God helping them” Ezra 5:1-2. We know little about Haggai, the man, although some have argued he may have witnessed the destruction of Solomon’s temple and therefore was an old man.

In 538 BC, the conqueror of Babylon, Cyrus king of Persia, issued a decree allowing the Jews to return to Jerusalem and rebuild the temple (see Ezra 1:2–4; 6:3–5). Led by Zerubbabel, about 50,000 Jews journeyed home and began work on the temple. About two years later (536) they completed the foundation amid great rejoicing (Ezra 3:8–11). Their success aroused the Samaritans and other neighbors, who feared the political and religious implications of a rebuilt temple in a thriving Jewish state. They opposed the project vigorously and managed to halt work until 520, after Darius the Great became king of Persia in 522, who encouraged the building to continue. Notably, the two Persian kings between Cyrus and Darius were ambivalent regarding the project and just as significantly did not provide financial support, unlike Cyrus. However, the Jews were more to blame due to their inactivity, and Haggai tried to arouse them from their apathy. Unlike most pre-exile prophets, he was successful in that task, with the four messages he gave, which were recorded, happening over a period of four months: August 29th, October 17th and December 18th (twice). In 516 the temple was finished and dedicated (Ezra 6:15–18). This was seventy years after the first temple had been destroyed, just as Jeremiah had prophesied. Haggai uses a number of questions to highlight key issues (see 1:4,9; 2:3,19). He also makes effective use of repetition: “Give careful thought” occurs in 1:5,7; 2:15,18, and “I am with you” in 1:13; 2:4. “I will shake the heavens and the earth” is found in 2:6,21. The major sections of the book are marked off by the date on which the word of the Lord came. Several times the prophet appears to reflect on other passages of Scripture (compare 1:6 with Deuteronomy 28:38–39 and 2:17 with Deuteronomy 28:22). The threefold use of “Be strong” in 2:4 echoes the encouragement given in Joshua 1:6–7,9,18. The writing was all in prose.

A synopsis of the Book

The message of the Prophet

In Chapter 1, we note his message, on behalf of God, to the governor and High Priest, and it was simple one: ‘Rebuild my Temple!’ When the people had returned to the land, after starting on the task set, they took little interest in completing it. They had built themselves fine houses but hadn’t got around to what should have been their priority: rebuilding the Temple, which had been destroyed when the city fell in 587 BC. The Lord points out accordingly they had not prospered since their returned, despite His promise of blessing. Food, clothes, drink and wages had not met their needs. God had withheld rain and allowed drought because of their slowness to honour Him by building the Temple (1:1-11). “Ye have sown much, and bring in little; ye eat, but ye have not enough; ye drink, but ye are not filled with drink; ye clothe you, but there is none warm; and he that earneth wages earneth wages to put it into a bag with holes. Thus saith the Lord of hosts; Consider your ways.  Go up to the mountain, and bring wood, and build the house; and I will take pleasure in it, and I will be glorified, saith the Lord” (1:6-8). Led by Zerubbabel and encouraged by Haggai, the response from the people was swift and positive: “Then Zerubbabel the son of Shealtiel, and Joshua the son of Josedech, the high priest, with all the remnant of the people, obeyed the voice of the Lord their God, and the words of Haggai the prophet, as the Lord their God had sent him, and the people did fear before the Lord. Then spake Haggai the Lord’s messenger in the Lord’s message unto the people, saying, I am with you, saith the Lord. And the Lord stirred up the spirit of Zerubbabel the son of Shealtiel, governor of Judah, and the spirit of Joshua the son of Josedech, the high priest, and the spirit of all the remnant of the people; and they came and did work in the house of the Lord of hosts, their God, In the four and twentieth day of the sixth month, in the second year of Darius the king” (1:12-15).

In Chapter 2: 10-23 Haggai begins his word with an illustration from the Law, to drive home the message of the need for purity and putting away that which defiles and hinders God’s blessing. It appears the people did respond and we read in the word that follows (3:20-23) of a glorious future for God’s people: “Speak to Zerubbabel, governor of Judah, saying, I will shake the heavens and the earth; And I will overthrow the throne of kingdoms, and I will destroy the strength of the kingdoms of the heathen; and I will overthrow the chariots, and those that ride in them; and the horses and their riders shall come down, every one by the sword of his brother. In that day, saith the Lord of hosts, will I take thee, O Zerubbabel, my servant, the son of Shealtiel, saith the Lord, and will make thee as a signet: for I have chosen thee, saith the Lord of hosts” (3:21-23).