Having discussed the four major prophets (Isaiah, Jeremiah, Ezekiel, Daniel) we turn to the twelve minor prophets (Hosea, Joel, Amos, Obadiah, Jonah, Micah, Nahum, Habakkuk, Zephaniah, Haggai, Zechariah, Malachi), and thus complete our trawl through the Old Testament, with the view to pick up every prophet (and others who spoke or acted prophetically) we find along the way. We will cover here each Minor prophet in the order they appear in the Christian Bible and adopt the same structure as with the Major prophets to keep us on track. 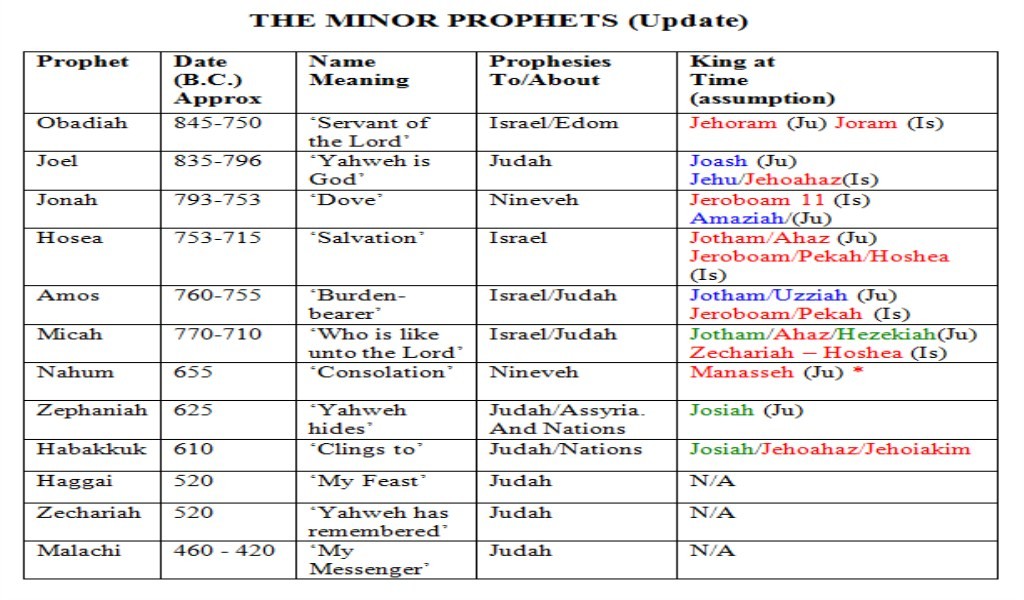 Like most charts, the one above is a mixed blessing. Here the minor prophets are set in chronological order, although in comes cases, specifically Obadiah and Joel, the dates are disputed by scholars. The author does not have a view other than if it is over a hundred years later, as some argue, it does not much affect our understanding of the message, which as we continually point out is the most important aspect of our study. For the rest, we can be confident the dates are fairly accurate because of historical clues in the text and with prophets like Zechariah, he dated his prophecy by both year and month. Other aspects: meaning of the prophet’s name, intended audience and the king at the time, all help us to further understand the all-important context discussed in Chapter 2.

Many of the basic observations we made with the Major prophets apply also to the Minor prophets, but there is enough in each that is unique and merits study, which by ignoring we will miss out considerably on the important contributions made by these prophets. While most prophets dispensed variations on the theme of judgment and repentance and restoration and hope, each did do according to the circumstances prevailing at the time, the prophet’s specific calling and their particular perspective and gifting. While what each major prophet prophesied was major, the same is true for the minor prophets; they happened to write less. Like the major prophets, the minor prophets also experienced rejection. They were a mixed bag, from different strata of society, with a number from more humble backgrounds and called to minister in rural areas. They were called to different audiences, faithfully passing on the message God had given them. The common factor all major and minor prophets had was they were used by God.

722 BC and 586 BC are two key dates to bear in mind; the first being when the Northern Kingdom (Israel) was taken into Assyrian captivity and the second when the Southern Kingdom (Judah) was taken into Babylonian captivity. Those two significant events overshadowed much of the prophesying of the Minor prophets. 931 BC and 800 BC are two other dates worth keeping in mind; the first is when the kingdom was divided following the death of King Solomon and the second approximates the death of the prophet Elisha. Elijah and Elisha were the two main prophets following the division of the kingdoms, and prophesied to Israel, and all the minor prophets followed then. While the major prophets operated in Judah, nearing the time of the Judean exile, and then Babylon after the exile, the minor prophets operated from before that time, and in both Israel (while around) and Judah, and following the return from exile.

In the Jewish Bible, the twelve minor prophets featured in a single book, “The Book of the Twelve”, where the prophecies of the twelve minor prophets can be read as a single unit, notwithstanding the uniqueness of each. The twelve books in the Book might be considered in three groups: (1) the books that came from the period of Assyrian power (Hosea, Joel, Amos, Obadiah, Jonah, Micah), (2) those written about the time of the decline of Assyria (Nahum, Habakkuk, Zephaniah) and (3) those dating after the Exile (Haggai, Zechariah, Malachi). Irrespective of how we might be inclined to view the Minor Prophets, what we can learn from their lives and ministries are every bit as important as what we found when we covered the Major Prophets and so we begin with the first …