My first hit on doing a google search came up with “In political jargon, a useful idiot is a derogatory term for a person perceived as propagandizing for a cause without fully comprehending the cause’s goals, and who is cynically used by the cause’s leaders”, which I will go along with, but who are the useful idiots? 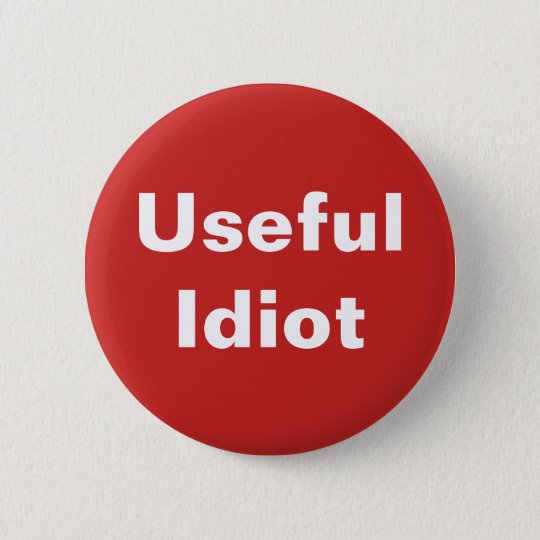 Before I go on and try to answer the question and say why it is important, I should begin with a caveat, and where better to start than the Bible: “But I say unto you, That whosoever is angry with his brother without a cause shall be in danger of the judgment: and whosoever shall say to his brother, Raca (you empty-headed idiot as one translation puts it), shall be in danger of the council: but whosoever shall say, Thou fool, shall be in danger of hell fire” Matthew 5:22, which suggest calling someone out as a useful idiot, even if that is what we think, may not be a good idea. Even so, the Bible is also about the truth setting us free and righteousness exalting a nation. We would be remiss if we neglect such matters.

But it is a term I have seen banded around rather a lot of late, often as a stick to beat people up with, and it could at various times and circumstances apply to any one of us and none of us get it right all of the time. This all got me thinking. When I searched the Internet for a suitable meme to hang this post on, I was disappointed with the outcome. But one thing the search did confirm is that whether or not a person should be considered to be a useful idiot will depend on what you think about that person’s beliefs and in particular how those beliefs are manifested. Take Donald Trump, for example – if you are against Trump, those speaking in his favour you might consider to be useful idiots and if against him you may give them your nod of approval. The opposite might be the case if pro-Trump.

One of the shocks that I have long since got over when I began putting forward my views on any number of controversial subjects on social media is that in these days when subjects like Trump, Brexit, political ideology, climate change and now the causes, cures and consequences of COVID-19 is that people, including people I would like to call friends, are often deeply divided and this can lead to falling out. A week or more ago, I commented favourably when Trump referred to COVID-19 as the Chinese virus, because although he could have elaborated to prevent misunderstanding I believe he was essentially correct. I did so because I believe with good evidence, for example this article: “The West Needs to Wake Up to China’s Duplicity”, that the West are being manipulated into believing the likes of Trump are the bad guys and that of the Chinese Communist Party are the good guys. The reality is Trump and the CCP have vastly different visions for the world; which one prevails will affect us all. Sadly, I received a torrent of unpleasant public criticism by one person, making me think what to do for the best.

Sometimes in life it really is a matter of confessing our ignorance, being humble and while questioning the official narrative and some of the more draconian measures put in place, for the time being will go along with “expert” advice and obey the government. The truth is we don’t know even half of what is going on. Sometimes we need to be sensitive to the situation and in cases like the Corona shut down realize people are scared and focus on present needs like providing comfort and keeping safe. But there are limits and if we back the wrong horse so to speak it can end disastrously, e.g. if the wrong sort of world that emerges when Corona is eventually cracked. It is not helped when we can’t trust the media or our leaders and while we should test those claiming special knowledge we shouldn’t be dismissive either, since so much does not add up.

It has ever been thus that the bad guys have often managed to drum up support from persuasive, well meaning useful idiots, with the result being bad overcomes good rather than the other way round, with the good guys vilified, only to be celebrated after their death when proved right. Besides the need to not fall into whatever the trap is, it sometimes matters a lot knowing who the “useful idiots” are and challenging them after getting our facts straight, and despite wanting to be winsome, truthful and biblical etc, I may incur more anger and annoyance by people who follow me on social media when I thus feel compelled to say things they would disagree with.