Today me and a chum I often meet up with, when we try to put the world to right over a decent breakfast, did so at the Wakey Wakey Café in Leigh, and that just before the Corona lock down.

We try to go for somewhere we haven’t been before; this particular establishment was rated highly in Trip Advisor; and we have never had breakfast together in Leigh, which is where, so we are led to believe, the cool folk go. Wakey Wakey therefore ticked all boxes and when we arrived just before 10am it was looking busy and from what we could make out included doing a trade in take aways. 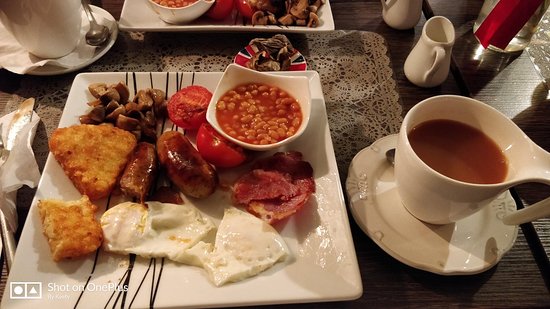 We found a nice spot out of the way in a corner and where the ambience was agreeable. We had to wait a little while before we were served, due to it being quite busy and not many staff. We ordered what was effectively in the picture above. We enjoyed our breakfast and the opportunity to talk in nice surroundings. But if pressed for a view, I was not wowed. The food was ok to good but not fantastic, although it did pass the important decent sausage test. A large cup of hot water and a tea bag is not my idea of a pot of tea, although I thought serving with a complementary biscuit was a neat idea. The service was quick once ordered and efficient but not particularly friendly. The value was ok but not much more than that.

I don’t want to be churlish etc., but given the raving reviews we had expected more and was a little disappointed. While I would be happy to return, given it is some trek to get to from where I am, there is not enough going for Wakey for it to be anytime soon. I should add that later that day the government announced that eating establishments such as this should close because of the Coronavirus. While I came at a good time insofar it would be my last breakfast eating out opportunity for a while, it could also be those responsible at Wakey’s had an inkling this would happen and bracing themselves for the inevitable, so not a good time to judge.