FOR MY INDIAN FRIENDS, FRIENDS OF INDIA AND ANTI-TRUMPERS ESPECIALLY … 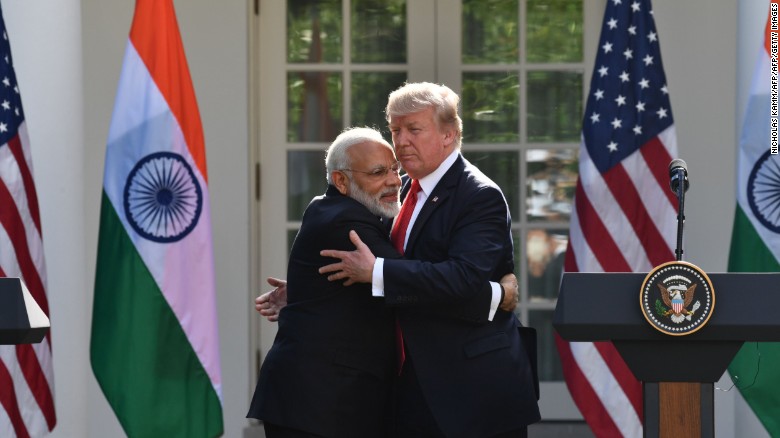 With India being a country I love and my second home as it were, I was naturally interested in news of Trump’s visit there. It all seems to have gone down well for Trump, with the Indians liking him.

One pro-Trump introduction to an important speech he made (see here) stated that: “President Trump held his largest rally ever in the new Cricket Stadium. Speaking to his largest crowd ever (over 100,000 people) president Trump strengthened U.S. India relations. Our fearless leader also landed a HUGE Military Aircraft deal (worth $3 Billion). Where does all his energy come from?”

Franklin Graham wrote enthusiastically on his Facebook page with comments in kind, concerning Trump’s visit: “Today President Donald J. Trump spoke to a cheering crowd of more than 110,000 people in India at the world’s largest cricket stadium. He talked about our ultimate purpose and said: “In America and in India, we know that we are all born for a higher purpose: to reach toward our fullest potential, to work toward excellence and perfection, and to give all glory to God.” Thank you President Trump for not being afraid to mention the name of God and seek to give Him the glory as you address our nation and the world. Christians across America continue to pray for you, Melania, and your family”.

Besides being less than enthusiastic over this glowing introduction and Franklin Grahams cringe worthy endorsement, and while I like the idea of the USA and India getting along, I am uncomfortable with the way he has buttered up to Prime Minister Modi – birds of a feather it would seem (both are fervent anti-globalists, inclined to popularism with a shared antipathy to the prospect of the Chinese taking over, and while Modi can’t take the credit, many Indians who emigrate to the USA have the can do attitude Trump so much admires). He did NOT raise the matter of Indian’s persecuted minorities – Muslims and Christians – a matter that I have often written on – accentuated because Modi is beholden to Hindu extreme elements, e.g. RSS, for his power, who recoil from the thought that India’s 14% Muslim and 2% Christian population (out of a 1.3 billion population) could convert or undermine the social structure of some of its 80% Hindus with its unwelcome ideology.

Yesterday, I was accused of being more interested in being entertained and leaning to sources that reinforce my Trump sympathizing leanings. I confess a lot of nuances arising out of the visit I don’t get and, like him or not, Trump is a political genius (which in my controversially humble opinion is as a result of being anointed by the Lord), but I am disappointed, not just that the pro and anti Trump camps are so polarized and don’t give a balanced view, but in standing up for those who could really benefit from Trump’s support at this time, including sincere, simple minded Christians who do what they are meant to do – practice their faith, he has let them down. As with his dealings with North Korean leader, Kim Jong-un, so with India’s leader, Narendra Modi – both bear responsibility for the persecution of religious minorities (which is significant and if anything has escalated under their watch) and in neither case (to my knowledge) did Trump say anything. Ignorance and being not well advised is no excuse for someone who prides himself on straight talking, being smart and doing the right thing. Trump has been rumbled! While it is just my impression, he seems to be more than prone to respond in kind to being flattered and has conveniently chosen to ignore the dissent taking place right now and the often heavy price played by the dissenters for reasons of conscience, in order to appease the god named “the art of the deal”, his own personal vanity and while shunning globalist liberals has been more than generous toward authoritarian and popularist types.

Before my anti-Trump friends gleefully clap their hands in the belief that scales have just fallen from my eyes, let me confirm I remain a Trump supporter and hope he gets a second term as President when Americans come to vote in November. I do so based on the belief he is simply better than the alternatives and has already began to drain the swamp, dismantle the deep state, secure America’s borders, grown the economy, created jobs especially for minorities, tackled children sex trafficking, appointed judges that follow the law rather than make it up as they go, stood up for the unborn, supported religious freedom, done away with one sided trade deals, seen though the climate change hoax and stood up for Israel.

Trump has been likened to a variety of Bible characters, ranging from King Cyrus to King Herod. These days, I tend to see him more like a 21st century King Jehu, who was anointed by Elijah / Elisha to drain the swamp in his day and undo the appalling legacy of wicked King Ahab and Queen Jezebel. This Jehu did and Trump has shown promising signs of doing the modern equivalent. Sadly, Jehu did not continue in the same vein. Having drained one swamp, he created another and God judged him as a result. I see dangers of Trump doing similar. I hope and pray that he will come to see that he can play a part in protecting those who are being attacked, all the world over, because of their beliefs. If he does not, he too will incur the displeasure of the Almighty. As for me, I will continue to search for truth and getting the right balance. I will endeavour to speak out on behalf of those who are oppressed, especially my Christian brothers who suffer for their faith, irrespective which birds’ feathers I ruffle.