Yesterday, I had a strange experience connecting the dots as I studied the Bible, read posts and articles on my Facebook page and watched a number of videos including:

But first it began with a continuance of my study in the Book of Ezekiel, the latest in a long line of prophets I have been studying. While it was exhilarating to study, the tragic backdrop was God’s judgment on Judah, which included the destruction of Jerusalem and God’s special people being exiled to Babylon.

As I reflected on various Facebook posts, I was particularly struck by Video 1 as presented by Frank Schaeffer, son of a hero from my younger days, Francis Schaeffer. What Francis Schaeffer did through his writings, many of which I read at the time, was open my eyes to the culture wars and how western civilization has gone astray through its abandonment of its Judaeo-Christian heritage. This also helped give rise to the religious right, which has been a mixed blessing and something his son has vehemently rejected as he urged people to vote Democrat and take Trump to task, for example regarding separating families illegally entering the USA.

Video 2 and video 3 were messages by two people I do not know much about: Michael Brown and Mike Thompson. They both see America, including sections of the church, succumbing to the Jezebel spirit e.g. in its celebration of abortion right up to a baby being delivered. Jezebel was a wicked woman and you can read all about her in the book of Kings. She was a foreign princess and a priestess on behalf of Baal worship, married to the weak, easily manipulated king of Israel – Ahab. She was a wicked woman. 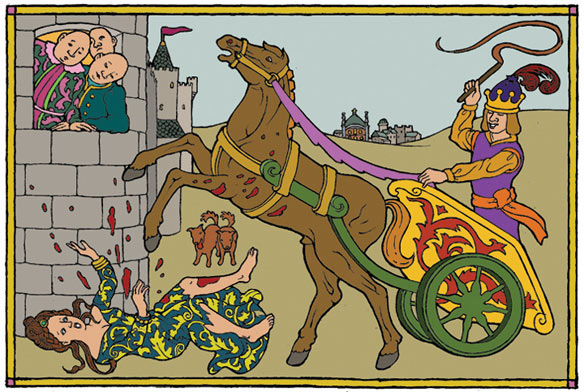 The story of Jezebel, also referred to in Revelation 2 as one responsible for corrupting the church at Thyatira, and that of Jehu who Elijah was commanded by God to anoint as His instrument of judgment concerning the legacy of Ahab and Jezebel is one that I find particularly intriguing. Jehu did what God commanded him to do by ridding the land of Baal worship and Jezebel and all those involved in the cult she had helped to set up. Sadly, he fell away at the end by re-instituting the worship of the Golden Calf.

Both Brown and Thompson see Trump as a Jehu type character. As those who read my blogs may recall, I have in the past likened Trump to a King Cyrus and a King Josiah, although many good Christian folk reject the notion, including one whose understanding of culture wars and Christian theology is normally spot on who sees Trump more like a Herod. More recently, I have been seeing Trump more like Jehu, given how God has and does anoint imperfect people for a specific task, which is how I see it with Trump.

I sadly disagree with Frank Schaeffer, especially given his dad was my hero, but I do agree with Brown and Thompson. The more I view the culture and what is taking place in sections of the church, the more I see the spirit of Jezebel as having crept in. I rejoice that God has anointed Trump, and while his ability to resist the spirit of Jezebel and its numerous evil manifestations is limited and it does not let the Lord’s people off the hook when it comes to wavering between two opinions, I am glad he is there to do battle.