I learned yesterday about the leaked “Trump – clumsy and inept” memos when a friend posted news of this on his Facebook page. Some of his friends agreed British Ambassador, Sir Kim Darroch, was quite right to offer his views describing Trump disparagingly in what was meant to be a private briefing to UK government movers and shakers, and as for Nigel Farage, offering his opinions on his own LBC radio show, the Radio 4 Today program and the Daily Telegraph, he was wrong to call for Sir Kim’s dismissal. 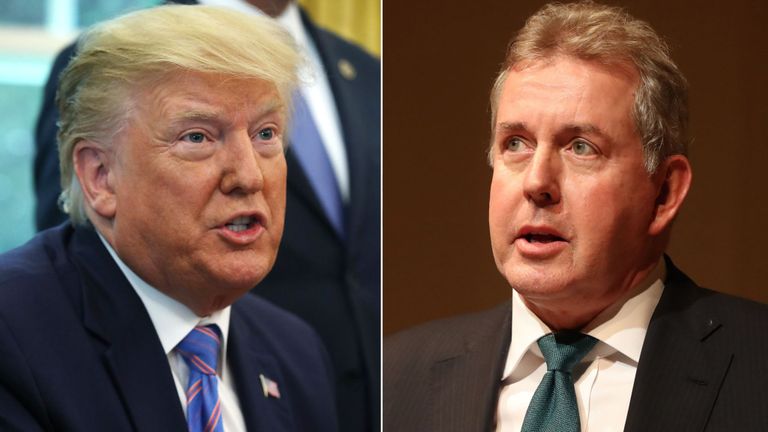 I happened to agree (no surprise here) with Nigel and was asked to explain myself. As often happens, more water was to flow under the bridge since then, particularly, as I was to find out in today’s Today program that President Trump not only had made a typical rebuttal of Sir Kim’s comments but withdrew an invitation to one of those “dos” diplomats typically get invited to. In the Today show, a former British ambassador to the US defended Sir Kim and diplomatically said why Donald was wrong. Moving on, to try to get a better picture of what was going on for this article, I read and listened to more, including a defense of Trump  and a call for Darroch to be removed by not my favourite interviewer, Piers Morgan.

As often is the case, lots of people have offered a range of opinions, covering a number of points, so here goes with my two penneth:

I believe Sir Kim should go. His comments were undiplomatic, embarrassing and unhelpful for good USA / UK relationships, and importantly show lack of judgment and definite bias, given his briefings will influence, as they are meant to do, UK foreign policy decisions regarding its relationship with the USA. It seems to me it is one thing to offer genuine concerns “diplomatically” and another to push a false narrative, as I believed is what happened in this case. Of course we don’t know the full context or contents of the memos, so this is based on what we do know from the leaks.

While I accept briefings should be confidential, and quite possibly the “leaker” was out to undermine, in this day when leaks are common place, common sense says, while giving best advise, don’t say anything that could later back fire especially when dealing electronically. I am of the view that knowing what our elite movers and shakers are thinking / saying is often a good thing, if for no other reason (as in this case) to confirm our top ambassador is a globalist, never Trumper, and confirms the rose tinted view our diplomats act diplomatically and in doing so will put aside personal opinions and those of Trump haters however juicy, is a wrong one.

While I like the UK government stance of standing by your man, not yielding to cries of displeasure by the likes of Donald Trump and being prepared to tell him so, and in this case he has shown too thin a skin and he might be better advised to take on board criticism and deal with it in a less confrontational way, it doesn’t help to create needless barriers. But then, unlike Sir Kim, Trump is not a diplomat.

So in conclusion, I stand by my opinion voiced yesterday that Sir Kim should go, offering these as my reasons.