As some folk will know, I have a particular aversion to political correctness and as I look back on my own life I reckon I have suffered because of it more than having benefitted. Part of that is down to my propensity of speaking my mind and a lack of wisdom at times in my choice of words. But I see PC as having, on balance, a detrimental effect on society. In my twilight years now I am past caring, I can express what I feel without fearing recriminations, reasoning if I don’t who will stand up to the PC mafia. For this reason, when I saw the following meme I shared it on my Facebook page, and then was taken aback by the number who “liked” it, leading me to believe others feel similarly, and my tiny contribution to waking people up to what is happening is having an affect.

The first google hit when searching for a working definition of political correctness was “the avoidance of forms of expression or action that are perceived to exclude, marginalize, or insult groups of people who are socially disadvantaged or discriminated against”, which I consider reasonable and one “the other side” would find acceptable. One point made by a member of the other side is that political correctness can be a good thing given the hurt and harm caused by people who do voice their opinion, especially if using derogatory language. My own view is that people should be free to express an opinion providing they don’t break the law designed to protect those who could be untowardly affected as a result, and it is not unreasonable for employers etc. to insist that their employees moderate their tone, although sadly as I review cases over the last ten years from an employee being demoted as a result of expressing a view that gay marriage is wrong on his social media page to a rugby star (interestingly doing something similar regarding a related matter) being released from his contract, I conclude we are seeing the bad side of political correctness. I also recoil at the thought that those who arbitrate on whether a voiced opinion is acceptable are NOT the good guys. Later, and by chance, a friend happened to share a newspaper clipping of someone due to share in BBC’s “Thought for the Day” being told to withdraw the words “Christian heritage” when pointing out this is an important reason for some of the positives in our culture and because he refused his contribution was not accepted. Even today I was told to desist when offering politically incorrect views concerning climate change in what I thought was an open to all Facebook discussion.

Going back to the meme, I was taken to task for sharing by a Christian friend: “I wonder if it’s a good example to post memes with profanity? The Bible says … James 3:11 “Doth a fountain send forth at the same place sweet water and bitter?”” While I felt the meme was worth sharing because it made an important point and the originator may not feel as constrained as me and my friend when it comes to using profanities in making a point, I have to concede she may be correct because one of the unintended consequences of offering an opinion is it could stumble the very people we want to reach.  As for me, I will keep banging the drum regarding my aversion to political correctness and the harm it does in not allowing the free exchange of ideas and for people to offer a view. At the same time, it is back to one of my favourite passages concerning there being a time for everything under the sun. We are in a culture war and how, on the matter of political correctness, this will pan out, we cannot be sure. Historically, there has always been constraints when offering an opinion, and not just how we express that opinion but all the acceptability according to those with the power of that opinion.  Where I am now (in the UK) I should count myself fortunate within limits I can do so, but it isn’t like that everywhere and may not be so here, sometime soon. And while I would counsel the mother to use more moderate language, her response to her daughter’s “what is political correctness” question is essentially and regrettably correct. 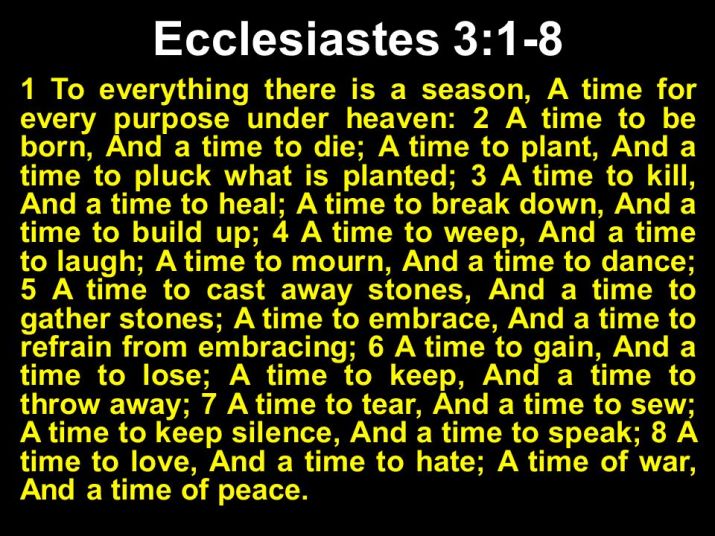 Whether or not something is true is more important than if it is politically correct, and while I can see a case for calling people out for inappropriate use of language and for challenging an opinion if one disagrees with that opinion, truth should be the yardstick when judging this, not whether according to cultural norms etc. that opinion and the way it is voiced meets PC standards. And even if that opinion really is wrong (but who is qualified to say so) that is a price to pay for having a free society. Finally, I would encourage anyone to follow the wisdom of the good book (expressed in my second meme), especially on the time to keep silence / speak.