Two weeks ago I posted part one of a two part series on the right Christian approach to money (see here).

In it I gave my own testimony concerning this important subject. I had been and still am taken aback that good Christians think quite differently on the right approach to money e.g. whether or not they should tithe and should that tithe go to the church group they are part off. I argued no it is not mandatory on both counts, based on my own experience but more pertinently my own understanding of scripture. I also concede that it is likely the Christians who take giving most seriously are those who intentionally  tithe, although there are exceptions, and I am one of them. My overriding principle in attempting to answer the question I ask above is not merely to argue against legalism but rather to recognize that we are and ever will be, while on earth, the Lord’s unprofitable servant entrusted with gifts we use for Him, and need to exercise good stewardship, and that means recognising “our” money and all we have really belongs to the Lord, and is to be used in His service.

If I have a preacher hero on the subject of money, it is John Wesley. While I admire Wesley for his gospel fervor and Christian devotedness, he is a long way normally from being my favourite preacher – after all he was an Arminian and I am a Calvinist, but even so, on this matter he got it right. One rule he followed throughout his life is one few I know follow (I don’t because I don’t have his methodical approach) and is not one I necessarily fully recommend. As a poor preacher he worked out his expected expenses and what was left (which was less than 10% of his income) was given away. After, his income steadily increased but his expenditure remained much the same. He ended giving away over 90% of his income. For Wesley, it all belonged to the Lord anyway and his was a matter of good stewardship. The meme above sets out the three key principles (like the headings of a three point sermon) that governed his approach. Like all memes, it requires elaboration and any “right approach” on matters such as this has to be that of the Bible. In order to expound, I refer to an article titled “What Wesley Practiced and Preached About Money”

Gain all you can

“Despite its potential for misuse, money in itself is something good. There is no end to the good it can do: “In the hands of [God’s] children, it is food for the hungry, drink for the thirsty, raiment for the naked. It gives to the traveler and the stranger where to lay his head. By it we may supply the place of a husband to the widow, and of a father to the fatherless. We may be a defense for the oppressed, a means of health to the sick, of ease to them that are in pain. It may be as eyes to the blind, as feet to the lame: yea, a lifter up from the gates of death!” Wesley adds that in gaining all they can, Christians must be careful not to damage their own souls, minds, or bodies, or the souls, minds, or bodies of anyone else. He thus prohibited gaining money through industries that pollute the environment or endanger workers”.

Save all you can

“He urged his hearers not to spend money merely to gratify the desires of the flesh, the desires of the eye, or the pride of life. He cried out against expensive food, fancy clothes, and elegant furniture: “Cut off all this expense! Despise delicacy and variety and be content with what plain nature requires.” Wesley had two reasons for telling Christians to buy only necessities. The obvious one was so they would not waste money. The second was so they would not increase their desires. The old preacher wisely pointed out that when people spend money on things they do not really need, they begin to want more things they do not need. Instead of satisfying their desires, they only increase them: “Who would expend anything in gratifying these desires, if he considered that to gratify them is to increase them? Nothing can be more certain than this. Daily experience shows that the more they are indulged, they increase the more.””

Give all you can

“One’s giving should begin with the tithe. He told the one who does not tithe, “Thou dost undoubtedly set thy heart upon thy gold” and warned, “It will ‘eat thy flesh as fire!’ “But one’s giving should not end at the tithe. All of the Christian’s money belongs to God, not just the first tenth. Believers must use 100 percent of their incomes as God directs. And how has God directed Christians to use their incomes? Wesley listed four scriptural priorities:

For the sake of brevity, I merely gave an essence of what Wesley preached. It is a far cry from today’s prosperity preachers and those who acquire large wealth and keep it for themselves. Mine is not to judge because ultimately it is a matter of conscience and between you and your Maker how you handle money. While I have followed Wesley’s advice imperfectly, I am glad that to some extent in earning all I can and saving all I can I have been able to give substantially to and serve in the Lord’s work, including many years at the end of my working life not receiving much by way of earned income. If I have a regret, it is I could have earned more and saved more and therefore given more. If I have a model, it is my own father-in-law, who died this year. He was an evangelist that not only provided for his family but gave generously to the needs all so evident needs of others. He trusted the Lord to provide and He did. Money was a mere commodity to be used to bless others and extend God’s Kingdom.

When advising the young as to career choice, it often seems right to tell some to get the best education they can and learn to succeed in business, often employing others and giving to the Lord’s work where the needs from my experience are mammoth. This is no less valid than becoming a doctor or a preacher, for example. Even if one ends up doing menial work, that is good also if that is what the Lord wants. It does after all depend on gifting and opportunity and serving the Lord as best one can and as He directs. One thing I struggled with in my zealous youth was whether to live in austerity, especially given there are many far worse off materially. Again, I believe there is some latitude, and while we should not live extravagantly, we are not necessarily called to live in poverty either. We are called to be thankful and trust the Lord for our daily bread.

There is much that can be said on the right Christian approach to money and the Bible is full of what can be regarded as good practice. This is far from being a definitive list but here are some things to consider. Each point relates to Bible teaching and during my own lifetime have been some of my key guiding principles.

We are at best unprofitable servants

The Lord owns the whole universe

The importance of honouring the Lord Give such that others don’t know you are giving

The Lord loves a cheerful giver

The left and right hand principle is the one to follow

Giving faithfully is what is needed; God will do the rest 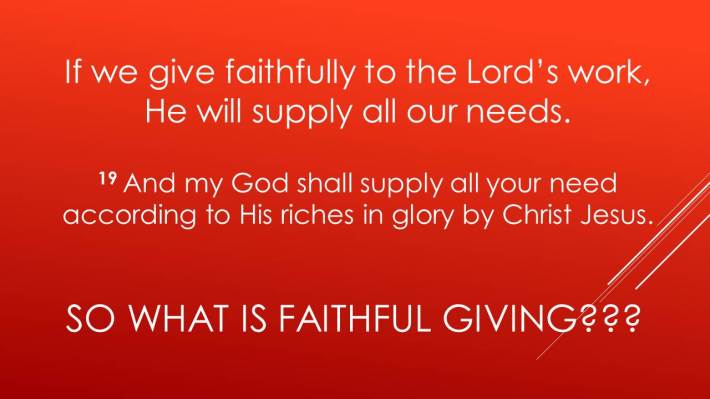 The more we give the more that will come our way 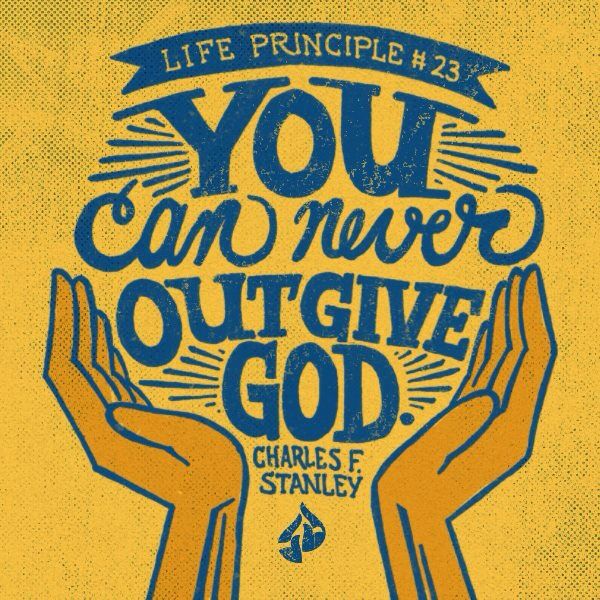 There is a reward for good stewardship

Everything we give belongs to the Lord’s anyway