I hope I don’t give the wrong impression with this recent spate of reviews of eating places in the town (Southend) and particularly concerning my favourite meal of the day – breakfast. And I am open to offers to anyone who wishes to sign me up as a reviewer!? Today it was the turn of the Early Start Café and Diner in Sutton Road, following working out at the gym. It has been some time since I visited there, and with most places I return to after a while, I braced myself for possible changes since I last visited. 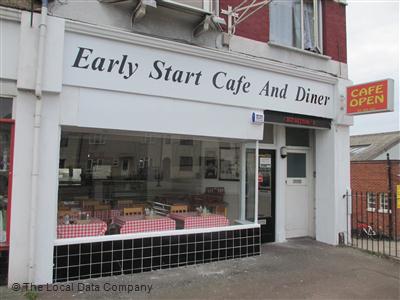 There were a number of people inside the cafe when I arrived and I was faced with a menu which included breakfast deals that offered six different combinations, none of which was my ideal mix. I chose the one costing £5, including tea and bread and butter and, for a change, it included fried bread, something I haven’t had for a while but rather liked. I was told afterward that swapping items was possible. I noticed one of the options included bubble and black pudding and as far as English breakfasts goes all bases were covered item wise. I noted it did a limited choice lunch time menu.

My tea and bread arrived promptly and before I finished reading the customary Sun newspaper the breakfast arrived. It was warm and cooked to perfection. I thought the tea was especially nice and it was a big mug! The down side was the sausage which was passable but no more (although I was assured they buy in more expensive sausages), which is a common occurrence among many cheaper breakfast places. But I enjoyed my breakfast. The environment was pleasant and relaxed. The service was cheerful and efficient. The breakfast was good value. It is a place I will return to, possibly to get their good value bigger breakfast, and it compares favorably with other cafes serving full English breakfasts.

One thought on “Eating at the Early Start Café”