My Facebook feed yesterday was full of it, at least by the usual suspects that operate alongside my liberal luvvie friends, although not much it seems has been said on mainstream media – maybe because they are ‘fake’, considering their obsession with the Russian poisoning story coverage for example and ignoring stories like these, or maybe because there are restrictions on what they are allowed to report. The Independent (not my favourite newspaper these days) did report: “Tommy Robinson arrested for ‘breaching the peace’ outside court during grooming trial”, which is precisely what did happen and is something that should concern us. 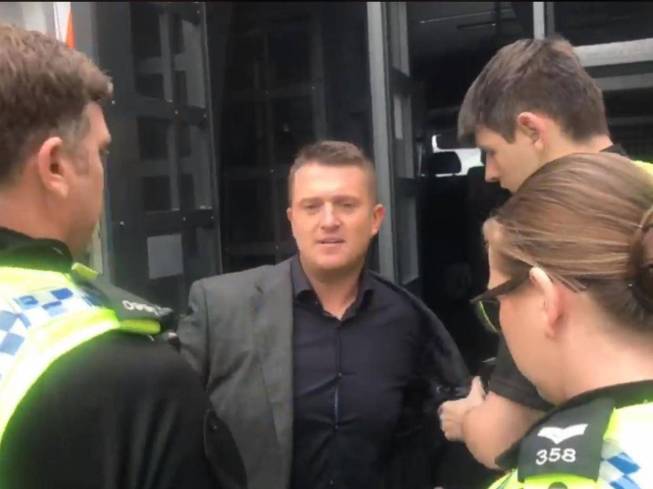 The report continues “Tommy Robinson has been arrested for allegedly breaching the peace outside a court during an ongoing grooming trial. The far-right activist showed men entering Leeds Crown Court in a livestream on Facebook, where he claimed to be “reporting” on the case. After more than an hour of broadcasting, footage showed police officers approaching to arrest him for alleged breach of the peace and incitement.” I understand Tommy was quickly dispatched to jail to serve a 13 month sentence.

I confess that more research is needed for a more measured, balanced coverage, but in the meantime I shoot from the hip and raise concerns concerning a man that in the past I disliked but have since come to respect and admire (and paid the price for doing so by some of my liberal luvvie friends – suggesting I might be on the right track) for raising concerns over the Islamification of the UK and the attack on free speech, which as far as I can make out has not been dealt with satisfactory by the powers that be and has been ignored by the public at large. The sex grooming gangs that have operated in recent years by largely Asian Muslim men have carried terrible crimes and inaction by the politicized police out of fear of alienating Muslims and acting politically correctly has been a scandal that has been rather shoved under the carpet.

Tommy’s exposing what has largely been hidden is something I welcome, although doing a live video stream outside a court where a hitherto unpublicized sex grooming trial was taking place, was perhaps unwise. He had after all been arrested previously for a similar offence and his condition for release he does not repeat. It is noted too that there have been many previous cases of sex crime trials involving high profile persons that have been fully reported.

If you want to know more views of what took place and the implications thereof, the following You Tube videos (admittedly most pro Tommy and most (interestingly) originated outside the UK and all raising concerns over British justice, unchecked wickedness and tyranny and the attack on freedom of speech) I have found to be particularly enlightening and pointing to much bigger issues:

As I have often pointed out, my country is in a moral and spiritual malaise and I see no way out of further demise and devastation other than an intervention by the Almighty, which is where I will be focusing my efforts. While I find the labels ‘Left’ and ‘Right’ to be unhelpful, I actually sympathize with friends on the Left (Labour, Green and some anarchist types) who raise on a regular basis examples of societal injustice that the dastardly Tory government have allowed to go unaddressed. I do have my doubts as to whether they will effectively challenge the establishment but I will continue to support them when they are right. As for the Tories, they have lost their way e.g. over Brexit negotiations and withdrawing support for those who are most vulnerable, and I speak as one who has been accused of being right leaning. UKIP who did much to bring about the much needed EU Referendum are no longer the force they were.

While Tommy overstepped the mark and broke the law by streaming his video, the official response seems to me to be disproportionate given what it was Tommy (now as close at gets to being regarded as a political prisoner) was doing – alerting the public to long overlooked dangers and something that they need know (that have all the marks of an official cover up), like the unaddressed issues of Islamification and the curbing of free speech, as well as the wicked crimes that have been committed. It begs the question too of how to respond to the growing rise of authoritarianism and how this might be resisted, as the demonstrations that are not being accurately reported by mainstream media are beginning to show. There is as aching void in British politics waiting to be filled and I fear it won’t necessarily be filled by nice people like me. The Tommy Robinson story merely illustrates one reason why I believe this is so. Yet wakening the wider public from their apathy and making politicians aware and accountable seems to be the way to go.

Perhaps the final word should go to the Gatestone Institute whose rather damming analysis in “Swift Injustice: The Case of Tommy Robinson” lays on the line some of the key issues at stake that should concern us all, as to why what happened to Tommy did, even if he had acted foolishly in this instance. It makes me think twice when offering these views, despite being done in good faith and because of the importance of the issues at stake, for it could mean I fall foul of the law – a rather frightening prospect. Rather than send him to jail, he should be honoured for raising the alarm. It leaves me now to ponder where this will all end and whether we are beginning to see a new tyrannical dark age.