Earlier in the week I attended the funeral service of Florrie Bond, aged 97. The funeral went well and as is often the case it was good to catch up with family and friends and pay our respects to the one who had died. I knew Florrie for much of my life, and this was because she was actively involved with the church I also attended. 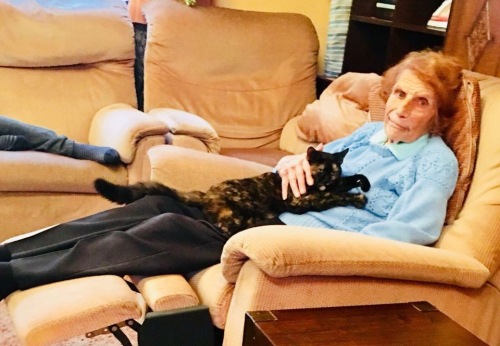 This is Florrie in our lounge along with Patchy our cat; this was taken early January 2018 a little before she became unwell

Florrie was in many ways a remarkable woman, although unassuming and often not given the recognition she deserved. She had many strings to her bow besides being a great talker and she was bright as a button and observant with it. She had a stubborn streak though and that sometimes put us on collision course. She was a genuine sort, with a kindly manner, who could be depended upon. She had a broad range of gifts ranging from gardening, craft making, seamstress and cooking, all of which were put to good use. She was willing to help out when there was a need and one example was at the Mums and Tots group at our church, where she cheerfully did what was needed, despite her advanced age.

When my wife came to England 22 years ago, she soon met Florrie and they quickly became friends and often met up outside of church. She often came to our house for dinner and she passed on cooking skills to both my wife and son. Florrie became like a mother to her and treated her like a daughter. Florrie was remarkably alert, aware and with it, right up to very near the end, and was much on my wife’s wavelength when it came to conversation. She spent her last few weeks in hospital and it was then her condition quickly deteriorated. She seemed to have relatively good health up to then and if that was not the case she was not one to let on. She is one of the last of a generation that had been markedly influenced by World War 2. I will always remember she would make do with what she had, not allow things to go to waste, and looked on life positively.

She will be much missed but she did leave a good legacy, and our thoughts are with those she was close to, who miss her too. By way of an ending, here are the words my wife spoke at Florrie’s funeral:

“When I came to England 22 years ago I knew only three people but soon after I was introduced to Auntie Florrie who quickly became my friend and remained so right up to her recently being taken from us. She was a kind and generous person and someone I could talk to about anything. I valued her wisdom, counsel and comfort. She taught me many things including passing on many cooking tips. Her passing leaves a great gap but I look forward to the day I will see her again, not in a frail body but a glorious resurrected one. I would like to read a poem that is about friendship …”

Friendship is a priceless gift

that cannot be bought or sold,

But its value is far greater

than a mountain made of gold.

For gold is cold and lifeless,

it can neither see nor hear

And in the time of trouble

it is powerless to cheer.

It has no ears to listen

nor heart to understand,

It cannot bring you comfort

or reach out a helping hand.

So when you ask God for a gift

Be thankful if He sends

Not diamonds, pearls, or riches

But the love of real true friends.