A week ago I posted on my blog an article titled: “Christian child forced into Muslim foster care”.  I did so in good faith, satisfied that my sources were sound (it was based on a Times story after all and was backed up by several other news outlets), and without trying to over-sensationalize. Like most of what I post, I do so because I felt the story and my take on the story to be a significant corrective to what is and is not reported in the news and to raise awareness concerning the issues as I see them. In this case, it seemed to me about political correctness gone wrong and local authorities over interfering to promote their flawed ideology. 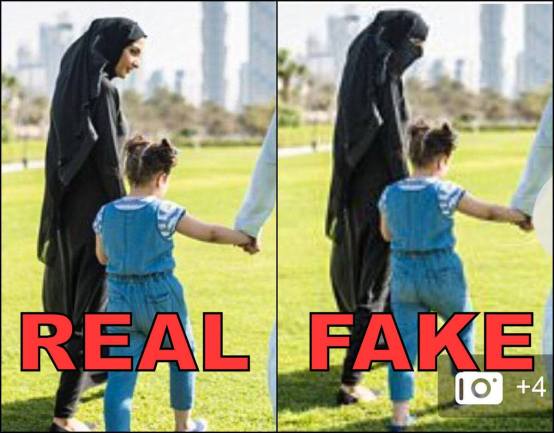 When I shared my article on my Facebook page, there was mixed reaction, ranging from disgust at the insensitive nature of the way authorities went about placing the child to skepticism of the Time’s report and a belief that cultural assimilation is a good thing. Then there were two who questioned the veracity of the sources. One posted a meme (shown above) to make the point that the newspaper had added a veil to the face of the Muslim foster mother with the likely intention to stir up anti-Muslim sentiment. Another posted an article titled: “How the press lied about the little girl staying with Muslim foster parents. Here are the facts.”

While I was not convinced these two pieces conclusively demonstrated the Times story was fake news, I was open to the possibility and that I might have to publish a retraction, all too aware the press does lie. Checking today via Google search if there was further light to be shone on the story, I found things were pretty much as I left them one week ago. The one thing I had seen since I added my article earlier was that one friend had posted a link to a story titled “Fury as Tower Hamlets Council places Anabaptist child into Biblical Unitarian foster family” on her Facebook page, which was a spoof of the Times story, which was liked by a number of friends in the “usual suspects” camp, and indicative that the mood of some does not quite match my own.

I am still open to be proved wrong regarding my original posting (and to retract what I wrote if I am). Nevertheless, my worries for the culture, in particular regarding what is best for family life and those statutory bodies with a responsibility to safeguard children etc. too often over-reach, and concerning the integrity of the Press, by not providing a balanced coverage and even falsifying reports as well as hate mongering, remain. Even so, I do need to be vigilant checking out the facts and measured when giving an opinion!