I have to make a confession – I do not read the traditional paper version daily newspaper much, which is sort of relevant given I am about to give an overview of them. In mitigation, I do read online quite a bit, although my reading tends to be somewhat hit and miss, dependant on what is pointed out to me, e.g. on social media, and stories I wish to follow up, e.g. through Google searches. Very occasionally, I buy a newspaper when I am out and about, and if I am out somewhere and there is a newspaper is lying around, typically “the Sun”, I read it. I do so mindful that news coverage may be skewed and superficial, but then it is always good to get other “takes”. I read my local newspaper, “Southend Echo” for local news, but stopped subscribing a while back. Mindful of the benefit of getting a more reflective take on the news, I started subscribing to “Time” magazine as a student. I should add – newspapers are not just about news of a more serious variety e.g. wars and disasters, but other stuff too. My interest in sport was to have a bearing on what I read. In closing this section, it should be noted there are other ways to get news coverage besides newspapers, e.g. video on demand, and that we are now seeing “alternative news”, which I will get to. 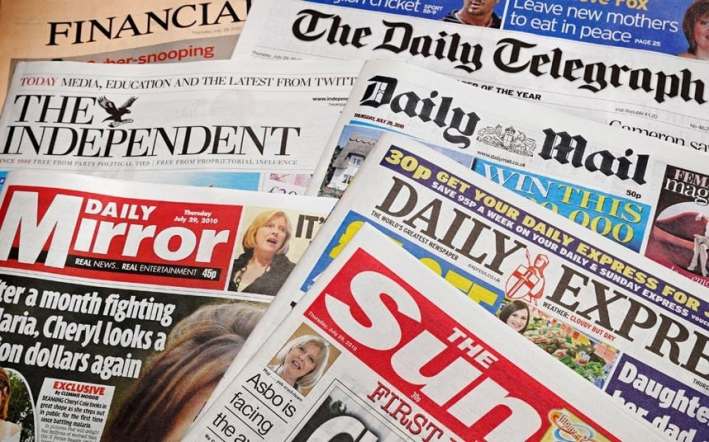 Going back to my childhood days, and growing up in a working class household, the newspaper I was exposed to most was “the Daily Mirror”. Around my time in the sixth form, I was exposed to the notion there were tabloids (for the plebs) and broadsheets (for the intelligentsia) and since I was aspiring to that group, my interest veered more towards broadsheets. This developed while at university when the three broadsheets I was exposed to, e.g. in the Students Union lounge, were the Guardian (left leaning), the Telegraph (right leaning) and the Times (maybe in-between but more right than left). Strangely enough, despite being more left than right at the time, I was more drawn toward the Telegraph and that remained so for years after until I began to sense the Telegraph had lost its way and balance. I had also by that time cottoned on to the notion that newspapers were politically biased and endured some stick by lefties around me for my preference, although I recall the Telegraph was favoured by some of the churchy types I hanged out with. Strangely enough, in later years I came to prefer the Guardian over the Telegraph (something I would not have predicted as a student) due to its coverage of social justice matters, where my interests lay. I also became aware, particularly by friends on the left, that some newspapers, e.g. “the Daily Mail”, pushed hate and prejudice, as well as by friends on the right that other newpapers attacked wrongly groups like UKIP and those critical of Islam.

Half way through my working life, “the Independent” was launched, and I became a fan for a while, partly attracted to the notion of independence because that that was where my instincts lay. In recent months, as various stories came my way because of the Internet, I have become disillusioned with this newspaper deeming it as anything but independent. While it may be deemed fair game to have a particular world view that happens to be different to my own (after all, all of us do and if we are honest we are prejudiced too) but it has become glaring and objectivity is the price that is paid. For example, I am convinced it sees President Trump as mad and bad and not only does that particular narrative govern the ways it reports on matters involving Trump but it then becomes selective in its reporting and I would be hard pressed to cite reports showing him to be sane and good (which I believe is the case). Sadly, a lack of balance when it comes to selection of material is a short coming most, probably all, news outlets suffer, and it seems newspapers have a tendency to be selective on what it is they report. It then begs the question as to whether this constitutes fake news, accusations of which have been widely banded around concerning all sides of the political spectrum. I would argue it does, because exaggerating aspects of news to suit one’s narrative and withholding news that doesn’t is just as fake as telling outright lies. I also wonder if journalists that are 100% sold out on reporting the truth exist these days and given mainstream news outlets are invariably owned by ideologically flawed and agenda driven owners, makes me wonder if such people operate. I recently reflected on the demise of great and objective journalism and a tendency to flabbiness and mediocracy in my criticism of the BBC but sadly this appears to fall on deaf ears.

All of which begs the question: where does all this lead us, especially if the “us” really wants to know what is going on in a world that has become extremely complex and yet what happens has profound consequences for all humanity, often bad? I don’t have a favourite British newspaper these days, and I am pretty sure the same goes with the USA, where I have a particular interest. My approach at getting to truth and balance is I need to read widely, delve deeply and remain skeptical, although I recognize this is an activity that can easily take over one’s life. I tend to compromise and cut the time spent on this activity by following news presented by those whose views more closely align with my own (something I suspect most people do and is why we see so many ideological fall outs). If I am to be pressed on the matter, I might settle for “the Times”, even though it is owned by a media mogul “baddie”. But I generally try to balance that by reading from a newspaper that can usually be counted on for offering a different perspective, e.g. “the Guardian”. And then there is alternative media, which has come more to the fore recently, and where I consider the future lies as people become disillusioned with the traditional news outlets. Notwithstanding its American focus, I confess to following Alex Jones (Infowars), for it offers a perspective not seen elsewhere, often aligning with my own, but I recognise any endorsement has to come with a health warning. I have even began to look at “Russia Today”. My current favourite news outlet has recently become my Internet home page – “the Drudge report”! As a final thought: understanding and fighting for truth is one of the noblest human endeavours, for it is the truth that sets us free.