Every so often the matter of the 11-plus exam and grammar schools crops up as it relates to my own town (Southend), typically triggered by articles in the Southend Echo and people chipping in with a variety of opinions. Despite efforts by the Labour administration to abolish grammar schools in the 1960’s and 1970’s, a number still exist in pockets of the country, including Southend. Here, there is selective education based on the ability of a 10/11 year old to pass the 11-plus. The arguments, often well rehearsed, continue to rage as to whether or not selective education is a good thing, including among politicians, usually right leaning, advocating for new grammar schools to be built. What is evident as far as Southend is concerned is that the grammar schools are popular and attract many pupils from outside the town, where grammar schools do not exist. 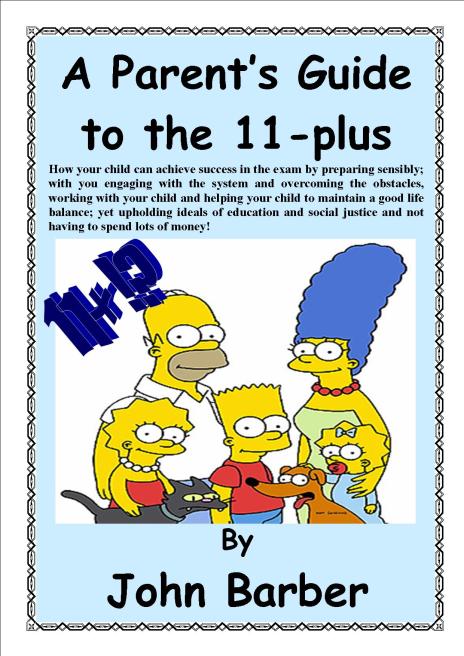 Like every parent with children of junior school age, (9 years ago) I was faced with the vexed question: what happens when mine has to go secondary school. It was for me Hobson’s choice between what many agreed were excellent grammar schools or comprehensive schools, which as far as our catchment went had all failed their Ofsted inspections. In order to get to the former, he needed to negotiate the 11-plus and pass, which was potentially achievable as he had the academic ability to do so. It was not helped that the Junior school was not all that interested in the exam and the local authority, other than letting it be known what was entailed, did little more. As a result, I took it upon myself to educate my son myself, with the aim to give him the best chance to pass while not neglecting what I considered education to be all about. We achieved our objective and he did pass. I wrote about our experience, along with guidance for parents in similar circumstances, in my book “A Parent’s Guide to the 11-plus” (click here for a free download) and while there have been changes in the seven years when I last updated it, much of what I wrote then applies still today.

Moving on, my son is now at university, having negotiated seven years at his local grammar school (Southend High School for Boys) (which I also had attended), having obtained decent if not outstanding GCSE and A-Level results. Some of the reasons for wanting him to go to this school rather than the local comprehensive, like good manners, good discipline, academic excellence, a safe environment and given opportunities to excel in all sorts of areas, were borne out, although I will never know what might have been the case if he had failed his 11-plus. One cautionary observation, and one that is open for debate, particularly for the benefit of readers enthused by this assessment, is that grammar schools aren’t for everybody, and they are more likely than non-grammar schools to be obsessed with exam success and tend to be harder on the “misfits”, and sad to say – bullying still does occur.

While as a family we have moved on, these thoughts were reawakened when I saw around the town posters advertising a website to do with what local parents need to know about the 11-plus. Checking out the URL, I was pleasantly surprised by the amount of helpful information it contained and even more surprised that it was an initiative of our local council, given that at the time when such information would have been helpful for us, they weren’t interested. I suspect part of the reason for their activism is that to our town’s collective embarrassment our excellent grammar schools manage to attract more pupils from outside the town than inside. Even so, credit where credit is due, for making this effort.

Best wishes to parents who have decisions to make, whether or how they are to help their children when faced with secondary school choices. And for those who fret about what happens should their child take the 11-plus and fail, especially when given extra tuition, fret not. I failed and ended up with three degrees! Moreover, your child is NOT defined by the school he/she goes to. What is most important than going to good schools and academic achievement is character and the part you as a parent can play helping to develop it.