A lot of water has run under the bridge since I wrote my last Labour party related blog. In it I discussed the proposition that with Jeremy Corbyn at its helm Labour were unlikely to do well at the forthcoming General Election. It happened that although it could not muster enough support to win it did a lot better than most people expected and most people reflecting back put this down to Jeremy Corbyn. It all goes to show how wrong we can all be and how things can change in a short time, which leads me to reflect: 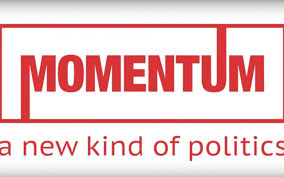 One notable phenomenon in recent months is the meteoric rise of a movement within / linked to the Labour party and its rise in influence and power. Momentum is associated more to Corbyn political values than those of most of his would be rivals to the leadership of the Labour Party: Momentum. I was triggered into thinking along these lines by reading a blog of my friend Julian Ware Lane, a Labour Party activist. The unexciting title was “Rochford and Southend East Constituency Labour Party AGM” but one statement intrigued me: “Quite why Momentum wanted a slate puzzles me. They want to control the local party, but to what end?” Reading some comments on Facebook and trying to read between the lines, it appears Momentum   sympathizers / members were trying to put forward an agenda, whatever that is, that will steer the local party in a certain direction and will do so through voting in their people and voting out those who aren’t.

According to its own website: “Momentum is a grassroots campaigning network of over 23,000 members and 150 local groups, which evolved out of Jeremy Corbyn’s 2015 election campaign. Momentum is mobilising the mass campaigning movement that we need to get Labour into government… Momentum evolved out of Jeremy Corbyn’s 2015 Labour leadership bid to build on the energy and enthusiasm generated by the campaign. Momentum has over 150 local groups, 23,000 members and 200,000 supporters, united by their shared vision for a fair and equal society. Momentum supports the Labour party, and works to increase participation and engagement in the party to enable it to win elections and enter Government. Momentum believes in an open, democratic Labour party, powered by its members”. In response to the question “What does Momentum want to do?” it responds: “Organise with communities across the country to put forward Labour’s ambitious plan for Britain and secure a Labour Government that:

According to Wikipedia: “Momentum is a left-wing British political organisation. It was founded in 2015 by Jon Lansman, four weeks after Jeremy Corbyn’s successful campaign for the Labour Party leadership. It has been described as a grassroots movement supportive of Corbyn and the Labour Party. It has drawn comparisons to the hard left entryist group Militant, with Labour MP Owen Smith describing it as a ‘party within a party’. Momentum itself and a number of political commentators characterise these accusations as unfair… In February 2016, Momentum set up a paid formal membership structure, under which those who wanted to join had to support the values and aims of the Labour Party. Under the constitution introduced in January 2017, Momentum activists must also be or become members of the Labour party. As of July 2017, there are over 150 local groups across the UK and Momentum’s membership has risen to 27,000 members. Momentum describes itself as an organisation that “exists to build on the energy and enthusiasm from the Jeremy Corbyn for Labour Leader campaign, to increase participatory democracy, solidarity, and grassroots power and help Labour become the transformative governing party of the 21st century”. It campaigns on local issues and on topics within the Labour Party. The organisation states that it aims to organise local groups across the country to “encourage mass mobilisation for a more democratic, equal and decent society” and “assist members in making their voice heard in Labour Party debates. Momentum draws inspiration and cross-pollinates ideas with Syriza in Greece and Podemos in Spain, both of which were fed by practical, grassroots organising to counter the effects of austerity cuts”.

Strictly speaking, how a political party to which I do not belong conducts its own internal affairs is none of my business, and gloating over something that appears to me is more about turmoil is not something I want to be part of. Strangely enough, even though I have never been a member of the Labour party, I have had a soft spot for it ever since my teenage years. In my earlier blog, I set out a number of concerns I would want to be satisfied about, were I to throw my lot in with Labour, and that still remains. In some ways, Momentum represents many of the concerns that drew me to Labour all those years ago in a way that Labour post Jim Callaghan (except for John Smith) has not. It also relates to how, bizarre as it may seem, when Corbyn, the outsider, first threw his hat into the ring, I preferred him to various Blairite clone alternatives.

There is something about the way Momentum has gone about things, by its naivety, arguably extremism and what appears to be bullying tactics, that makes me wary, and this is not just a local matter but is likely happening throughout the country. It is true that Southend Labourites, pre-election time at least, many who had for a long time faithfully served and likely dominated the party, never struck me as enthusiastic about Corbyn, but that has changed with the recent influx of Momentum leaning new members. Yet for Corbyn’s disciples, most I reckon to be Momentum supporters, if there aim is to seek revenge or effect a coup, reminiscent of totalitarian purges, that would be a mistake. While ideology and honest debate do matter, I feel Labour does best when it is a “broad church”. I wish Labour well, mindful the local party has some good long serving members who have faithfully served with lots still to contribute, who deserve respect, as well as the new intake who subscribe to Momentum values. Looking at the disarray of the Conservatives and its policies that penalize the “have nots” and the lack of a credible opposition, we need a strong Labour movement that can put aside differences without compromising beliefs, take a balanced view, is united, and deals with the issues that matter!

One thought on “Momentum – good or bad for Labour”