I am still thinking about the exchanges between Tommy Robinson and Piers Morgan on Piers’ “Good Morning Britain” TV show (view here), where there were inevitable clashes between two people holding quite different opinions, and reactions to this on matters that are quite pertinent in today’s Britain, relating to attacks by Islamists and on Muslims as well as the Islamification of British culture, including support of Tommy (see here) as well as a good deal of antipathy by mainstream media. Taking Tommy to task on some of his more controversial statements and actions seemed to me reasonable, but shutting down debate and disallowing Tommy from criticizing a book (the Koran) and a religion (Islam), in a country that is supposed (although I doubt this is entirely true) to allow freedom of speech, is not. As for Tommy supposedly inciting Islamophobia, I am inclined to give him the benefit of the doubt. 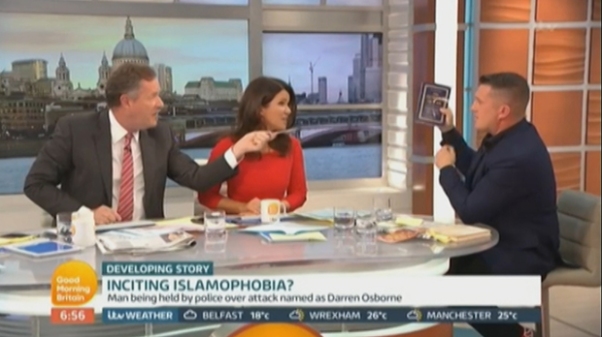 I have written recently on matters relating, e.g. “London, Manchester, Tommy Robinson and where next” and “Islamic terrorism – call it for what it is” and I wonder what more I can add. I was reminded last night, at my church prayer meeting, we (Christians) should focus on trying to better understand and empathize with as well as praying for Muslims and, at least at a local level, our watchwords being “winsome” and “friendship”. Ever since I began to engage with Muslims in my student days, that has been my main approach. As Christians, we are told to speak the truth in love. We are also called to love our neighbour, irrespective of his/her religion. I wonder if Tommy sometimes speaks the truth but NOT always in love (and sadly his lack of sensitivity to Muslim sensibilities may well be taken by some as a cue to carry out Islamophobic attacks), and while Piers purports to speak truth in love, it seems to be merely a veneer. Neither position is helpful to resolve matters. As I look around, I see a culture of appeasement and acceptance (encouraged by most of those who exercise a degree of power and influence and wanting to minimise social unrest) opposed by that of fear and division (sometimes, sadly leading to hate and attacks on Muslims), with not enough in-between. Yet, as I have argued, I dispute the narrative that anything of a concerning nature perpetrated by Islamists is but isolated occurrences (e.g. around 100 Sharia courts in the UK is NOT isolated), and if we ignore these things there will likely be dire consequences.

I fear that it may already be too late to reverse the onslaught of some of the less helpful aspects of Islam e.g. Jihad and Sharia law and for isolation from non-Muslim influences and for Islamic belief and practice to takeover the British way of life, that a plain reading of the Koran and an observation of recent events lead me to believe is intended, not just by a tiny minority deemed as extreme and thus ignored, but many “normal” Muslims, and this will increasingly happen. But I live in hope, mindful taking this middle of the road position makes me liable to attack from both sides. Much is that hope is around people turning to Jesus, who is the only true way.