An online definition of “conspiracy theory” is: “a theory that explains an event as being the result of a plot by a covert group or organization; a belief that a particular unexplained event was caused by such a group and the idea that many important political events or economic and social trends are the products of secret plots that are largely unknown to the general public”. Since I began my quest of finding out what really is going on the world and trying to understand why we see the astounding things happening around us, I have frequently come across conspiracy theories as well as considerable disdain by the many who debunk such theories. 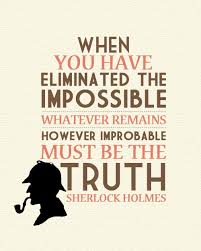 Examples of conspiracy theories include: John F Kennedy being killed on orders of the deep state who he had upset and 9/11 being orchestrated by the globalists in order to get America to go to war with Iraq and after that other Middle East countries. On these and other matters, I am keeping an open mind because while I am yet to be convinced I am not convinced by the official explanation either. A common theme among some of the conspiracy theorists, at least those whose interests coincide with some of my own, is that there is a tiny, powerful elite who control much of what goes on in the world and wants to bring about one world government.

But there is something in what Gandhi says and what Sherlock Holmes says and it is why that although I remain skeptical on much I am told these days that I am not already convinced about, I will not be deterred from seeking the truth, given I do not trust government nor mainstream media, although I recognize in both there are honest elements, but even there hardly any have the big picture and can say for sure what is going on. It is for that reason I follow the likes of David Icke and Alex Jones (best to check out what they do say, and it is a lot, by going to You Tube and typing their names) and have over these past few weeks watched and studied a lot of what they have said, for a lot of it is new to me yet contains credibility. I would probably counsel people who want  to find out what these men say is do so but exercise caution given the counter cultural alarming nature of what they have to say. What I do find worrying is attempts to shut these men down by the establishment in order to promote their own agenda, for as Benjamin Franklin says:

I do this despite attracting ridicule, realizing these men have been much vilified. While one reason is they have the temerity to challenge the narrative most people buy into and those in power would want us to believe, they do exhibit quirky behavior and make some outlandish claims. But having listened to what they have had to say and studied it, while I reject some aspects and keep an open mind on other, a lot of what they say makes sense and provides a reasonable explanation to what goes on. I look forward to a day when all truth will be revealed, when we will all be in for surprises. Meanwhile, I will do what it takes to be like the children of Issachar.