I have been hearing a lot recently, especially from them referred to (usually disparaging) as conspiracy theorists, of “Deep State”, and for these it is the powerful forces within or linked to government, in this case of the USA, that are intent on undermining and eventually overthrowing the current elected President. 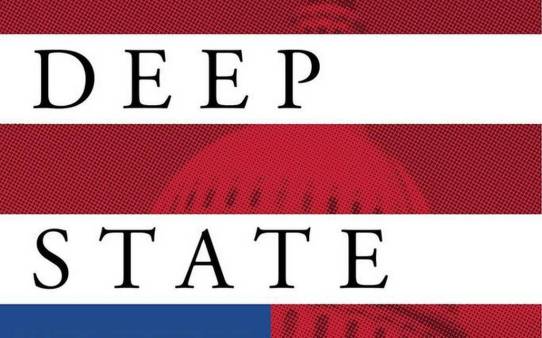 A definition is: “a body of people, typically influential members of government agencies or the military, believed to be involved in the secret manipulation or control of government policy”. A Wikipedia article “Deep state in the United States” begins: “Some notable figures in the United States have for decades expressed concerns about the existence of a “deep state” or state within a state, which they suspect exerts influence and control over public and foreign policy, regardless of which political party controls the country’s democratic institutions. “Deep state” has historically been associated with countries like Turkey, where sophisticated shadow governments allegedly control or influence key aspects of state policy, but the term has gained attention in the United States as the Trump administration has struggled to control its bureaucracy in the face of leaks from the intelligence community.”

According to “conspiracy theorists” like Alex Jones, America is in a state of civil war, with the deep state taking the lead in trying to overthrow Trump, who in his attempts to drain the swamp have messed with powerful forces who are now using their formidable arsenal and tentacles of influence to retaliate in what seems to have given rise to a vicious battle, whose outcome is yet to be realised. Already, one of Trump’s senior team, Mike Flynn has been forced to step down and attempts are being made to do the same with another, Jeff Sessions. The common factor is inappropriate Russian involvement and Obama’s expelling of Russian diplomats just before he stepped down has helped paved the way for such attacks.

I thought hard before posting this because I feared being misunderstood and besides I do not have a good enough grasp of all the pertinent facts to go much beyond expressing concerns, something I also fear many good people are unaware off and as it is my avowed goal for the few years I have left to watch and pray but also warn, that is what I will do. Besides which, my instinct is we have a story that is beginning to unfold that is not so dissimilar to Watergate (which I remember well), and yet because of the implications may have far more profound consequences. The matter was raised to a new level when Trump tweeted in typical style that before he was elected as President, President Obama had ordered his telephones to be tapped, a charge which Obama vehemently denied. Interestingly, when I “googled” to find what were the exact words, my first page of hits was mostly to do with different mainstream media attempting to discredit Trump’s claims (including today’s standout BBC report: “Trump wiretap: FBI chief Comey ‘rejects’ allegation“).

We are now waiting with baited breath for the evidence of Trump’s claim to be fully revealed and to find out whether the assertions of certain conspiracy theorists can be substantiated beyond all shadow of doubt. While certain folk will want to discredit me for having the temerity of raising this matter now, there already is a lot in the public domain that leads me to believe Trump’s claim and the conspiracy theorists “deep state” claims may be true (check out here, here and here), with no doubt much more to follow in the next few days, and consequences to follow that. Realising how easy it is to take sides based on our own prejudices, I reckon we do well to hang fire, awaiting the outcome of a fair investigation that will hopefully uncover the pertinent facts. Ultimately, what matters most of all is for the truthful to be vindicated and the liars to be exposed, and I hope that even my detractors will agree with me on this.

One thought on “The Deep State, Conspiracy Theories and Watergate”