Today I learned of the death of Jill Saward. In the BBC report: “Ealing vicarage rape victim Jill Saward dies” I read: “A woman who became a sexual assault campaigner after she was raped during a burglary at her father’s vicarage has died after suffering a stroke. Jill Saward, then 21, was sexually assaulted by two men in Ealing, west London, in 1986. Her father Michael, and her boyfriend were severely beaten. At the end of the trial of her rapists, the judge said her trauma “had not been so great”, sparking outrage. Ms Saward was the first rape victim in the UK to waive her anonymity. She went on to use her public profile to campaign for the victims of sexual violence. Ms Saward, 51, who was also known by her married name Drake, had three sons and lived with husband Gavin in Hednesford, Staffordshire. In a statement, her family said she had dedicated the past 30 years of her life to helping other people”. 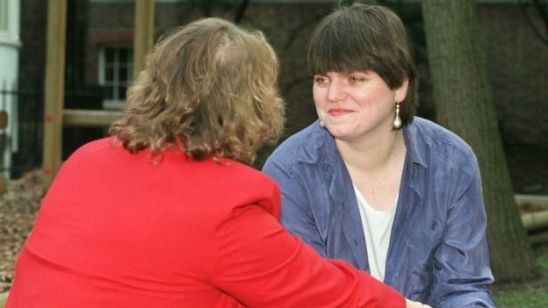 Another report titled: “Jill Saward, campaigner against sexual violence, dies aged 51” reads: “Tributes have been paid to Jill Saward, who became a campaigner against sexual violence after she was raped in her father’s west London vicarage more than 30 years ago, following her death from a stroke at the age of 51.Saward said 10 years ago that she did not want to be known for ever as “the Ealing vicarage rape victim” after she endured one of the most notorious sexual crimes in recent history. “Something different would be nice. But it’s not going to happen now.” … A spokeswoman for Rape Crisis England and Wales said Saward had been “a good friend and valued supporter over three decades. “Jill was able to step outside of her own harrowing experience to highlight the needs and rights of all those impacted by sexual violence … Jill was courageous, pioneering and an inspiration. She will be sorely missed.” She leaves a husband, Gavin Drake, three sons, and a sister, Sue.” That she left an enduring legacy is evidenced in yet another report: “Jill Saward: How Ealing vicarage case changed treatment of rape victims“.

I suspect most who read my blogs will not know of Jill Saward (and there is no reason why you should), but those who do, especially her family and friends, I share your sorrow and offer my condolences. I remember the horror I felt all those years ago when I learned of the story . I remember later reading the book she wrote “Rape: my story”, which detailed her experience and among other things the message of forgiveness. I recall my own pain remonstrating with God as to why this innocent young girl, the daughter of a man of God, along with her father and boy friend, should have suffered as she did and then later treated so abysmally by the Criminal Justice system. While I lost track soon after that, I did become aware of her part in campaigning (successfully) for changes in the way victims of sexual violence were treated and their attackers, educating those involved in sexual violence matters and in bringing comfort to those who were subject to sexual abuse in similar ways she had been.

There is a lot more to this “Ealing vicarage rape victim” than what I have outlined. I see in Jill one who was a brave woman, who despite being dealt such a cruel blow, turned it around to help others, forgive and not be bitter. In all sorts of ways I am able to admire Jill, not least her refusal to be defined by her traumatic experience yet use it to help others and also to live a full life. Like Jill I have experienced early life trauma, the effects of which have never entirely left me and as with her is part reason for my own suicidal thoughts and depression, and like Jill my tendency is not to let on and maintain a stoic persona, but Jill’s example of overcoming and leading a fruitful life will ever be an inspiration. I have seen some apt tributes by those who were blessed by her life, one being: “I find comfort knowing that she has fallen into the arms of a loving God. We are lighting candles for her and thanking God for her life.” As has become evident in the many tributes to Jill, her vibrant Christian faith had been a major factor throughout her life. Although I never met you, thank you Jill for touching so many lives; now RIP!