The Gasworks, a few hundred yards east of the Pier, along the Southend promenade, was once a prominent feature (as well as a red light district), along with its pier where coal was unloaded before going over to North Sea gas, but with decline the site became a near empty eyesore before being redeveloped for housing and a hotel, that includes a pub come restaurant: “Brewers Fayre”, standing on the site where Esplanade House once stood. (It so happened around the turn of the millennium it had been taken over by the NatWest bank. I worked there for a while fixing the “millennium bug”). 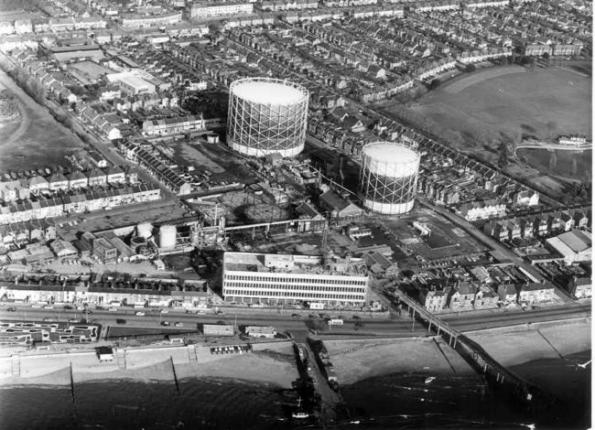 It happened that on Saturday, following a busy few days, my sister popped round and suggested we go out for a spot of lunch. It came down to a choice between an old favourite, “Toby Carvery”, and one my sister knew, but I was hardly aware off, and it offered great lunchtime deals taboot. As well as wanting to extend my dining repertoire and the nostalgic, curiosity factor, the prospect of enjoying great value grub in a nice setting was why on this occasion the gasworks received the nod over Toby. So off we went …

It wasn’t too busy (we arrived a little after 2pm) and we found the surroundings to be cosy, offering a great sea view if it wasn’t for the sea wall hiding part of that view. Between us, we decided what we wanted and went up to the bar to order our choice of lunchtime special. It turned out the special only applied to weekdays and we had to revisit the menu choosing from the wider, more expensive options. Me and my sister went for the mixed grill without any of the extras, with my sister making three special requests to adjust, quite reasonable and agreed. My wife chose tempura prawns (starter) and sticky toffee pudding (dessert). Me and my sister selected unlimited fizzy drinks and my wife unlimited tea (all serve yourself).

Food was served after an acceptable wait. It turned out that none of my sister’s three requests had been actioned but they were, without fuss and speedily, once it had been pointed out. We enjoyed our mixed grill and my wife loved her prawns, although the dessert  didn’t quite have the wow factor. The drinks worked well and being a connoisseur on these matters, my wife declared the tea offering was one of the best she had come across. While waiters weren’t running around to see if everything was ok (we had asked for the dessert half way through, but maybe the set up was not posh enough) they were all pleasant and did their best to accommodate our preferences. We enjoyed our meal and it turned out to be a nice place to hang out.

In summing up, the food was good but not outstanding and portions were generous but not enormous; as for value for money, it was fairly good but not as good as if it might have been if we had visited during the week; the ambience was fresh and clean but also warm and cosy; the service was fairly but not greatly efficient, yet the staff were pleasant and made us feel comfortable. It is a place I would happily visit again, probably to try out the weekday breakfast or have lunch with a friend or business acquaintance. Overall, we enjoyed our experience and I was impressed with Brewers Fayre. I can happily recommend it to friends, albeit with certain caveats. I can envisage re-visiting the gasworks sometime soon.