Recently a friend of mine shared a video (see here) that tries to answer the question and justifies why President Obama refuses to use the term ‘radical Islamic terrorist’, which squares with a CNN report (see here) titled “Obama: Why I won’t say ‘Islamic terrorism‘”. I watched / read both carefully, and concurred with some of the points brought out, particularly that most Muslims are peace loving, using terms like “Islamic terrorist” is as much an affront to Muslims as to Christians if we used the term “Christian terrorists” (and evidence suggests some do exist), and his approach is more along the lines of building bridges rather than walls. 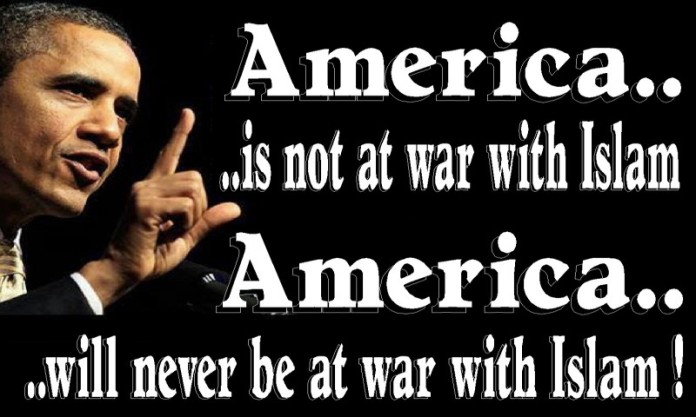 There is no shortage of material we could consider when trying to answer the question: “Does Islam promote violence?” One item that is pertinent, considering more the European situation, I found to be particularly interesting, which has the title: “When will our politicians accept the reality of Islamic terrorism? We are enduring a summer of terror, but our leaders are in denial”. The article begins and ends thus: “How is your Merkelsommer going? For now, Britain seems to be missing the worst. True, a couple of men of Middle Eastern appearance tried to abduct a soldier near his base in Norfolk for what was unlikely to have been an interfaith dialogue session. But Britain’s geographical good fortune, relative success in limiting weapons and our justified scepticism of the undiscriminating ‘open borders’ brigade mean that we have so far been spared the delights of what Angela Merkel’s growing army of critics refer to as her summer of terror… So as the public continue to move to the right, their representatives will continue to stampede to the left. And the Merkelsommer madness will continue dragging on into the autumn. Which could be not just the autumn of this year — but the autumn of liberal Europe.”

As people who read my blogs know, I have long taken an interest in Islam, considered the possibility and actual ramifications of an Islamification of the British culture, and have befriended Muslims. I have a number of Muslim friends and am of the view most Muslims I have come across are peaceful, upright citizens. Yet I have qualms, like most of our leaders do not sufficiently understand the nature of Islam, who have been sold the idea propagated by well meaning Muslims that Islam is essentially a religion of peace that has nothing to do with promoting violence. We are finding our leaders are much more inclined to make concessions to Muslims than to Christians, who are being increasingly marginalized in our culture by liberal biased, politically correctness. Hardly, a week goes by when we learn of some new atrocity, perpetrated by those who claim that theirs is the correct understanding and application of Islam.

In one article, written by a Muslim scholar, titled: “What Does Islam Say about Terrorism?” the author argues: “Islam, a religion of mercy, does not permit terrorism”, and makes several quotes from the Quran to back up this statement.  In another article, written by a Christian scholar, titled: “Does Islam Promote Violence or Is It “A Religion of Peace?“” he considers the proposition: “Islam is a religion of peace. Islam does not tolerate wanton murder”. He makes the point, that in contrast to the teachings of Jesus, which is decidedly non violent in its emphasis, that the same is not true when it comes to Islam: “By most conservative counts, the Quran contains over 100 passages that call Muslims to take up arms against unbelievers in the name of Allah”, and he quotes several verses from the Quran to back up his argument. Here I quite accept that arguing from the Quran and the Bible will result in differing ideas.

After all, even if it can be argued that Christianity is not about promoting violence but rather it is the peaceful proclamation and acceptance of the gospel message that is its main thrust, history suggests otherwise, e.g. the Crusades. This is certainly true regarding Islam, where its advance has often been the result of military conquest. I suspect few of our political leaders understand the true nature of Islam or Christianity and take the view that both religions are about being nice and those who aren’t have no right to be called Muslims or Christians. That is one of the debatable questions. It is more complex than that and as far as Islam is concerned, theologically speaking it is far more than about practicing personal devotion and has implications as far as the sort of society we need to live in, and this could involve violence.

When it comes to choosing between the Obama and Trump, I see myself as somewhere in the middle. We need to build bridges and avoid creating unnecessary barriers. We need to recognize the good in people of all faiths and none, and providing people abide by the laws and respect the customs of the land in which they live, they are to be welcome. But there is no point calling a spade, a shovel and Islamic terrorism should be referred to as what it is. The world is facing a major threat from Islamic terrorism and both the US and Europe need to take proportional measures to withstand that threat.