I have to confess, I don’t know as much as I ought about Shimon Peres, who died yesterday. His funeral is tomorrow and will be attended by many prominent world leaders. He is the last of his generation, i.e. those involved with the founding of the State of Israel in 1948 and subsequent establishment. For that reason alone, he is a significant figure, and his death is a significant event. His part in helping to frame the Oslo peace accord and winning the Nobel Peace prize as a result is one of his many achievements. 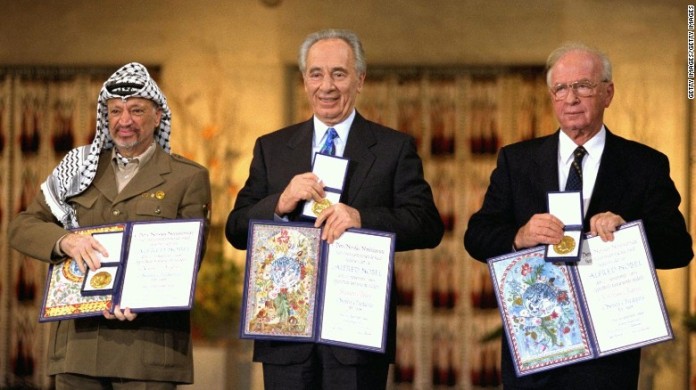 According to Wikipedia: “Shimon Peres … was an Israeli statesman and the ninth President of Israel, serving from 2007 to 2014. Peres served twice as the Prime Minister of Israel and twice as Interim Prime Minister, and he was a member of twelve cabinets in a political career spanning nearly 70 years. Peres was elected to the Knesset in November 1959 and, except for a three-month-long hiatus in early 2006, served continuously until 2007, when he became President, serving in the role for another seven years. At the time of his retirement in 2014, he was the world’s oldest head of state. He was considered the last link to Israel’s founding generation…”. According to Israel Today: “The body of Shimon Peres lay in state in front of the Knesset on Thursday so that Israel could bid a final farewell to the last of its founding fathers, a man who in his 93 years participated in the rebirth of the Jewish state and nearly every major event to affect her thereafter. Early in the morning, Prime Minister Benjamin Netanyahu and President Reuven Rivlin laid wreaths on Peres’ coffin”.

One CNN report begins: “When asked how he wanted to be remembered, Peres didn’t mention a life of civil service. “I would like that somebody would write about me that I saved the life of one single child,” Peres said in 2004. “This will satisfy more than anything else.” Perhaps a better answer came a decade earlier. “I feel like a person that has served this country rightly and properly,” he said. “And that is, in my judgment, the highest degree a person can feel.” On this day, there are few Israelis who would disagree”. Not that Hamas would see it quite like that according to The Times of Israel report: “Hamas calls for ‘Day of Rage’ during Peres funeral. Terror group says ‘Palestinian people are very happy’ at former president’s death, calling it ‘a new phase of weakness’ for Israel. The Hamas terror group urged Palestinians to hold a “Day of Rage” on Friday, coinciding with the state funeral of former Israeli president Shimon Peres, which will be held in Jerusalem on that day”, although later in the report it quotes Hamas president: Palestinian Authority President Mahmoud Abbas who expressed sadness over Peres’s death. “In a statement, Abbas said he has sent a condolence letter to Peres’s family expressing “sorrow and sympathy.” He called Peres a partner in reaching a “peace of the brave” with the late Palestinian leader Yasser Arafat and prime minister Yitzhak Rabin. The three men shared the 1994 Nobel Peace prize for reaching the Oslo interim peace accord. Abbas said Peres “exerted persistent efforts to reach a just peace from the Oslo agreement until the final moments of his life.””

History (but more importantly El Shaddai) will judge whether Peres helped to create peace or perpetrated an injustice to the Palestinian people. I take note that this is a significant event and Peres was a remarkable man. In principle, I continue to support the setting up of the State of Israel in 1948, and deplore Palestinian terrorism, along with elements of hatred toward Jewish people, as much as I do Israeli injustice and intransigence, and continue to seek a balanced understanding and wish to play some part in realizing the dream when Peres and Arafat agreed a peace deal in 1994. And as for his part in trying to bring about peace and reconciliation, Peres should be remembered with honour, whatever his faults.