A couple of articles appeared on Facebook page today that aroused interest as it relates to issues that I have followed from afar for some time. One is titled: “Gafcon Statement on the Appointment of the Bishop of Grantham” and the other “The ‘gay’ bishop of Grantham and the eroticization of the Church of England”. (A further imo helpful article also arguing against the appointment is titled: “Conservative Anglican vicar criticizes church leaders for appointing gay bishop“– ed).

The story relates to newly appointed bishop, Nicholas Chamberlain, who has recently admitted, under pressure from the press, to be living with his same sex partner, but because he has agreed to be celibate he is allowed by the church to continue as bishop. Understandably, this gives rise to different responses ranging from the negative one found in the two articles to a good deal of support for the bishop continuing in office, including by some prominent evangelicals – at least two have posted thoughtful, supportive messages on their Facebook pages (check out here and here). 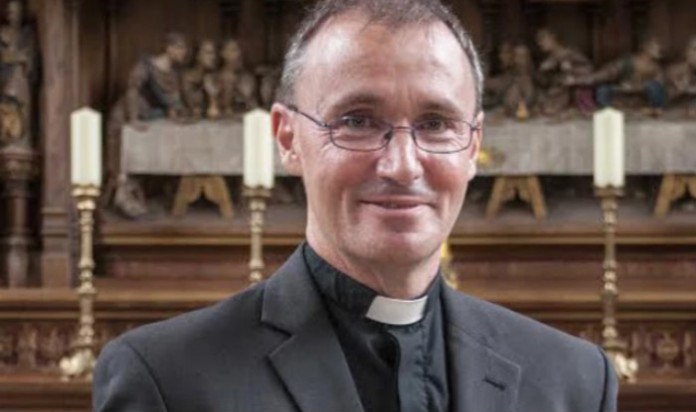 I believe this is a picture of Nicholas Chamberlain (apologies for the one earlier I included, which was posted in error) – ed

It is not my intention here to elaborate on the two articles, whose points are well made, or to discuss the implications, rights and wrongs of the appointment in detail, or to discuss the wider issues of homosexuality and how the church should approach this subject (which I have already reflected on in my writings and blog posts, on my website). I should say, I was spurred to write when someone close to me made the point that if God is good, and given some of us have had lifelong homosexual tendencies (regardless whether we act on them), it is rather cruel that any such person should be excluded from any of the life of the church. This subject will not go away soon, but it is one that seriously threatens the future of the Anglican communion, as discussed in my article when the archbishops from around the world recently met to discuss these matters.

It is pertinent that what we are seeing enacted inside the church is significant for it is against a backdrop of increasing societal vilification of those who do not support same sex relationships, often directed toward Christians, and one where regrettably the church has been hard pushed to rebut because of internal confusion. The church’s response must not be to put up or shut up but to live truth, righteousness and justice. We have recently seen instances of a number of clergy have come out openly as being in non-celibate same sex relationships and in a recent letter to the Times some have admitted to marrying their same sex partner, yet no action was taken by the church or is likely to be. While Anglicanism has had to endure many crises, one wonders how long this state of affairs will be allowed to continue before something gives, and what further changes in the Anglicans communion we might expect.

As a non Anglican, I have quite a different view of church leadership to Anglicans. I don’t, for example, support the three tier idea of bishops, priests and deacons, and have often cited the views of J.N.Darby, one of the founders of the Plymouth Brethren, a church I have long associations with, who believed the church was “in ruins” and, as it no longer has apostles we can rightly recognize, no one has the authority to make any appointment (logically leaving local assemblies leaderless or governed by consensus of its spiritual men – which as has been repeatedly demonstrated creates its own set of problems). Some of the  hardliners in the Brethren impressed on me in my early years as a Christian the Church of England was apostate and members who truly believed should disassociate themselves from the Anglican church because of its acceptance of apostasy. One example of this was the 1963 book, “Honest to God” by the then Bishop of Woolwich, John Robinson, which denied important doctrines and some key events of the Bible really happened.

Sadly, I came to find being “sound” was not enough, and the sort of churches I am more familiar with have their own set of problems (and I have seen much sanctimonious bigotry to put off gay folk for life), but that is another story. I should add, like all denominations, there is these days much variation in practice, but the Brethren were most resistant in accepting female leaders and while not bad as gay or unsound ones, the fact is that many bishops in the Anglican communion these days fall into one of these categories, and it is an issue of grave concern for some, although arguably strength of character, spiritual depth, intellectual capacity and pastoral leadership should concern too. Ironically, the first Anglican priest I had much to with was my college chaplain, and he ticked all boxes, although in my then evangelical zeal I was rather dismissive of him.

As an outsider looking in, it is with some amazement that I find the Anglican church continues as a communion with some semblance of unity, and does so (somewhat cynically some might say) by adopting fudges where individuals can agree to disagree on many important issues and yet still remain Anglicans, and this goes far beyond the co-existence of Low (Evangelical), Broad (Liberal) and High (Anglo-Catholic) congregations. While some Anglicans have left and joined churches more in line with their views and vision, ranging from independent charismatic fellowships to converting to Roman Catholicism, many have felt adamant they should remain Anglicans and they can do so without ditching cherished beliefs. Indeed, two of the Anglican churches in my own town, one High and one Low, who I have a a lot to do with, have had to face these very issues and as a result formed an alliance arising out of their common concerns.

Going back to the first article referred to, this represents the position of GAFCON UK which states at the end of the article that it “exists to provide fellowship and if necessary, an alternative oversight for Anglicans committed to biblical orthodoxy in England, Scotland and Wales, from a range of ecclesial traditions, evangelical and catholic, with special focus on those who are losing confidence in local and national church structures to maintain faithfulness to doctrinal and ethical norms”. How significant this development is when comparing with many other developments in Anglicanism I can’t say, but given the stakes are high for those who feel in this way, I suspect organizations like these will continue to play an important part in the life of some Anglican churches, and only time will tell if those churches will remain Anglican.

As for the call of GAFCON that Bishop Chamberlain should not continue in this role, I am inclined to reluctantly agree. Entering a civil partnership seems to me to be going a lot further than having a David and Jonathan type of relationship based on deep friendship, and seems inconsistent with biblical orthodoxy. I use the word “reluctant” because the church ought to be inclusive and offer a spiritual home for all and a place where their gifts are recognized, including those of same sex sexual orientation.  I think there are also bigger issues and it is encapsulated in one verse I often quote on these occasions, that we must: “contend earnestly for the faith which was once for all handed down to the saints” Jude 3. While I am loathe to tell my Anglican brethren what they should do and it is tempting to expand on my ideas about the church, I will confine my closing remarks to making three brief points about the church, mindful that I need to love and pray for the church and be part of its mission to make disciples of the Lord Jesus Christ and do justice:

2 thoughts on “Gafcom, gay bishops and the future of the Anglican church”