As readers of my blogs know, despite focusing on events closer to home, I have one eye keenly fixed on the US Presidential race, which continues to hot up. There are several reasons for this: I am a political junkie, what happens in the US as a consequence of the election will affect us in the UK, the two candidates who will be battling it out in November: Hilary Clinton and Donald Trump are significant insofar they are my least favorite persons from either party to stand, to name but three. What has given this contest a particular edge for this Evangelical (not that I like labels but it matters here as I will show) community activist, is the reaction of my counterparts on the other side of the Pond and what is the thinking of respected folk of the same ilk here in the UK, concerning the two candidates. I also believe that there are even bigger issues that overshadow that of who becomes President, and is why I write. 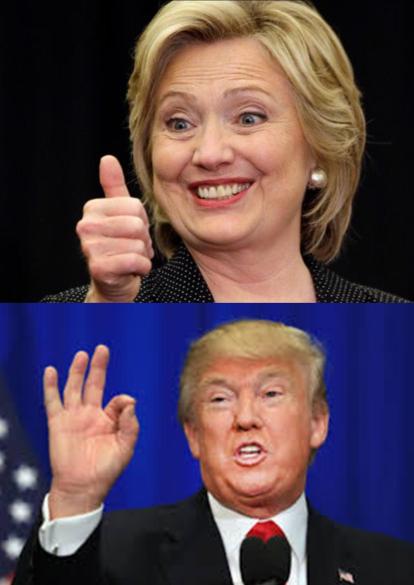 My last blog on the Presidential race was published six weeks ago and had the title: “James Dobson vouches for Donald Trump”. As with Christians generally, Evangelicals do NOT sing from the same hymn sheet, and it is as well that one’s political persuasion is or shouldn’t be a bar to cordial relationships or gospel endeavour. This was demonstrated recently in the arguments whether or not the UK should remain in the EU. While mainly good natured, it was not always the case because feelings did run high, and I have no doubt the same could be said for whether or not Trump would be a suitable choice for US President. The majority of my UK, Evangelical, community activist friends, at least if social media is anything to go by, would say unequivocally “No”. It is harder to work out the split as far as US Evangelicals are concerned but it is clear a large number do support Trump, including James Dobson. While my views of US Evangelical leaders are not always favorable, and that is putting it mildly, such that any endorsement they give I may well take with a pinch of salt, I happen to regard Dobson as one of the good guys, so when he endorses a candidate, especially someone as controversial as Trump, I want to know why.

This brings me to a controversy involving two leading exponents of US Evangelicalism, one representing the conservative wing: Wayne Grudem, and the other representing the liberal wing: Randel Rauser, although using such labels may be over-simplistic. They would appear to represent two different yet significant schools of thought among Evangelicals, specifically regarding the suitability or otherwise of Donald Trump. I should add that until two days ago I had not heard of either Grudem or Rauser. Grudem’s article, titled: “Why Voting for Donald Trump Is a Morally Good Choice” argues just that. He sets the scene by arguing that Christians have an obligation to seek the good of the country in which they live and while the candidates are far from perfect we should try to come to a view who would serve it best (and here I suspect most Evangelicals would agree). As far as Grudem was concerned, that person happens to be Trump. Although there were some matters I was not convinced about e.g. regarding his views on Israel, immigration and the Environment, when it came to three issues I see as particularly important: Abortion, Marriage, and Religious Conscience, I found his arguments compelling.  He is no Clinton fan as his “This year we have an unusual opportunity to defeat Hillary Clinton and the pro-abortion, pro-gender-confusion, anti-religious liberty, tax-and-spend, big government liberalism that she champions” comment shows. One issue that doesn’t have a parallel in the UK is it is in the Presidents gift to appoint Justices to the Supreme Court. As history shows, whether there is a conservative or liberal majority in that Court has considerable bearing on how these three issues have been dealt with, and has had profound ramifications.Grudem prefers Trump as the likelihood is if elected he would appoint conservative justices whereas Clinton would appoint liberal justices.

All this attracted the righteous indignation of Randel Rauser, who takes Grundem to task in his: “Wayne Grudem’s Endorsement of Donald Trump and the Moral Bankruptcy of Evangelicalism” article. While Rauser is probably right concerning Trump’s character flaws and some at least of his policy announcements, personally I was less convinced by his arguments. I felt his closing statement was particularly disappointing from the point of view of providing a credible challenge to Grudem’s argument: “If you want an example of why people walk away in disgust from the evangelical church, you need look no farther than this farcical defense of a demagogue simply because he promises to grant some special favors to your community. Here you have a theologian who, after teaching “Christian ethics for 39 years,” can only provide a defense of a demagogue that would work equally well in Germany circa 1932”. While I do have many reservations about Trump, especially his leadership qualities, and most adjectives I can think of when attempting to describe his character are uncomplimentary, and also concerning an Evangelicalism that is all too common among fundamentalist types, that ignores social injustice and the need to “love thy neighbor”, I feel it unfair and actually slanderous to accuse Trump supporters of doing so on an account of “special favors to your community” he might promise and, as one who studied Hitlers rhetoric circa 1932, I see nothing in what Trump has said anywhere near mirrors the statements of Hitler regarding his ideas around exterminating the Jews.

As I intimated at a beginning, there is the matter of the wider implications concerning the outcome of the US Presidential race, since it will affect the way the world at large is going – some say it is heading toward the evil rule by the AntiChrist rather than the fulfillment of the dreams of the Enlightenment of benevolent common sense winning through. I read today an article in Israel Today, with the title: “What Do Trump, Brexit and Christian Zionism Have in Common?” which sheds some light on what we are facing with the forthcoming US Presidential elections, even though I regard that publication as biased. Its statement: “As I see it, all three are powerful reactions to the same left-wing elitist bureaucracy that’s been trying to impose its multi-cultural, no-borders, one-world vision on the nations.  This utopian vision is essentially the one immortalized by John Lennon in his iconic song, “Imagine.” So intoxicating was the vision that the elite imagined it could accommodate the ruthless reality of fundamentalist Islam, expecting it to quietly take its seat at the table. When Jihadists began murdering and raping everyone in sight they tried to ignore it, telling everyone, including themselves, that Islam was a religion of peace” maybe just begins to shed light on an even more important matter and may begin to explain why some Evangelicals, who sadly are too often misunderstood and ridiculed by their supposedly more enlightened brethren, think as they do and, rightly or wrongly, see Trump as the one more likely to address their valid concerns.

As I said in my Dobson blog: “God is neither left or right (He is God) and we must trust in Him alone” and it seems to me the citizens of the US are faced as near as you can get with Hobson’s choice between whether to vote Hilary or Donald (and since I don’t have a vote I won’t be drawn in to declaring my choice of who is the “lesser of the two evils”), but I do need to be a watchmen in days when even our Christian leaders are being led astray and urge all to seek the Kingdom of God and His righteousness, and humbly to trust in God alone. As for the Christian decision, it is all a matter of conscience, and one which each of my Christian friends will have to wrestle with.

2 thoughts on “Hilary or Donald – the Christian decision!?”